The lefty reliever rejoins Cincinnati's bullpen on a two-year pact.

The Cincinnati Reds have re-signed southpaw reliever Manny Parra to a two-year, $5.5 million contract, reports Jon Heyman of CBS Sports. If the contract is meted out evenly, Parra will make $2.75 million each of the next two years.

The multi-year deal marks a huge reversal of fortune for the 31-year-old, who appeared to be coming to the end of his rope when he originally joined the Reds last winter.

A back-of-the-rotation arm in the Brewers' pitching staff for three years, Parra was eventually relegated to the bullpen in 2012 because of poor performance and longevity issues spurred on by an elbow problem that forced him to miss the entire 2011 season.

Once in Milwaukee's bullpen, things didn't get much better for the southpaw. Parra amassed a 5.06 ERA over 58⅔ innings in 2012, hitting the open market at arguably his lowest point possible. Despite his poor results out of the 'pen, the Reds decided to take a chance on Parra, giving him a one-year, $1 million pact for 2013. 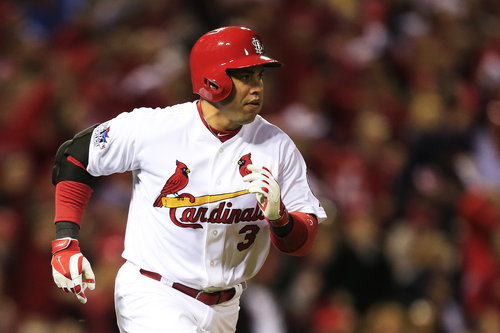 Beltran's agent has unveiled yet another suitor for his client's services.

Parra rewarded the Reds' faith in him, posting career-bests in earned-run average (3.33), walks per nine (2.9) and strikeouts per nine (11.0) over 46 innings of work. While one might conclude that Parra's success with Cincinnati was the result of small sample size, it likely has more to do with the Reds using him as a lefty specialist, which the Brewers failed to do to any real degree.

Righties have absolutely shelled Parra throughout his career to the tune of an 813 OPS, and 2013 was no different. The only way, then, to make him successful is to limit the appearances in which the batter has a platoon advantage. The Reds did just that this season, splitting his time against lefties and righties at just about 50/50; so while righties still put up a mammoth 893 OPS against him, the damage was limited by the minimal number of chances and, of course, the minuscule 475 OPS against lefties.

Whether Parra can continue to hold lefties at bay at such a low clip is anyone's guess -- his career OPS mark against them is 725 -- but his improved peripherals certainly seem to indicate that he's figured something out.

• Hall of Fame ballot announced | An annual exercise in frustration

• How to fix the Blue Jays | Complete series