Diamondbacks could be sole loser in 3-way Trumbo deal

The Diamondbacks give up patience and pitching, obtain power -- but that's all.

Share All sharing options for: Diamondbacks could be sole loser in 3-way Trumbo deal

After a first day of the winter meetings dominated by the typical inertia that grips unlubricated general managers (theory: the July 31 trading deadline has suffered in recent years because executives are less likely to get lit in their offices than in hotel lobby bars), the Arizona Diamondbacks, Los Angeles Angels and Chicago White Sox have unlimbered and consummated a three-way deal that sends OBP- and defensively-challenged Angels slugger Mark Trumbo and two players to be named later (one from each of the parties to the deal), diminutive D'backs center fielder Adam Eaton to the White Sox, and left-handed pitchers Tyler Skaggs (D'backs) and Hector Santiago to the Angels.

Whatever else happens at these winter meetings, this is going to be one of the most fascinating deals made because you have three also-ran clubs, the best of them 81-81 this year, trying to change their fortunes. The source of debate, and we'll have to wait for the 2014 season for this to play out, is if the teams took a step back to take a step forward.

From the Angels perspective, the deal helps make up for an incoherent approach in 2012 which saw them rent Zack Greinke at the cost of wringing the last drops out of a low-yield farm system, then pretending that a rotation of Jered Weaver, C.J. Wilson, Jason Vargas, Joe Blanton, Tommy Hanson and the Nestor Rendondo Studios was a worthy complement to Albert Pujols, Josh Hamilton and Mike Trout. The league-average starting pitcher had a 4.01 ERA this year. Despite working in a pitcher's park, Angels starters checked in at 4.30, 22nd in the majors. Skaggs, 22, was an Angels supplemental first-rounder in 2009 before being swapped to the Diamondbacks as part of the payment for Dan Haren (Patrick Corbin and Joe Saunders were in the deal as well). Baseball America rated Skaggs Arizona's top prospect heading into the season (Archie Bradley was listed as third). Skaggs struggled with his control, and while his bread-and-butter pitch is a big curve, when hitters can sit on your 89-mph fastball, depressing things are going to happen to you. The Angels get potential at an inexpensive price, which is more than their system could boast before the deal.

Santiago, going on 26, has done everything in the majors except manage catering. That includes closing, a job Robin Ventura gave him out of '12 spring training in what was a moment of strange whimsy. Santiago gave up five home runs in his first 10 innings of work, which in closing circles is a Donner Party-level disaster. Santiago bounced back in middle relief, then moved into the rotation when Gavin Floyd required Tommy John surgery. He pitched superficially well there with a very solid 3.56 ERA (120 ERA+) but given 4.3 walks her nine and a good hit rate despite playing in front of a defense that alternated Adam Dunn and Paul Konerko at first base and an outfield crew that looked like a Rod Serling teleplay ("Three Fielders in Search of an Exit"), his ERA probably wasn't representative.

Still, whatever the flaws of these two pitchers, they're not Blantons, not yet, and whereas Weaver-Wilson-add salad bar for only $5.99 was hard to project as a division-winning combination, but Weaver-Wilson-Santiago-Skaggs-Garrett Richards? That is at least a reason for hope, especially if Hamilton and Pujols can regain some of their lost value. 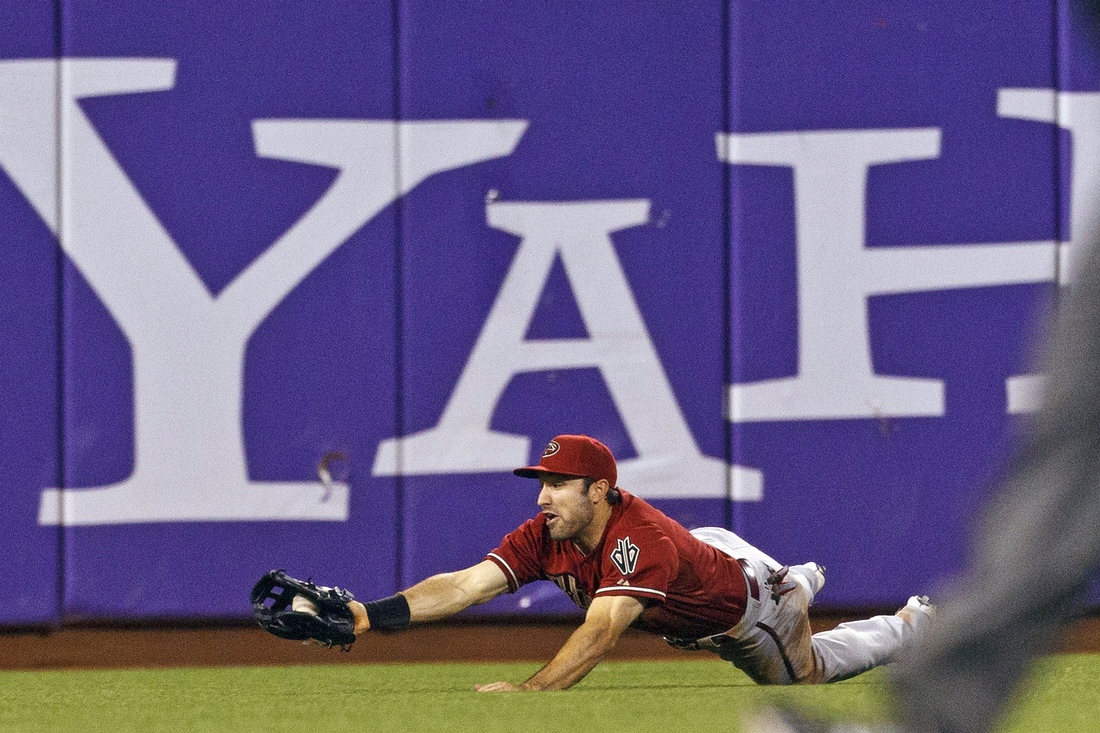 In giving up Mark Trumbo, the Angels surrendered a powerful hitter who might become a 40-home run man by moving to Chase Field. He'll give the Diamondbacks a second home run bat to go with Paul Goldschmidt, but that's all, as he's a confirmed over-swinger who has failed to reach the .300 OBP mark in two of his last three major league seasons. He also doesn't have a position. The D'backs apparently intend to play him in left field; he's also appeared at first base, third base, and right field. Given that and the inclusion of Adam Eaton in the deal, it's very possible the Diamondbacks have arranged to give away a needed pitching prospect in order to tread water. Sure, their aggregate outfield production (.265/.321/.396) was weak, the group combining to hit the fewest home runs of any outfield in the majors (37). But by the end of the season, with Eaton back from the left elbow sprain that severely curtailed his season, they could play a defensively excellent outfield of Eaton, A.J. Pollock, and Gerardo Parra. Eaton was the  least productive of the three, but assuming he recovers the plate judgment and basestealing ability that made him such an interesting prospect, the combination of superior defense and on-base ability should have more than balanced out Trumbo's advantage in home runs, and at a lower price than his arbitration-eligible replacement.

It is interesting to consider that if the Diamondbacks were less focused on home runs, they might simply have cut the Angels out of the deal and dealt Eaton for Santiago straight up, retaining Skaggs for their own use. 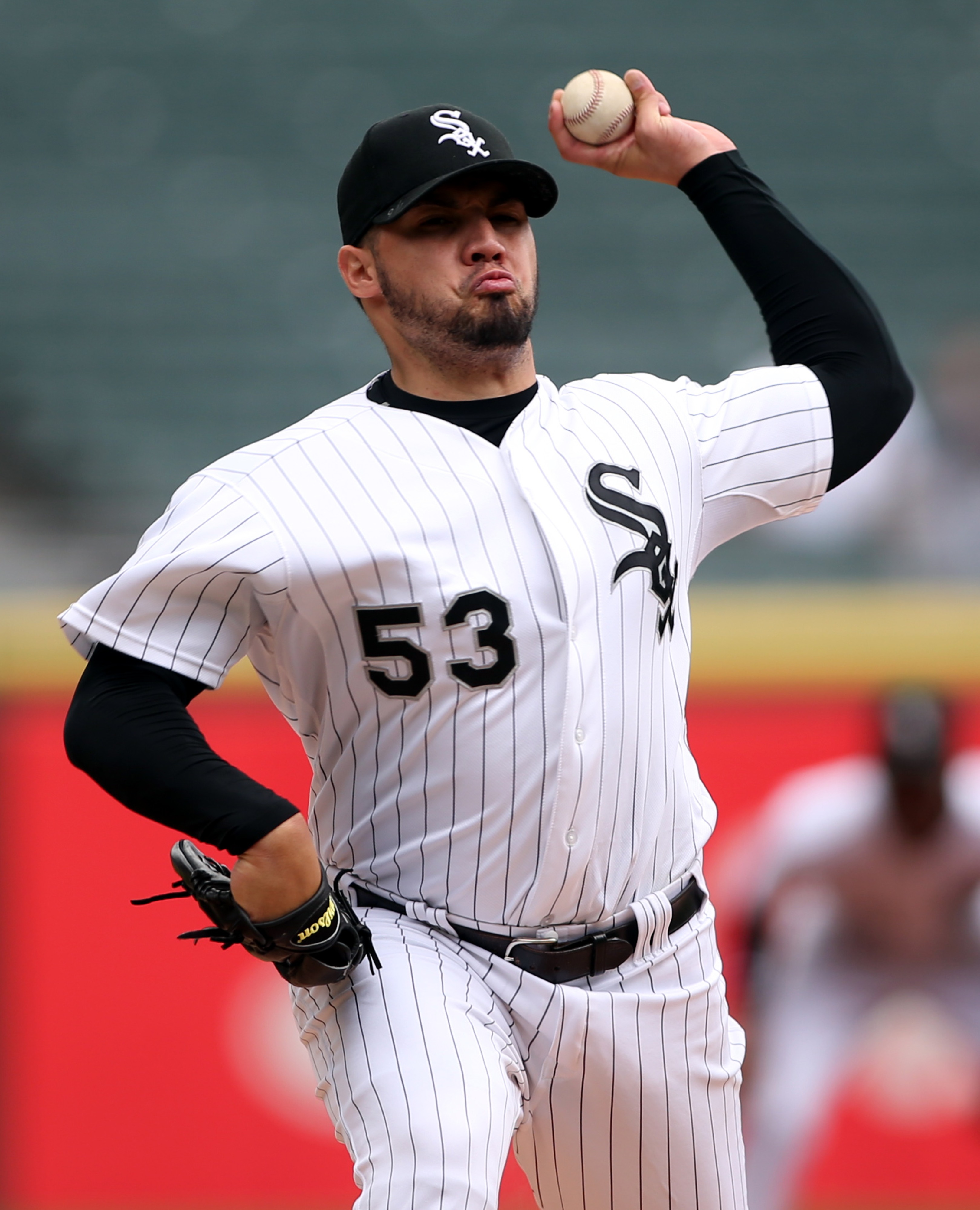 At different times over the last few years, the Diamondbacks have seemed intent on making both Pollock and Parra fourth outfielders.  Now they've effectively stated their preference for them over Eaton, 25. Time may show that to have been an incorrect ranking. Before Eaton got hurt, Baseball Prospectus's PECOTA projections had hit at .278/.356/.392 with a walk in eight percent of his plate appearances. Bill James was more optimistic at .291/.358/.418 with roughly a walk in nine percent of his plate appearances. He was a .348/.450/.501 hitter in 345 minor league  games, albeit at good places to hit. You can see from that profile that he has the makings of a solid contributor in the table-setting vein.

The problem is his short, 66-game season was contradictory. He worked the count like the patient hitter he had been in the minors (he averaged 85 walks per 162 games played, although the rate flattened out as he rose), but the approach resulted in just 17 free passes in 277 plate appearances. You might guess he was pressing to make up for lost time, and perhaps that would be right. We won't know for sure until he turns up at spring training with a team that drew 411 walks all year long. If he can maintain his identity around hackers like Alexei Ramirez and Dayan Viciedo, it's easy to imagine him and rookie Marcus Semien giving the team a new look. Semien is a great example of what is essentially low differentiation of self in a baseball context. In the minors, Semien took 98 walks in a season split between Double- and Triple-A. In the majors he took one in 21 games. Rookie jitters? Maybe. Skill level catching up to him? Possibly. Will it change? It will have to, because Semien, like Eaton, might not do enough to start in the major leagues if he's not exceptionally patient.

Three poor-to-mediocre teams tried to elevate themselves with this deal.

At the very least, Eaton should provide more defensive stability in center field than Alejandro "This is where I stand, right?" De Aza. Although the Sox' farm system has about as many useful position players as New Jersey has Komodo dragons, they do have some pitchers ready to go, including Andre Rienzo, who pitched decently in a 10-start audition this fall. They shouldn't miss Santiago much.

Three poor-to-mediocre teams tried to elevate themselves with this deal. For the White Sox, the outcome depends on Eaton rediscovering the strike zone. For the Angels, Santiago and Skaggs don't even have to be great; just league average would do. As for the Diamondbacks, they'll gain some home runs, give up some triples, and stay about the same. Their destiny awaits other moves, like a pitcher to replace the one they just traded away.

Update: The players to be named later going to Arizona are apparently outfielder Brandon Jacobs (White Sox) and right-hander A..J. Schugel. Jacobs, who went to the White Sox in this summer's Matt Thornton deal, is a corner outfielder who looks like he won't hit enough to hold down a job at the primarily offensive positions to which his glove restricts him. Schugel throws a sinking fastball but offspeed stuff is still a concept, which helps explain why (a) he doesn't strike out many hitters and (b) his being pounded at Triple-A. Neither really alters the evaluation of the deal.

• Roy Halladay: Pitcher of the century

• The best remaining free agents in a post-Cano world