For the second time in a week, Kevin Towers seems to undervalue one of his young players.

Mariano Rivera aside, closers are the most ephemeral, capricious, zephyr-like of all of baseball's creatures, and one of its most abundant. Chicago White Sox general manager Rick Hahn gave a strong signal that he is one of the enlightened few that correctly values closers when he dealt his young ninth-inning guy, Addison Reed, to the Arizona Diamondbacks in return for third base prospect Matt Davidson.

Rivera's value wasn't necessarily that, in any given season, he towered over his 9th-inning rivals, but that he was shockingly consistent. He was the most valuable reliever in baseball his 107.2-inning 1996 season setting up for John Wetteland, but ironically as soon as he started closing the anal strictures managers place on closers meant that his value was reduced. In 16 seasons as a closer he led the American League in saves just three times (the Yankees were too good to need him as often as, say, the 2008 Angels needed Francisco Rodriguez), and as measured by WAR, he was the most valuable reliever in baseball just four times. What is more interesting is the pitchers who exceeded him in saves in those years, not just K-Rod, but Eddie Guardado and Joe Borowski and Brian Fuentes and Jose Valverde. Rivera was there year after year; almost everyone else came and went. 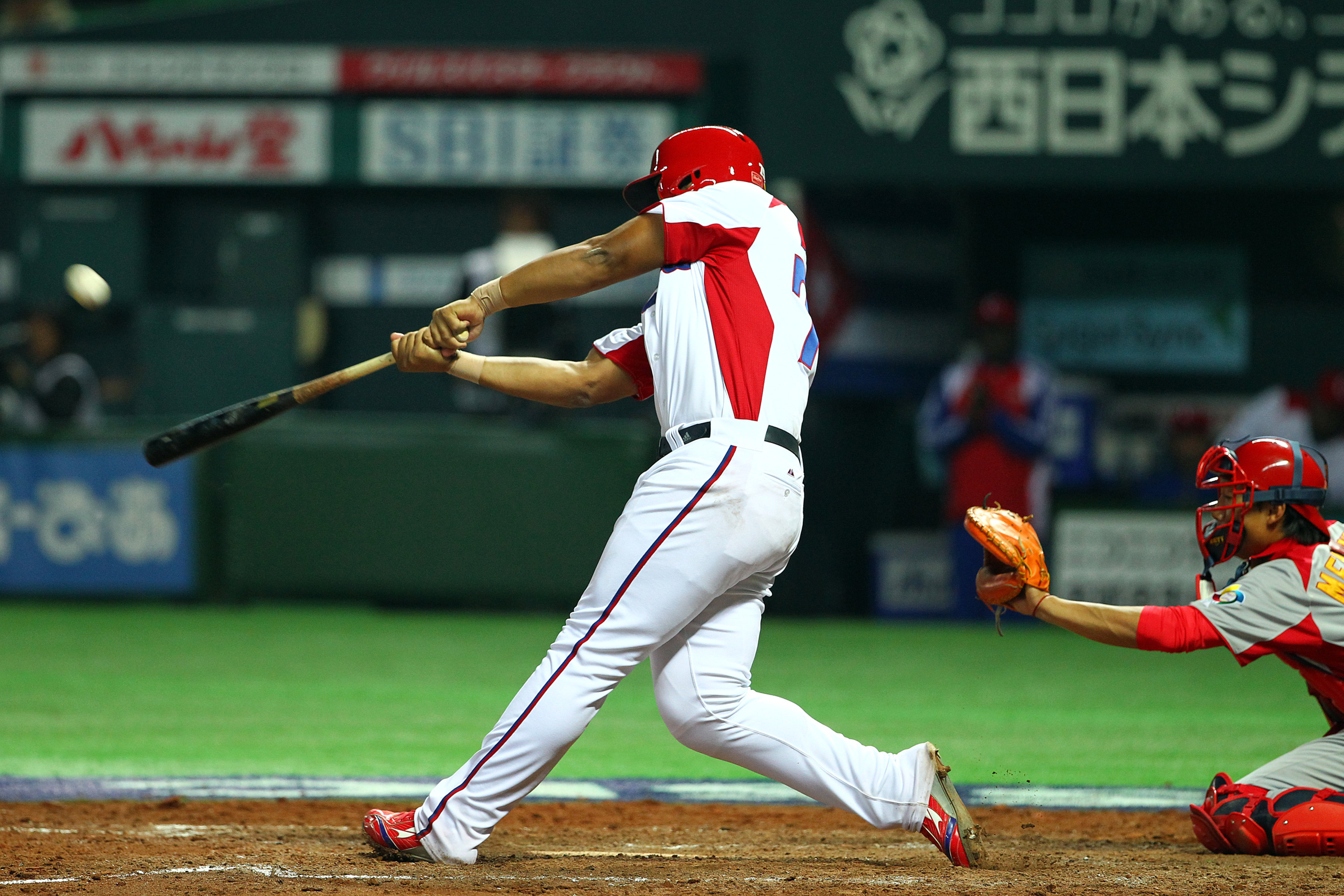 Jose Abreu (Koji Watanabe) After a 99-loss season, it was difficult to see how the White Sox would work to correct the pitfalls of their roster, but general manager Rick Hahn insisted he had a plan to make the team stronger and competitive for coming seasons. Such claims were easy to dismiss as the sort of lip-service you'd expect from a GM who inherited a mess from his predecessor. The Sox were rumored to be interested in some of the top free agents, including Curtis Granderson and Jarrod Saltalamacchia, but instead of spending the money and making a huge financial commitment to flawed players, Hahn has made adjustments to the roster that make sense not only financially, but serve the team's goal of getting younger. The Sox might not be contenders next season, but they've had a sneaky-good offseason in which they've attempted to plug up the biggest holes in their roster, which were almost all on the offensive side. When they dealt Jake Peavy to the Red Sox at the trade deadline as part of a three-team deal also including the Tigers, they got 22-year-old right fielder Avisail Garcia. Garcia allowed them to trade Alex Rios and clear the remaining contract years and $26 million he was owed from their payroll. In October, they signed Cuban defector Jose Abreu to a six-year contract to play first base, and while both Adam Dunn and Paul Konerko remain on the roster for now, it's a move that makes sense for the long-term outlook at first. Hahn was also able to make the most of the winter meetings, flipping reliever-turned-starter-turned-reliever-again Hector Santiago for outfielder Adam Eaton, who is a much better center-field solution than last year's option (Alejandro De Aza). Since the Sox missed out on signing a free agent catcher, they took a more measured approach and selected fringe catching prospect Adrian Nieto in the Rule 5 draft; he might not turn out to be any better than the options they already have, but given just how bad their catching production was in 2013 ("among the worst ever" is not putting it too strongly) he was worth taking a flier on. On Monday, Hahn took advantage of another chance to pick the Diamondbacks' pockets and traded closer Addison Reed for Matt Davidson, a 22-year-old who has the potential to be a power hitter and third baseman, or failing that a left fielder if his glove doesn't hold up. Regardless of where the Sox rank next season in the AL Central standings, Hahn deserves credit for his approach. While there's still time for more deals, he's resisted the temptation of expensive veteran free agents. He's ignored the countless phone calls asking for Chris Sale. He's kept the team's projected Opening Day payroll under $90 million which still gives the team some flexibility with which to strengthen the roster. The offensive additions they've made mean that the Sox can at least casually shop their arbitration players (Gordon Beckham, Alejandro De Aza, Dayan Viciedo, and Tyler Flowers), all of whom have been letdowns in past seasons, to teams that might be willing to take a chance on their upside. The amazing part is that all of the roster moves the Sox have made haven't cost them much and all they had to give up talent-wise was a spare reliever/starter in Santiago and their closer, Reed. While their bullpen is a little weaker now, selling high on a closer is absolutely the right move, and the Sox have shown an ability to breed pitchers that has eluded them with position players. This is the first season that Hahn has been in control rather than just lurking in the shadows behind Kenny Williams. While it's too early to know how these players will pan out, I think there's one thing that's clear about Hahn at this point: He gets it.

The lesson, as teams like the Red Sox and Athletics have shown repeatedly, is that if you lose a closer, don't panic, just figure out the next-best alternative and move on. Maybe a kid like Rex Brothers will move into the role. Maybe a veteran like Koji Uehara or even a minor league veteran like Jim Henderson will display unsuspected powers. Yes, at some point your team may go through a season in which you struggle all year long to identify that one guy who can pitch in the ninth inning and never quite get there, blowing lead after lead along the way, but given just how often this particular gambit works out, if the choice is between allocating scarce resources to a reliever and any other department of your team, beef up the rotation or the lineup and worry about the ninth inning later.

The White Sox demonstrated that they understand this principle when they flipped Reed to the Diamondbacks for Davidson. Reed, who will turn 25 at the end of the month, closed at San Diego State University, then moved into the same role for the White Sox less than two years after being taken by them in the third round of the 2010 draft. He throws hard and issues relatively few walks for a pitcher of his power. Reed made it to 40 saves this year, but that's a thoroughly degraded statistic -- there have been 99 such seasons in this century alone, with not only the aforementioned blink-and-you-missed-‘em quartet above recording 40 or more saves in a season, but also Bobby Jenks, Danys Baez, Jose Jimenez, and a bunch of other transients you would need a cheatsheet to name -- but one that in Reed's case conceals eight blown saves. In this era of one-inning "soft" saves, an 83 percent conversion rate is actually quite poor. There were 32 pitchers who had 20 or more save opportunities this year. Reed's save percentage ranked 25th.

That's a pitcher who is (a) replaceable and (b) likely to become disproportionately expensive in the future. While the White Sox might not be able to mint another right-hander whose fastball sits 93-95 mph and also features a killer slider, they can, almost 100 percent guaranteed, chunk out a right-hander who can convert saves at an 83-percent rate.

What they cannot do, and have not been able to do with any consistency since Robin Ventura left town, is find someone to play a quality third base. If you look at the starters, you will note that the last time the same player got the bulk of starts at the position two years running was 2005-2006 with Joe Crede, and that subsequently the team has served the public cold scraps at the hot corner: first-round bust Josh Fields; Crede again; Gordon Beckham in his first major league exposure; Omar Vizquel trying to round out his Hall of Fame case; Brent Morel, truly awe-inspiring at .245/.287/.366; the desiccated remains of Kevin Youkilis; Conor Gillaspie, another first-round bust, though not Chicago's. Moreover, whereas the White Sox' problems at third were once notable enough to become emblematic of the franchise's overall haplessness, the rest of baseball now shares that deficiency with them. There is a serious paucity of quality third basemen in the majors right now, a dearth which helps explains paunchy (though agile) 34-year-old Juan Uribe getting a two-year deal to return to the Dodgers despite hitting .199 over the previous two seasons and frangible Eric Chavez, 36, having his pick of destinations. The team that has a good young third baseman on offer should be able to name its price.

The Diamondbacks had that in Matt Davidson, the 35th-overall pick in the 2009 amateur draft. A career .268/.351/.452 hitter in 591 minor league games, Davidson, 23 as of next March, is a slowish right-handed hitter whose calling card is power and whose main weakness has always been so-so defense. If he doesn't develop at all from where he is now, he could be nothing more than a .250-average/20-home run guy with a subpar glove to boot, but given that White Sox third basemen hit just .236/.285/.350 this year, he doesn't have to be a whole lot more than that. In a major league trial this fall he hit .237/.333/.434 in 87 plate appearances. The White Sox will take that.

The Diamondbacks have had a strange offseason. Thanks to the presence of Martin Prado and Didi Gregorius in the big leagues at the same time Davidson and shortstop Chris Owings completed their minor league studies, Kevin Towers had two commodities that should have netted his team a good return. Instead, having traded one of his pitching prospects and better young outfielders for unidimensional Angels slugger Mark Trumbo, he then used that as an excuse to force the versatile Prado from left field or third base to third base-only. That meant Davidson was now hors de combat, all dressed up with no place to go. Towers turned him into a right-handed reliever, a good one, but as every child making out his Christmas list knows, if that's all you ask for, that's all you'll get.

Brad Ziegler, who handled closing duties for Arizona after Heath Bell's implosion, may not be the quintessential fireballing closer, but those of us old enough to recall the sidearm tossing of Dan Quisenberry or the soap-bubble changeups of Doug Jones can tell you that you don't have to be a thunderbolt-throwing Zeus of the Bullpen to succeed in the ninth inning.

As for the White Sox, as Cee Angi points out in the sidebar at right, Rick Hahn has quietly had a very good winter. We can't know how Davidson's acquisition will play out for them, but we can know this for sure: The White Sox will have another closer to deal before the Diamondbacks have another top third-base prospect to throw away on him. The Diamondbacks have a strong system, so prospects like Jake Lamb and Brandon Drury might make that a close thing, but having a surplus is no excuse to give away rare items lightly. At $11 million per for the next three years, Martin Prado may be paid like a star, but he isn't one, and what was once a surfeit may soon become a poverty. As the old saying goes, a fool and his third baseman are soon parted.

• Neyer: Will Montreal really get a new MLB team?

• Neyer: Should sluggers react to infield shifts by bunting?