Shin-Soo Choo signs with Rangers: How the Texas lineup is affected

Choo brings a unique blend of talents to the table that could help the Rangers in a variety of places in the batting order.

Share All sharing options for: Shin-Soo Choo signs with Rangers: How the Texas lineup is affected

Shin-Soo Choo, Adrian Beltre, Prince Fielder. There is no pitcher in professional baseball that will want to face those three back-to-back-to-back in a batting order. As it turns out, that's exactly what many pitchers may have to deal with in 2014 and beyond. 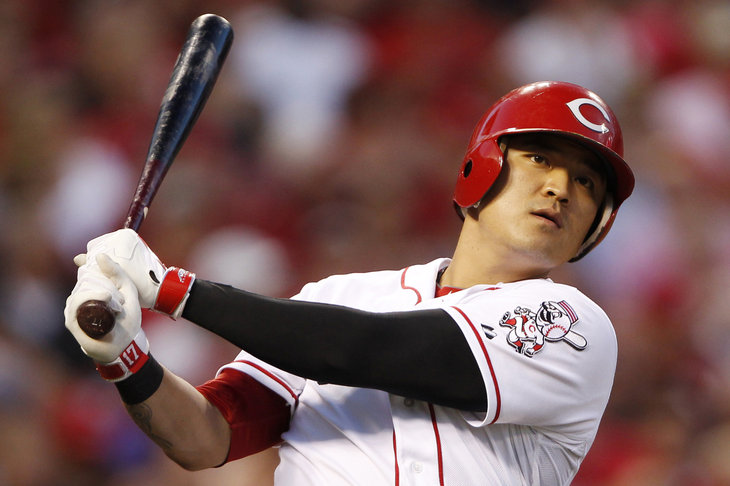 Choo accepted $130 million from the Rangers to take over in the outfield for 2014 and beyond.

The Rangers signed Choo to a seven-year deal worth $130 million Saturday afternoon, bringing in the left fielder to bolster a batting order that already added Fielder earlier in the offseason. The two players will bring a presence to a lineup that the Rangers had made a priority of improving this offseason, even after Texas was second in runs scored in the American League in 2013. The new acquisitions will also necessitate a change to the Rangers' batting order moving forward.

Last year's primary leadoff hitter, Ian Kinsler, was traded away in the Fielder deal, leaving a hole at the top of the order. Presumed center fielder Leonys Martin also spent significant time in the top spot in the lineup while shortstop Elvis Andrus spent most of the year batting second.

Given Choo's outstanding on-base skills, along with very good speed and bat control, he will likely bat first or second in the Texas lineup in 2014, with Andrus taking the other spot. Given Andrus' speed, he may be viewed as a good leadoff hitter, while Choo would be outstanding at moving him to the second spot consistently. Following them in the order will almost certainly be Adrian Beltre and Fielder, who has spent nearly his entire career batting clean-up.

It's also possible the Rangers could prefer Choo as a middle-of-the-order hitter to replace Nelson Cruz, batting either third or fifth. Martin would be the likely option to be bumped to the top of the lineup in that scenario, unless the team believes Jurickson Profar can handle those duties right away. Fielder would stay in the No. 4 spot, with Beltre hitting in whichever spot Choo leaves vacant. For now, however, the likely Rangers batting order seems to be:

That's a lineup that could wreak a lot of havoc on opposing pitchers. They are obviously all very talented hitters, but more than that they are hitters who are capable of making pitchers work. Next years Rangers team figures to be very patient, forcing a lot of pitches and getting opposing starters out of the game early. It could also see several permutations to keep things fresh as several players would likely be comfortable in multiple positions in the order.

With a strong starting rotation, a shut-down bullpen, and now a lineup that has acquired both a spark at the top of the order and a big bopper for the middle, the Rangers may very well be favored to win an AL West division crown. Don't pencil them in for the division title yet, though; Texas will see plenty of competition from the reigning champion Oakland Athletics and the rebuilding but tough Seattle Mariners, and the Los Angeles Angels of Anaheim have too much talent to be completely dismissed.

• Indians shift C Santana to 3B

• Predicting the next time the Yankees will be awful