It's not Moneyball, but then neither was Moneyball.

For the last two seasons, the A's and Rangers have gone head to head for the AL West title, the Rangers coming in second both years. For that reason it seems odd that the two teams would be collaborating on deals that might help the other out, but that's what happened on Tuesday afternoon when a deal sending prospects Michael Choice (outfield) and Chris Bostick (second base) from the A's to the Rangers in return for outfielder Craig Gentry and pitcher Josh Lindblom was consummated.

This is at first glance an odd little trade, one in which the A's would seem to have given up the most value right off the bat. Choice may be a bit of a tweener, a guy who can't quite play center while not quite producing enough with the bat to excel in a corner, but the A's, with Josh Reddick's struggles, Yoenis Cespedes's eagerness to give away at-bats, and the combination of Coco Crisp heading into his the last year of his contract and the near certainty that he won't repeat what was a career year at 33, the A's can't afford to scoff at that kind of player. Bostick, far from the majors after spending the year at Class-A Beloit in the Midwest League, had a strong year at age 20, hitting .282/.354/.452. It's not guaranteed that he can maintain that kind of pop as he climbs up the ladder, but for now he gives the Rangers another promising middle infielder to go with Jurickson Profar and Rougned Odor, among others.

In the short term, Choice will slot into the left field spot the Rangers had more or less vacant throughout 2013 due to the sudden death of the now-departed David Murphy's bat. His upside would seem to be something like Murphy's average year, .275/.337/.441.

In exchange, the Rangers surrender a player who has been a very useful spare part for them over the last few years in Gentry, a speedy slap hitter who is an above-average defender. He added patience to his portfolio in 2013, just about doubling his walk rate from the year before. A career .280/.355/.366 hitter, he's also stolen 56 bases against just 10 caught stealing. He's been extensively platooned, and what little power he has vanishes against same-side pitchers. Still, Gentry is the picture-book example of a valuable fourth outfielder, one who WAR suggests was worth between 3.0 and 4.0 wins the last two years despite limited playing time.

As good as Gentry is, he can be overvalued. I was writing this piece there were some frankly nonsensical responses to the deal from apparent Rangers fans who don't seem to understand that trading a 30-year-old, arbitration-eligible reserve, no matter how useful or popular, for two solid prospects, one of whom will be ready to contribute as soon as spring training, is a great move regardless of what happens next. Jon Daniels dealt a limited player whose utility-to-dollar ratio was about to suffer a rapid decline for a player with everyday potential as well as a low-minors lottery ticket. That's exactly what a GM is supposed to do.

Lindblom had a good year or so in the Dodgers pen beginning in 2011, but he was dealt twice (as part of the price of Shane Victorino and then for Michael Young) and somewhere in there his command got left in the back of a cab (hey, it happened to Ernest Hemingway and things worked out for him, at least for awhile). Lindblom will be 27 next year, and while he might recover his value with stability and a new set of coaches working him over, right now he has to be viewed as just another back-of-bullpen righty, a figure only slightly less fungible than those hot dog wrappers you see fluttering down from the upper deck in the late innings of windy games. The subsequent acquisition of Padres right-hander Luke Gregerson, apparently in exchange for platoon outfielder/designated hitter Seth Smith, further underscores Lindblom's status as a throw-in.

Is it worth giving up two very solid prospects to get a part-time outfielder and a pitcher who is just a guy? The answer depends on context. This is the same key to the question the Riddler asked Batman just yesterday, "When is $10 million for a closer considered quite a bargain, even for a small-market team?" And Batman, being well-versed in situational reasoning, replied, "When it's the last piece in the pennant puzzle," and promptly socked the Riddler on the jaw. 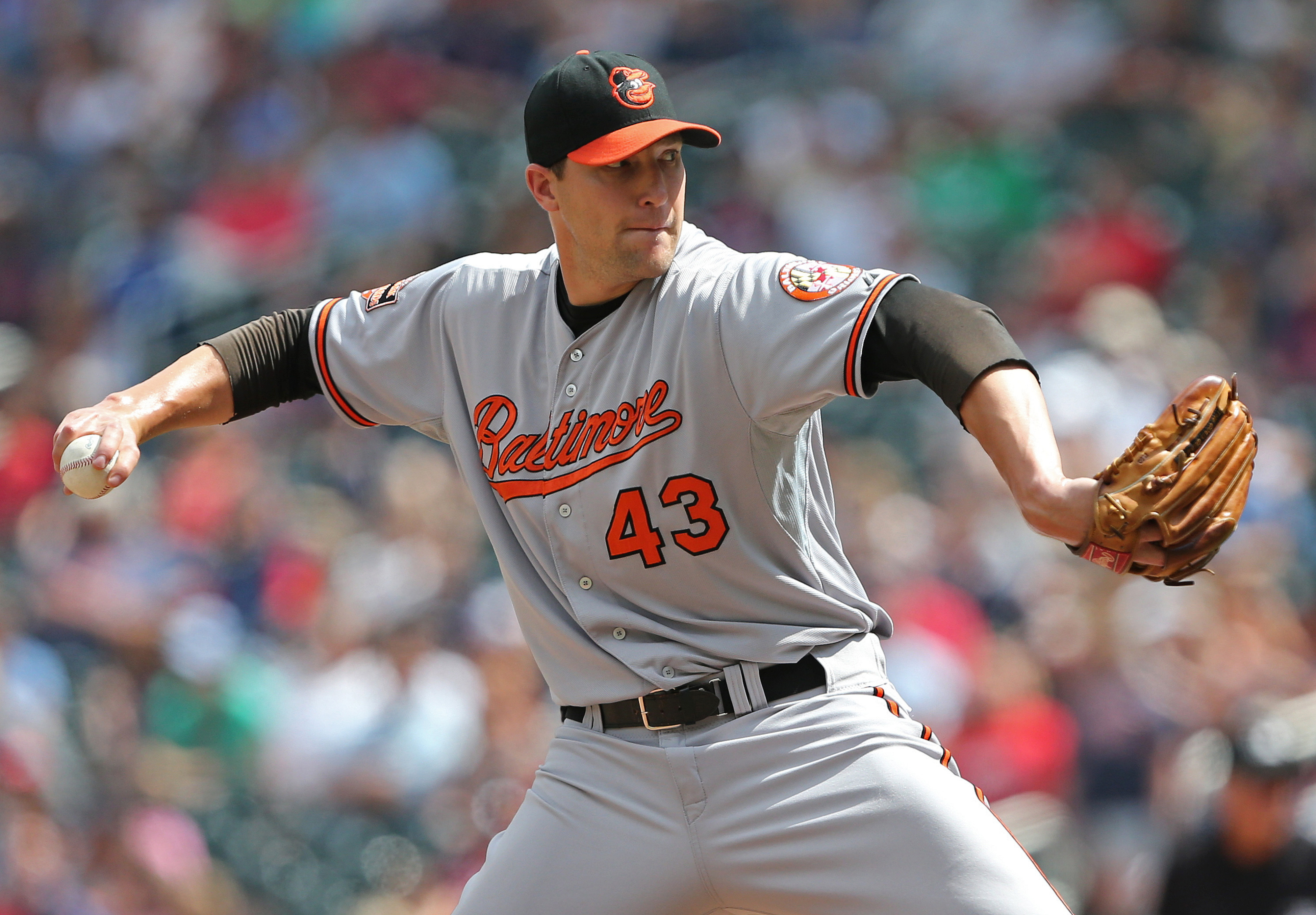 The A's have won 94 and 96 games the last two years. In both seasons they dropped the fifth game of the League Division Series. They are this close to the World Series, but you can define "this" a lot of different ways. It could be something as simple as luck or as hard to acquire as another top starting pitcher or as uncontrollable as consistency from the players they have with the notable exception of a return to 30-plus home runs by Reddick. But being this close, it's clear that they should not let the three free-agents they have lost or will lose, that platoon outfielder (Young), their 40-year-old top starter (Bartolo Colon), and their closer (Grant Balfour), stop them. In acquiring Gentry, Scott Kazmir and Jim Johnson, they have made a strong effort to replace those players on a one-for-one basis.

Yes, the normally parsimonious A's have added more money -- we won't know exactly how much until they settle up with the arbitration-eligible Johnson -- than came off the books (about $15 million), but spending more makes sense if those dollars have outsized value because they are going to push you to another division title or even a championship. In other words, if the Astros were to end the offseason with (say) $15 million more in commitments than they had this year it probably wouldn't make very much difference to their place in the standings, their attendance, their TV ratings, anything. If the A's end up that way, it very well may bring them $20 million or more in revenue if they make the postseason and clear the first round. That's a gamble, but a sensible one, especially when you consider that a new national television deal kicks in next year, giving teams even more Monopoly money to play with.

We've now had over 10 years of unimaginative finger-pointing every time Billy Beane makes a deal that doesn't seem to gibe with the low-cost/high-smarts ethos of Moneyball. The usual cranks came out when he swapped for Johnson, even though the A's gave up only a defensively-challenged second baseman who didn't figure in their plans and a player to be named later who likely is not Superman. The correct response to such cavils is to point out that:

1.       Billy Beane did not write Moneyball, nor is he bound by the precepts that it advanced.

2.       Moneyball was not about adherence to any one philosophy. In fact, it was about the rejection of an antiquated approach if one more suitable to the circumstances could be found.

3.       Even if the foregoing were not true, Beane is allowed to learn something new in 10 years.

4.       Spending a little extra to get a lot more is what is generally termed an investment. If the A's have it, and everyone has it right now, there's no reason Beane shouldn't use it.

5.       Someone should hurry up and write another book about a successful front office already so they can enjoy having misinformed, reductionist thinking applied to them.

Again, there is no knowing if these moves will work out. Kazmir's comeback could prove to be transient, Johnson's grounders could take a few too many bad hops, Gentry might lose that added patience and be nothing more than a pinch-runner/defensive replacement while Choice flourishes in Texas. Still, there is a method in this. One of Zeno's paradoxes states that in crossing any distance you must first get halfway to your endpoint, but to arrive at that midpoint you must first cross half that distance, and then half of that, and so you can never actually arrive where you're going. What Beane is attempting to do is pull the A's across the distance from a first-round loser to a champion by maintaining and improving the club by those same infinitesimal, possible futile increments.