The Seattle Mariners have reached deep into their coffers and signed free-agent second baseman Robinson Cano to a 10-year, $240 million contract, reports Enrique Rojas of ESPN Deportes, taking him away from the New York Yankees, the organization that signed him as an amateur free agent in 2001.

More Mariners: Trading for Price could be a mistake

The deal absolutely shatters the previous high for a contract given to a second baseman, more than doubling the amount ($110 million) Dustin Pedroia received from his eight-year extension with the Red Sox back in July.

The Mariners emerged as "major players" for Cano earlier in the week and were quick to show a willingness to outbid the Yankees for the second baseman's services. New York's last known offer to Cano was a seven-year, $160-million deal, which the M's surpassed in spades.

Seattle was initially hesitant to go over the $200-million threshold, but with Cano's asking price sitting at 10 years and $240 million, the club made the move. General manager Jack Zduriencik told Bob Dutton of the Tacoma News Tribune on Wednesday that the time had come to "augment" the club, which he's certainly accomplished.

At 31, Cano is past what the traditional aging curve would consider his prime, but his ability to stay off the disabled list -- he's played in at least 159 games each of the last seven seasons -- should quell some of the fears that he's going to start falling apart right away. 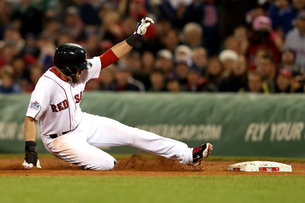 The Dominican infielder was never a top prospect as he made his way up the minor-league ladder, but has established himself as one of the game's premier players over the last decade. Cano hit .314/.383/.516 with 27 home runs in 160 games for the Yankees in 2013, earning his fourth consecutive top-six finish in the AL MVP voting.

Cano's addition to the heart of the Mariners' lineup provides them with power they've been lacking for years, but it also creates some clutter at second base. Seattle has youngster Nick Franklin and Dustin Ackley on the roster at second already, so one of them could become expendable now that Cano is around for the next decade.

The Mariners had just $32 million in pre-arbitration payroll tied up for 2014 and are about to embark on TV deal that will net them $2 billion over the next 17 seasons, so the deal -- as big as it is -- shouldn't hamstring the organization too much. In fact, Cano's deal might be just the start of a bigger offseason plan. Seattle has been linked to Rays left-hander David Price this week, and there's been some indication they might be willing to give up top pitching prospect Taijuan Walker in order to make that happen.

With Cano off the market, the Yankees must now look elsewhere to solve their problems at the keystone. New York did sign infielder Kelly Johnson to a one-year, $3 million deal late on Wednesday, so perhaps Brian Cashman and company knew that the writing was on the wall with Cano.

• Why asking "Is he a first-ballot Hall of Famer?" is the wrong question