The World Baseball Classic might not be what everyone wants, but in some ways, that's just fine

Share All sharing options for: Learning to love the World Baseball Classic

I've really come to like the World Baseball Classic. The games can be a lot of fun, and so can the crowds, particularly in countries that aren't this one. Mostly, it's just baseball that matters at least a little bit more than your average Spring Training contest, at a time when there hasn't been any baseball that's mattered at all for months.

One can get into trouble if one looks at it any more deeply than that. It's just a bit of fun near the end of a baseball-starved half-year; it's not a moratorium on international baseball dominance. Big-league players tend to view it as a different sort of Spring Training, a time to get into form after a long winter, while other players around the world are at their seasons' ends or middles. American born-and-raised Cy Young Award winners from the prior year have skipped each WBC: Chris Carpenter in 2006, Cliff Lee in 2009, David Price this year. NL MVP Buster Posey is sitting this one out, as is 2011 AL MVP and Cy Young winner Justin Verlander. Italy's roster has boasted such full-blooded Americans as Mike Piazza, Nick Punto, Drew Butera and Jason Grilli. The game's best player, Albert Pujols, hasn't made an appearance since the first event in 2006, while Willie Bloomquist, whose 11-year major league career has been worth less than a win above replacement, is one of 28 men representing the nation purporting to be the sport's birthplace. It's fun to watch, fun to root, fun to follow along. It absolutely cannot be taken as a serious test of, well, anything.

But it sure can be fun, and the most fun parts, to me, are those frequent "oh, it's that guy" moments: you spot a guy in-game or on various WBC rosters (not the American one, unless you count Bloomquist) who you used to know and care about, but who has been forgotten in this country -- and typically with good reason. It turns out this guy has had a rich, interesting baseball life for years, just well, well beyond the limits of your consciousness, and now suddenly he's on a (somewhat) big, international stage.

My favorite That Guy this year was Mexican corner outfielder Karim Garcia. Garcia was in the big leagues (albeit for a cup of coffee) at age 19 in 1995, and made Baseball America's top 100 prospects list four times, peaking at seven in 1996, just behind Derek Jeter and two spots ahead of Vladimir Guerrero. He never put it together at the big-league level, though, amassing 1,561 plate appearances and a .241/.279/.424 line and 82 OPS+ while playing for seven different teams, his final game coming in 2004 at age 28. 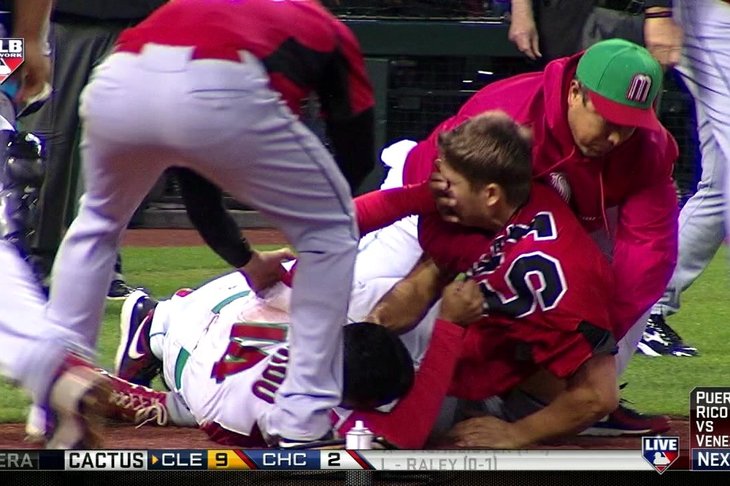 Garcia's post-prospect days have been vibrant and eventful, just not on the big stage. He hit 28 home runs in Triple-A ball way back in 2000, and 31 in 2001. After his final major league stint, Garcia played in Mexico, Japan, Korea, and back in Mexico. He hit 29 home runs in Korea in 2009, and batted .334/.383/.584 for Mexico in 2012. Now 37, Garcia is the starting right fielder for Mexico. He went just 2-for-10 with a double, and Mexico was eliminated in the first round after losing to Canada on Saturday, but the reason the WBC exists, to me, is the opportunity to see a former top prospect like Garcia trot out there nearly two decades later and, well, to remember who he was.

It's harder to find those guys on the teams advancing to the semifinal round. There's Pedro Valdes on Puerto Rico, an infielder who will turn 40 this summer and played a total of 53 games for the Cubs and Rangers from 1996 to 2000; he'd played mostly in Mexico since 2001, but is credited with only ten games in 2011 and none in 2012. There's Lorenzo Barcelo, who pitched 66 innings in the bigs between 2000 and 2002 and has spent his last three seasons in the Mexican league and is serving as a middle reliever for the Dominican Republic. But the vast majority of those two rosters is made up of current major- or affiliated minor-league players. You know about Team USA, and the Japanese team, of course, has no big-league ties thanks to the difficulties inherent in crossing over to here from there. I imagine keeping an eye on Valdes or Barcelo will be fun if you have a memory of them as big leaguers (I don't).

Sadly, there won't be anything this year like my favorite That Guy moment of all time, which was seeing Gene Kingsale playing a key role on the surprising Netherlands team. Kingsale was a solid outfielder for the Triple-A Tacoma Rainiers team I frequented in 2001 and 2002, and managed about 600 plate appearances for four different MLB teams from 1996 to 2003; now 36, he retired from the Dutch Honkbal Hoofdklasse after the 2011 season, and wasn't a part of this year's Netherlands effort.

But that's just the kind of thing that can and does happen, and the potential for another Kingsale moment is exactly why it's a positive that some of the current superstars in the game continue to sit the WBC out. It's also exactly why I'll continue happily following along, America's best and brightest stars or no.

• Aroldis Chapman, the Reds and learning from recent history

• Chris Sale and the timing of a pitchers's first big contract

• David Ortiz and his possible replacements