Gomez might not seem like someone to extend, but in recent years, he's been a valuable piece of the Brewers

The Brewers announced a surprise extension on Wednesday, inking center fielder Carlos Gomez to what amounts to a four-year deal for $28.3 million. Gomez was already under contract for 2013, his final season before free agency, so three years were added on at what is a more than reasonable cost for each. Still, though, it kind of came out of nowhere.

Leaving aside that Scott Boras is his agent, and therefore the default assumption is that it's free agency pay day or bust, Gomez just doesn't seem like the kind of player that a team should bother to extend. That's just on the surface, however, as much of the reason for that belief is in his past. Gomez has been in the majors since he was all of 21 years old, and has bounced back-and-forth between playing full-time and wasting away his days on the bench. Something like that -- being rushed to the majors, and not allowed to develop on a normal path -- can derail a career. The fact Gomez has bounced back to the point where he hit .260/.305/.463 -- good for a slightly better-than-average 102 OPS+ -- is a testament to his ability. But, in a sentence most people who had seen Gomez in the mid-aughts never believed they would see, it's mostly a testament to his power.

From 2007 through 2010, Gomez amassed 1,420 plate appearances and hit just 17 homers. His Isolated Power (subtract batting average from slugging percentage) came in at all of .103 at this time, which would have been fine for a glove-first center fielder if he had some semblance of patience or consistent contact abilities, but Gomez had neither: he owned a career .246/.293/.349 line.

However, at the start of this stretch, Gomez was all of 21, and still just 24 at its conclusion. Just to give you some context, the average age of a player in the Double-A Eastern League in 2012 was 24. Sure, there are plenty of older non-prospects there (or at any level), but chances are very good that Gomez would have performed in a far more aesthetically pleasing manner had he been among his peers, on a normal developmental curve. Instead, after hitting well at both Double- and Triple-A in 2006 and 2007, respectively, Gomez was essentially stuck in the majors with first the Mets and then the Twins, over matched in daily lessons from major-league pitchers.

The Mets initially rushed Gomez to the majors after he hit well -- but didn't dominate -- the high minors, but could have easily stuck him back a level after a poor 2007 had they not traded him. Instead, the Twins got a hold of him, and gave him 614 plate appearances in the bigs, never once giving him a minor-league at-bat despite the obviousness of his unfinished state. They cut into his playing time in 2008, playing him in 137 games but giving him just 349 plate appearances, rather than simply sending him down to refine his game at the still acceptable age of 23. 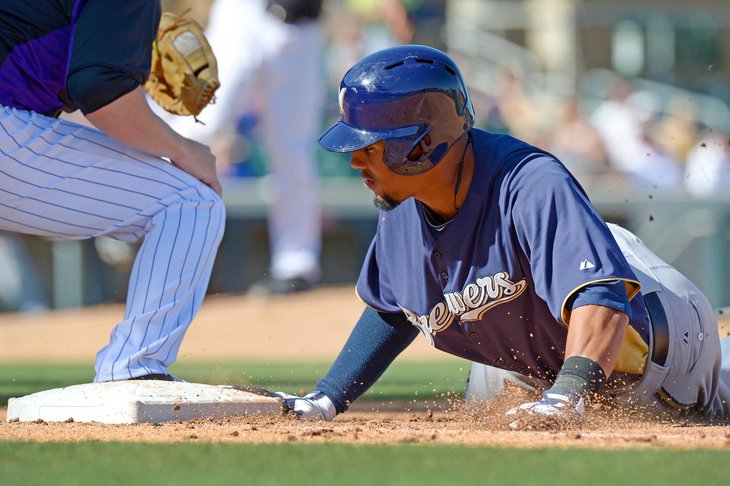 That was it for Gomez in Minnesota, as he was sent packing to the Brewers for J.J. Hardy. The Brewers also didn't bother with Gomez in the minors, though, and played him part-time for two years. However, in year two, the 25-year-old Gomez finally started to show signs of life at the plate. He only hit .225 (and with an abysmal .276 on-base percentage), but he started to hit for power. He set a new career-high for homers with eight despite just 258 plate appearances, had 22 extra-base hits overall, and supplemented that with 16 steals in 18 attempts and positive baserunning value overall. The .178 ISO wasn't ridiculous, but it was a huge jump from Gomez's career averages to that point. In 2012, he would turn it from a one-year occurrence into the start of a potential trend.

Gomez hit .260/.305/.463 last season, setting another career-high in homers (19), extra-base hits (42), ISO (.203), and, to top it off, steals and baserunning runs as well. He had his faults, as you could surely pick out by looking at his on-base percentage, but combine the power, baserunning, and his well above-average defensive ability in center together, and you have yourself a player that can be expected to produce at at least an average level in the majors. That might not seem like much, but remember what Gomez looked like just a few years back: the change in value is significant, as he now actually looks like a capable major-league outfielder.

Gomez's power seems legitimate enough, too. The average distance of his homers increased to over 400 feet, according to Hit Tracker, and thanks to his improved bat speed, the ball flew off of the bat at a career-best velocity as well. While Miller Park is certainly homer friendly, just a few of his 19 bombs would have exited fewer than two-thirds of the league's stadiums. It took awhile, but Gomez can hit the ball far when he manages to make contact.

So, the Brewers found themselves with a center fielder who can run the bases in a productive way, who can handle center field more than adequately defensively, and who just might be an average hitter at the plate now thanks to power that took awhile to develop, but seems to be real. They bought out his first three years of free agency -- his age-28, 29, and 30 seasons -- and only spent $24 million to do so. Had he produced another campaign like his 2012, there is a chance Gomez could have signed somewhere else as a free agent for more. He might only be B.J. Upton lite, but the real Upton pulled in five years and $75 million from a club not known for spending.

Locking up a capable player to a reasonable contract for four years through what should be his prime seasons is an easy decision to make. There is risk that Gomez's power takes a step back, or that his defense slips just enough, but at the price the Brewers are paying, this deal is more than worth those potential pitfalls.

• The 5 most important players in the AL East

• Who's the best player in baseball?

• Should we be worried about Tim Lincecum, again?