Strasburg equates being a top pitcher with high pitch counts. His attitude is admirable but his priorities may ultimately be self-defeating.

Stephen Strasburg is frustrated again, and I can't say that I blame him. Strasburg is supposed to be one of the greatest pitchers of his era. That's not just hyperbole -- there was a reason that Strasburg was the first overall pick in the 2009 draft and one of the most hyped amateur players since Alex Rodriguez. That he could already hit the high-90s, throw a nasty slider, and use pinpoint command to strike out batters on either side of the plate in college meant that he was going to save the Nationals; he was going to be their ace.

Largely, that's what has happened, but it was supposed to happen differently. He certainly wasn't supposed to spend a full season sidelined by Tommy John surgery, and more importantly, when he returned, he wasn't supposed to be babied and caged as though his arm could fly off of his body at any given moment. While no one can fault the Nationals for wanting to protect their investment, it's easy to see how Strasburg could feel cramped by the limitations he's had to put up with to this point in his career.

Now, finally, the Nationals are willing to let the training wheels come off, even if it means that Davey Johnson and Mike Rizzo will be holding onto the back of the seat for the first few laps while Strasburg pedals to make sure he's stable. While everyone seems ready to put the surgery and recovery behind them, Strasburg is pushing an agenda of his own: He's the ace, and he wants higher pitch counts to prove it. Strasburg told Adam Kilgore of the Washington Post, "You look at some of the top pitchers in the game, they go at least 110 every time out. I'm going to be prepared for it... just got to keep working, keep grinding."

While there's value in being prepared, Strasburg's reality of what other pitchers are doing is a bit exaggerated. There are certainly some pitchers who have the green light to throw more pitches than the average, but there simply are not many pitchers that are throwing 110 pitches per outing. Planning for a more arduous workload is a valid desire for any pitcher, but aspiring to be Justin Verlander, who has averaged 114 pitches per game in the past three seasons, not only seems unrealistic, it seems unnecessarily risky for an ace and a team working to protect its greatest asset.

Only one pitcher, Verlander, has averaged more than 105 pitches per start in each of the last five seasons. After seven full seasons in the majors with no real signs of fatigue or injury, and it's time to accept him for what he really is: A mutant pitching alien that landed in Jim Leyland's backyard one night while he was smoking a Marlboro Red on the patio. The only two human life forms to come close to Verlander's pitch counts were C.C. Sabathia and Roy Halladay, who averaged 110 pitches per outing in four of the last five seasons, but given Halladay's rocky spring and Sabathia's recovery from surgery to remove bone spurs from his pitching elbow, they may not come close to those pitch counts this season.

There's a lot of turnover in that list, no surprise given that heavy workloads equal problems for pitchers. That's not to conflate all injuries with excessive use; pitchers get injured for a variety of reasons, but high pitch counts can speed up the aging process and exhaust the finite number of innings a body can endure. In 2012, the league as a whole trended away from high pitch counts for pitchers, with only nine pitchers averaging more than 105 pitches per game. While in every generation, there are a few who can carry the added workload with ease-a Clemens here, a Verlander there-mostly pitchers can't do it year after year. Of the 32 pitchers above, some have shown fatigue well-beyond their years, others have had Tommy John surgery, and some have underperformed. Some have sailed through as well, but the mix of outcomes is at the least concerning.

The real question, then, is how one values innings now versus future innings. It's understandable that Strasburg wants to go deep into outings with high pitch counts, something he has yet to do in his tenure. With the team restrictions in place, Strasburg averaged 5.2 innings per start last year, considerably less than what pitchers like Verlander, Cole Hamels, Clayton Kershaw, Cliff Lee, and Felix Hernandez did, but he still brought value: Strasburg was the best starting pitcher in the majors as ranked by Fair Run Average last season (3.17). The National League average for starting pitchers was six innings per start; quick math says that if Strasburg makes 34 starts this year under the same conditions, he would pitch around 204 innings, considerably more than the 159.1 he threw last year. To reach Verlander's average, he'd pitch roughly 239 innings, or 80 more than he did last year, a tremendous jump. Now factor in the extra pitches that Strasburg would throw given that he's a strikeout pitcher and not pitching to contact, and deciding whether the risk is worth the reward becomes more difficult. 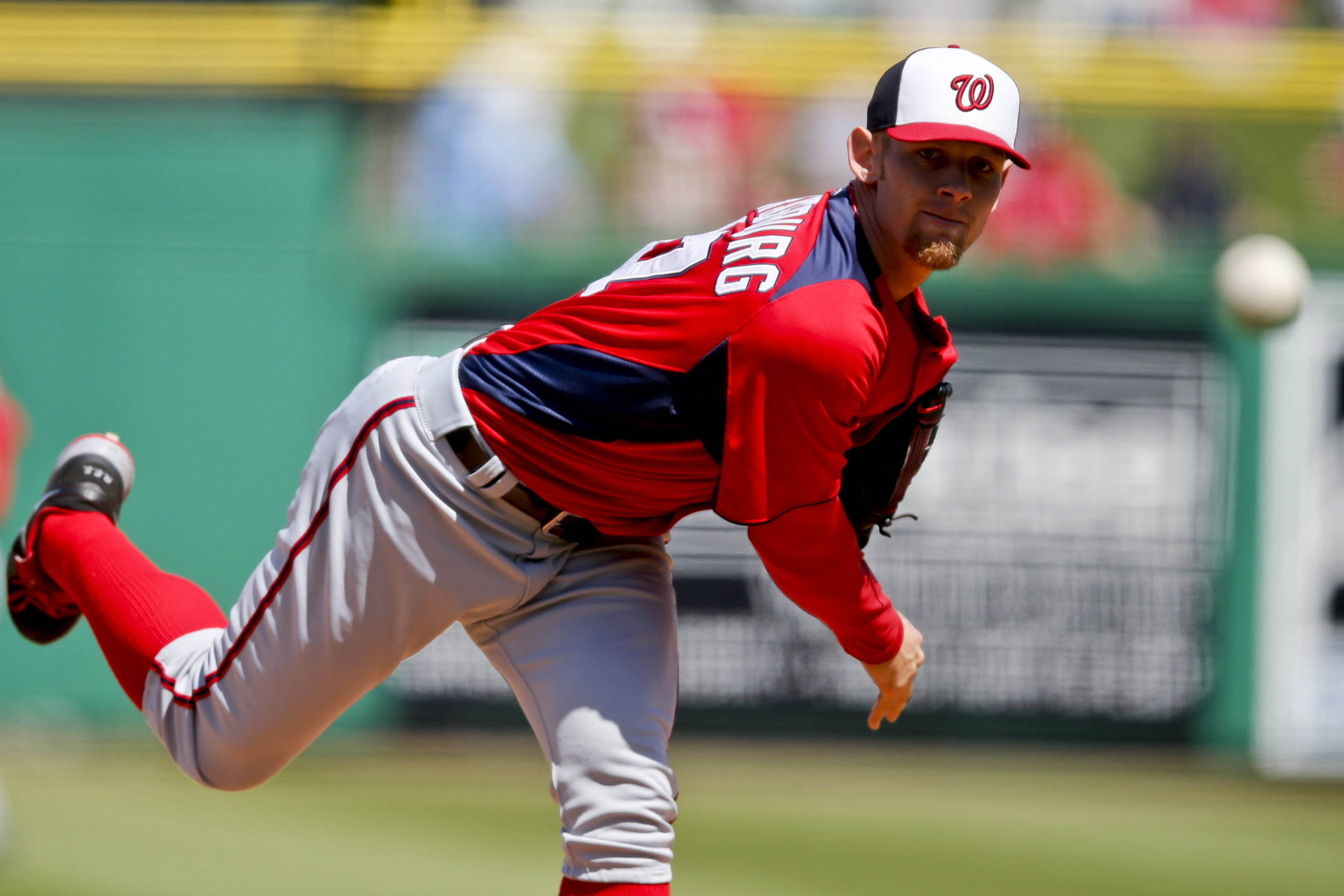 In some circumstances, like those that apply to Verlander and the Tigers, the extra workload does make sense, or is at least defensible. Verlander has an established track record of insane pitch counts, and with the weak bullpen last year, a tired Verlander was better than a partially rested Phil Coke or a fully-rested Jose Valverde. Conversely, the Nationals' deep bullpen is projected to be one of the best in the majors next season, and is more than capable of absorbing an extra 40 or 50 innings over the course of the season, especially when distributed over seven or more pitchers, without losing too much in quality.

Still, it's easy to see where Strasburg is coming from. It's commendable that he's willing to put in the effort and assume a leadership role, and perhaps being prepared to throw 110 pitches per outing makes him more physically prepared to hit the 100 pitch-mark regularly, but wanting to throw more pitches for the sake of proving one belongs in a particular peer group doesn't seem wise. Strasburg's instinct is understandable given that he's spent the bulk of his short major-league career being micromanaged, but higher pitch counts for their own sake aren't a sign of freedom, but an unnecessary risk given how effective he's been, even when leashed.

Strasburg already has one surgery under his belt and has missed almost a full season because of it. He came back in good shape and reasserted his dominance as one of the best pitchers in the majors, but the next one may not be so kind. Halladay might have had his last good season two years ago at 34. Tim Lincecum is just 29, and though he's avoided a major injury so far, he stumbled last season. It would be a shame to sacrifice five years at the end of Strasburg's career for an extra 30 innings a year that could easily be absorbed by the bullpen.

Instead of looking at the best pitchers as workhorses, Strasburg might cultivate a different analogy, and think of pitchers as racehorses with limited number of heats in them. A hundred years ago, Christy Mathewson counseled pitchers to save their stuff for "the pinch," when the game was tight. That advice no longer applies due to the advent of relief pitching, but perhaps it still applies to careers -- a few pitches saved today may mean dozens of additional starts in the years to come. Strasburg's focus should be on remaining healthy, finishing his first full major league season, and being available and rested for the playoffs, should that be in the cards. Give some of those incremental innings to Drew Storen and Craig Stammen, Stephen: You're already an ace, there's no need to be a martyr.

• What happened to all of the good first basemen?

• Matt Garza sidelined until May

• The World Baseball Classic and the apathy myth