In the first of a series of previews, we look ahead to possible hitting highlights.

Share All sharing options for: 2013 MLB Season Preview: The Year in Offense

After an incredibly volatile two decades or so, American League team offensive levels have been stable at about 4.45 runs per game over the last three years, the same level as the 1980s (ignoring 1987) through the very early 1990s. That unusual consistency is unlikely to repeat itself in 2013. However, that doesn't mean we're about to return to the inflated levels of the post-strike years. We're unlikely to see a 50-home-run hitter (there's been just one of those in the last five years, and only four others who topped 40), or 140 RBI (none of those since 2007). If you're only into records and big round numbers, move long -- nothing to see here.

That's not to say that there won't be compelling developments on offense during the 2013 season. Here are four things to look for:

When they signed Albert Pujols a bit over a year ago, the Angels were supposed to be the team to beat. Indeed, they were very, very good, especially offensively, finishing third in the league in runs and first in OPS+. Having finished four games short of the playoffs in spite of their obvious prowess, and they brought in Josh Hamilton, and now they're really supposed to be the team to beat.

Are they, though? Hamilton, who put up a 139 OPS+ in 148 games in 2012, replaces Torii Hunter, who managed a 132 in 140 games. Hamilton is more likely to repeat his 2012 output in 2013 than Hunter is his, but he's not likely to significantly outdo Hunter's 2012, and he's not likely to play 148 games again (he'd done it only once before). The Angels might experience drop-offs in other areas as well: I can't wait to see what Mike Trout does for an encore, but one has to admit it's not likely to top 2012's MVP-level debut. Mark Trumbo, taking over as the full-time designated hitter from Kendrys Morales, hit just .208/.250/.302 from August 1 through season's end. Much of the rest of the lineup consists of question marks, injury risks, and uninspiring known quantities. Pujols had a very poor April and September and has looked ancient this spring. The Angels could be brilliant at the plate this season, but they could also very much not be.

The all-time leader in career batting average on balls in play, per FanGraphs, is Tom McCreery, who hit .390 on balls in play from 1895 to 1903. Behind him are Ty Cobb and Wee Willie Keeler, then someone named Tuck Turner. Austin Jackson, at .370, currently sits at fifth all-time. He's behind four players, the last of whom retired in 1928. If you look at the leaderboard from 1950 to date, Jackson is first by 11 points over Joey Votto. There are nine players within 11 points of Votto, so Jackson is first by a ton. There is no doubt that when AJax makes contact, he tends to hit it hard and on a line, but is he that much better at hitting it where they ain't than the entire rest of modern baseball history? Jackson has cut down on his strikeouts, but if he's going to be anywhere near as good as he was in 2012 (.300/.377/.479, 130 OPS+), he'll have to continue to avoid hitting into outs at a rate we haven't seen since fielding gloves started extending substantially beyond the fingertips.

Jack Zduriencik began his stint as Seattle's general manager prioritizing defense more than anyone we'd ever seen. Four years later, the Mariners have finished last in runs per game four years in a row, a case of offensive anemia that is only partly attributable to their cavernous home park. There's a serious danger that they overcorrected for 2013, bringing in a cluster of players whose primary position should probably be designated hitter -- Michael Morse, Kendrys Morales, Jason Bay, and Raul Ibanez. They're likely to have the worst defensive team of the Jack Z era, but will it be the first not-last-place offensive team? Well, yes, probably, if only because the Astros are an AL team now. Morse and Morales can hit a bit, of course, but it's hard to imagine these moves making the Mariners a substantially better-hitting team than they were a year ago.

Dunn has always been the king of the three true outcomes, but became a caricature of himself in 2012, leading the league in walks and strikeouts and missing the home run lead by three. He also batted just .204. It feels like he's teetering on a precipice, like there's only so much farther in one direction a guy can go before he stops being a useful hitter altogether. On the other hand, per FanGraphs, Dunn's line drive rate was its highest since 2006 and his fly ball rate was the lowest it's ever been. That would seem to suggest he's in for a better year, thanks to a better batting average, in 2013, even with his already-high-and-growing strikeout rate. -- Bill Parker 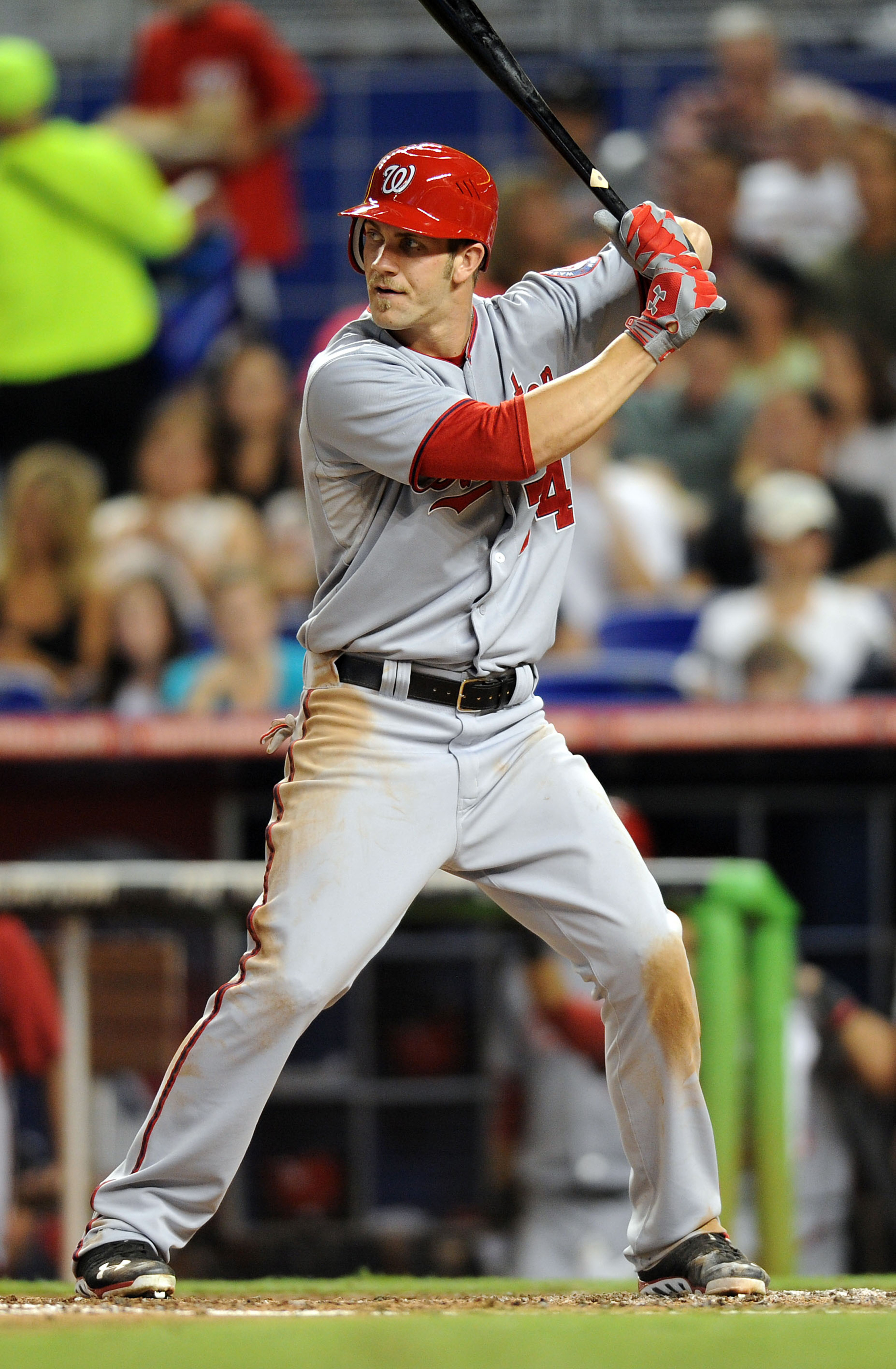 It was something of a drab year for offense in the National League, with only MVP Buster Posey having, by the standards of his position, a season for the ages. On the team level, the Brewers led the circuit with 776 runs, which stands as the 59th-highest runs total of this century. As Bill said in the American League section above, offensive levels are lower now, and we have to adjust our expectations for player-seasons accordingly. Still, just because we no longer are living through an era in which runs rapidly tot up like the scoreboard on a pinball machine, that doesn't mean there aren't accomplishments to which we can look forward:

Only one NL player, Ryan Braun, made it to 40 home runs last year. Giancarlo Stanton, the last Marlin left standing after yet another Miami purge, probably would have made it as well had he not missed almost 40 games to knee surgery and an oblique strain. With one of the worst lineups in baseball supporting him -- is Placido Polanco really going to be the cleanup hitter? -- he might receive a Bonds-like number of intentional walks, but if he gets his swings in we should see him establish himself as the NL's preeminent pure power hitter. Former MVP Joey Votto lost 51 games to knee surgery, despite which he still finished tied for second in the league with 44 doubles. He hit a two-bagger every 8.5 at-bats; 600 at-bats would have meant a record-shattering 71 doubles. Matt Kemp was hitting .359/.446/.726 when a mid-May thigh injury derailed him. He wasn't the same player upon returning, hitting .280/.331/.461 the rest of the way. Denard Span, acquired by the Nationals from the Twins, will be a big part of defending his new team's division title, but he hasn't played a full season in two years due to a concussion and shoulder problems. Then there's Troy Tulowitzki, who all but disappeared last season after three straight top-10 finishes in the MVP voting. At 28 he's in the center of his prime as the NL's best all-around shortstop -- if he can stay on the field.

A Full Year of Bryce Harper

The service-time shenanigans are over. Harper had one of the best seasons by a teenager in history. Now we get to see what he can do as a 20-year-old, one who is in the majors from Opening Day on. Quoting projections is somewhat useless given Harper's precociousness -- he could be the same as last year, improve incrementally, or take a huge, galumphing leap forward.

There is no Harper 2013, a rookie who is going to be an instant sensation, but there are still several promising youngsters to look forward to. Cardinals outfielder Oscar Tavaras, probably the best pure hitting prospect in the game, is nearly ready, but there's no room for him on the Cardinals' crowded roster. He awaits the inevitable injury. Young Cuban Yasiel Puig has hit over .500 in spring training and, if Carl Crawford is not ready to start the season, could theoretically break camp with the team. Since he hasn't yet played above High-A, we might have to wait another year or two to see him really make a splash. Third baseman Nolan Arenado of the Rockies looks like he'll be hard-pressed to put up a decent on-base percentage, but this is a team that has been looking for a franchise third baseman since Vinny Castillia left town; Arenado is their best hope since Ian Stewart. Human comet Billy Hamilton should make his debut with the Reds at some point this year, and his base-stealing attempts will become nightly highlight-film material. Adam Eaton is going to need to get over an elbow injury before he suits up for the Diamondbacks, but once he does the club will have a much-needed OBP threat at the top of the order. Padres second baseman Jedd Gyorko could be a Jeff Kent-style offensive threat.

The best young outfield in baseball and a mirror image of what the division-rival Mets are offering. It feels like Heyward has been around forever, and after an injury-disrupted sophomore slump in 2011, no doubt a few fans wrote him off. He came roaring back last year, and at 23 is still coming into his prime. Both Upton brothers have something to prove -- Justin was publicly condemned by his former organization and had a disappointing season complicated by a thumb injury, while B.J. had an odd year, setting a career high on home runs, but failing to get his OBP over .300. Still, despite the Uptons' diminished stature, the combination of speed, offense, and defense that the Braves have, not to mention the unusual family configuration (prompting memories of Griffey pere et fils and the Alou brothers) We can throw Andrelton Simmons in here too; he played well enough before getting hurt last year to whet our interest, then turned it up a notch in the WBC.

Some players took a giant step forward last year, but then took a giant step back. Matt Kemp can blame injury, but consider Andrew McCutchen of the Pirates, who hit an incredible .392/.450/.706 from May through July, but then cooled to .253/.354/.425 over the last two months of the season. David Wright of the Mets hit .351/.441/.563 in the first half, rates that, if he had sustained them throughout the season, would have ranked among the best by a third baseman in history. Instead, he hit just .258/.334/.416 after the break. The Reds' Jay Bruce alternated months of hitting .290 and slugging .600 with months of hitting .220 and slugging .450. It's unlikely that any of these players will achieve that level of consistency, but should they do so, they might win the coveted hardware they missed on last year. -- Steven Goldman

• Yankees trade for Vernon Wells: A desperate cry for help

• The funny thing about spring stats is ...

• The rise of the called strike