The Royals take a small step away from mediocrity

Sometimes who a team cuts says more about them than who they keep.

Share All sharing options for: The Royals take a small step away from mediocrity

One winter when Casey Stengel was managing the Brooklyn Dodgers, the world-champion St. Louis Cardinals released a couple of outfielders out of what was the deepest pile of players in the game. Reporters asked Stengel if he was interested in signing them. His response: "How can I beat the Cardinals with players who aren't good enough to be Cardinals?" I've always felt a little unsure of Casey's logic there -- if St. Louis's worst outfielder is better than your worst outfielder, you've still made a net improvement -- but I think he was making a more general point about the quality of those players that remains true today: There has always been a clear difference between championship-quality regulars and everybody else.

The players the Cardinals released were nondescript, garden-variety outfielders for the time. They weren't sluggers, they didn't hit for outstanding averages, and they weren't defensive outfielders. They were just there, and the Cardinals, who were run by Branch Rickey at the time, understood that you don't defend a pennant with that kind of player. Further, having a preponderance of this kind of player is the mark of a mediocre ballclub.

On Wednesday, the Royals re-signed Xavier Nady to a minor league contract, having cut him earlier in the week. Nady has been on the major league scene for over 10 years now, and with the exception of an out-of-character half-season with the Pirates in 2008, he has been the 21st century equivalent of the kind of player the Cardinals were cutting back in the 1930s. His career rates of .270/.324/.432 work out to an OPS+ of 99, or almost exactly average. Throw in a glove that has been neither helpful nor especially hurtful and put aside the aforementioned fraction of '08, and his career WAR total is almost exactly zero -- he's been better than a replacement-level player, but not so much that you'd notice it.

Appropriately, his teams haven't been very good, with franchises like the Pirates and Cubs on his resume. The average team for which Nady has been a regular or semi-regular has gone 79-83. He was either incidental to his few good teams or they were better without him. The 2006 Mets, well on their way to a division title (they were leading by 13.5 games at the time), traded him out of town at midseason. The Yankees acquired him at a particularly desperate and ill-considered moment in 2008 and failed to make the playoffs for the only time since the strike. The 2011 NL West-champion Diamondbacks played .555 baseball until Nady got hurt, .651 thereafter. Last year he played for both the NL East-champion Nationals and the World Champion Giants, but in the case of the former he was actively hurting them, hitting .157/.211/.275 in 109 PAs, and he contributed little to the latter. Nady also appeared in the postseason with the 2005 San Diego Padres, an 82-80 club that won the NL West in a season in which the division was so weak it was an open question until the season's final week if any team would finish with a winning record.

It is for this reason that Nady's failure to make the Royals is a significant step on their long road back from irrelevance. (That they retained him for their Triple-A team is irrelevant -- minor-league teams always need bodies.) The Royals, as with their NL cousins, the Pirates, and until last season, the Orioles, have been defying gravity for years. Baseball has several mechanisms in place that should, with basic competence, pull bad teams upward in the standings .500. The historic symbol of poor team management has always been the Philadelphia Phillies of 1918 through 1948. The Phils had one winning season in those 31 years and lost 90 or more games 23 times, and over 100 games 12 times. Yet, those old-time teams couldn't build through the amateur draft, free agency, or the international talent market, and since this was the sorry era of apartheid baseball, they could only recruit the best white players rather than the best players, period. In the 28 seasons since the Royals won the 1985 World Series, they have had access to all of these things. Nevertheless, they have had just seven winning seasons in that time, and just one in the last 18 years. Eleven of those 18 seasons have resulted in 90 or more losses. The institutional advantages enjoyed by the Royals make their half-hearted attempts at contention far more pathetic than those old-time Phillies. 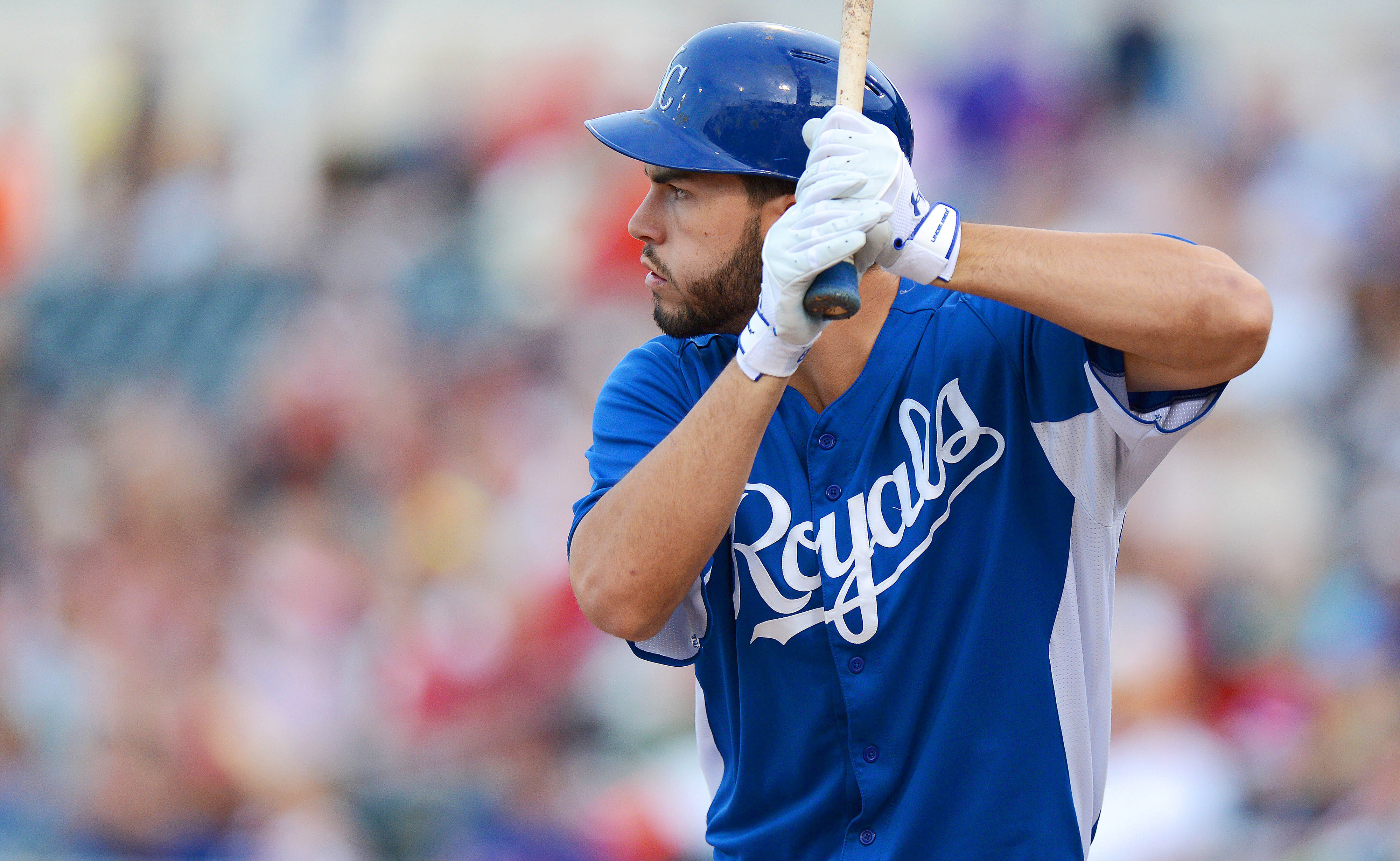 Eric Hosmer has had a strong spring. (USA TODAY Sports)

The reasons for the Royals' ongoing failure have been amply dissected elsewhere; suffice it to say the buck should stop with owner David Glass and general managers Herk Robinson, Allard Baird, and Dayton Moore. That being said, one is tempted to give the GMs a pass given the extraordinary lack of cash resources the team has had at the major league level; in those 18 seasons, the Royals have had one of the league's bottom four payrolls 14 times.

As a result, many of the few strong players the Royals have developed during this period, from Johnny Damon to Carlos Beltran to Zack Greinke, were traded for little return as they headed for free agency. Their first-round draft selections between Damon (1992) and Billy Butler 2004) could best be described as "Zack Greinke and a litany of busts," and they have almost completely failed to exploit the Dominican Republic, Cuba, Japan (the next at-bat you see by a Japanese national in a Royals uniform will be the first), or Taiwan. Current Royals Salvador Perez and Alcides Escobar are their first players of note from Valenzuela, and only the former was developed by the team. If not for four seasons of Joakim "The Mexecutioner" Soria, you might wonder if the Royals scouts were simply bypassing everywhere in the world that Latino baseball talent is known to congregate.

The Royals' 2013 rotation could be their best in ages 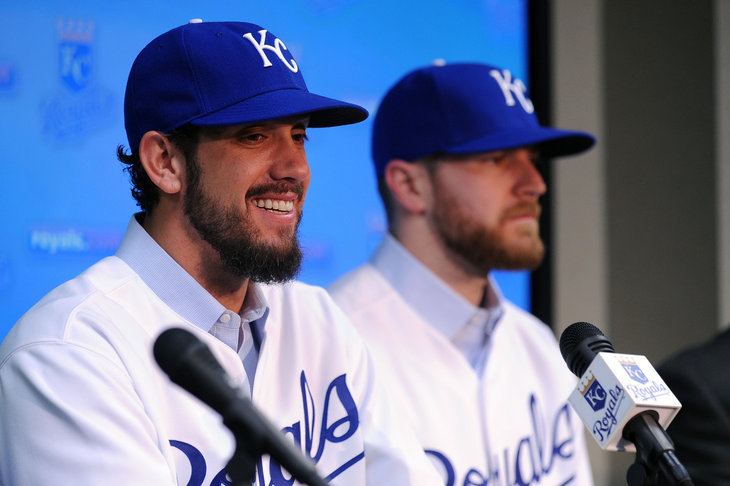 It's all relative, but this is the best Royals' rotation in years

Now things have changed, at least a little bit. Beginning with Butler in 2004, the Royals have better leveraged their first-round picks, drafting current big-league regulars Alex Gordon, Mike Moustakas, and Eric Hosmer, as well as reliever Aaron Crow. Top outfield prospect Wil Myers, since traded to the Rays for James Shields, came in 2009's third round. Perez gives them the rare win on the international scene, Escobar, acquired from the Brewers as part of the package for Greinke, shows that the Royals can identify a promising player on the trade market. Baseball America listed three of the team's farmhands in its 2013 top-100 prospects list: pitchers Kyle Zimmer and Yordano Ventura (yes, of the Dominican Republic), and outfielder Bubba Starling.

Best of all, the team has been proactive in signing some of these young players to contracts that buy out their arbitration years and delay the arrival of free agency.

Not all is perfect. Hosmer and Moustakas have yet to hit, Jeff Francoeur is still hanging around gobbling up outs, and touted pitching prospects such as Danny Duffy and Mike Montgomery have gotten hurt or flamed out, resulting in trades for Shields, Wade Davis, and Ervin Santana. It may well be that this rebuilding cycle, so much more promising than any that preceded it, will fail to pay off. Still, this much is certain: the team of Ken Harvey, Mark Teahen, Joey Gathright, of Ross Gload, Neifi Perez, and Yuniesky Betancourt -- of players who were just kind of there or worse, no longer has room for Xavier Nady, even as a reserve. Even if the long-awaited winning season doesn't come this year, it's a positive sign.