MLB 2013 season predictions from a cat

People can predict baseball without even trying, but what about Marc's cat?

Share All sharing options for: MLB 2013 season predictions from a cat

Baseball predictions are something anyone can do. You don't need to know anything about baseball to pick division winners or an eventual World Series champion. Give someone a list of teams, and the odds of their selecting the winner aren't much worse than someone who has spent their off-season poring over the numbers. So many crazy things can happen over the course of the season that, expertise or no, we all end up with a 1-in-30 shot of being correct about a World Series' winner.

With this in mind, rather than ask a person about predictions in order to get another boring guess at the season, I've decided -- as has Baseball Prospectus's Jason Wojciechowski -- to ask a different kind of friend of mine. Meet Kitty Sanchez: 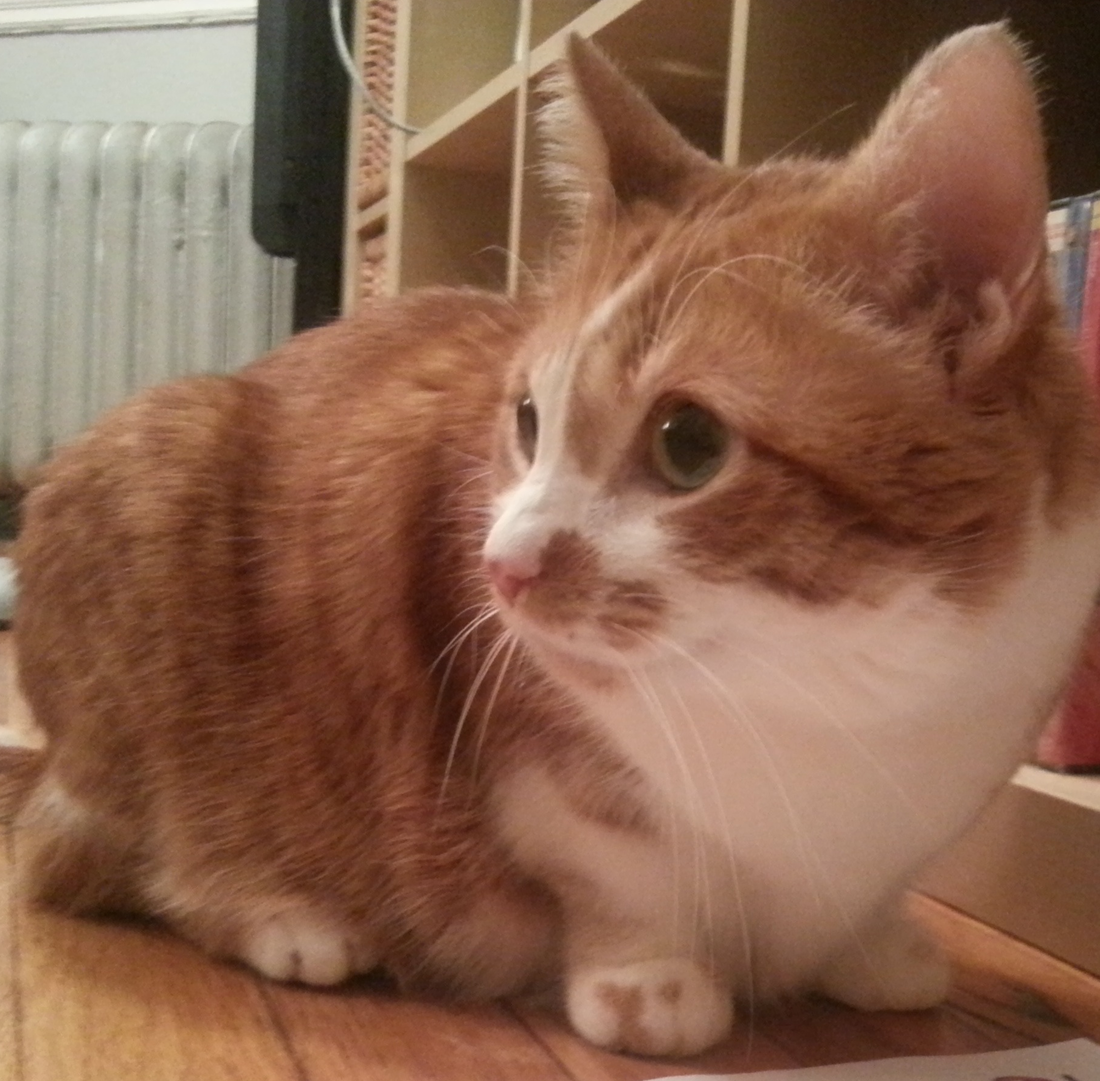 Kitty is nine years old, a cat, and, as far as I know, is not a devoted baseball fan. What we are here to find out today is whether or not these things will get in the way of her ability to accurately predict the outcome of the 2013 Major League Baseball season. Jason, over at Prospectus, did the same with his own cats. This experiment went like so:

One sheet was printed out for each league, with the logos of said leagues' teams residing on them. Thanks to the Astros' switch to the AL, they were even evenly balanced: 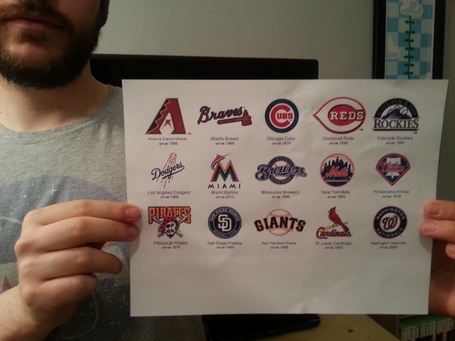 Why a sheet with logos? Because cats, especially Kitty Sanchez, love cat treats. By placing a treat on the team logos, one division at a time, Kitty could pick her division winners, as well as wild cards, when the situation merited it. That last part was a little tough, but thankfully, Kitty spent her time switching between very interested in the treats, and walking away from them. Her disinterest was used as the cutoff point for whether or not she believed any teams from a division were worthy wild cards.

Then, the playoffs were determined by putting treats on all of the selected teams that made the first cut, and seeing which two Kitty would eat first. Those two teams made their respective championship series. Then, Kitty was able to choose between those two clubs' treats in order to pick the league's World Series representative.

I used different cat treats for each league. The AL, which went first, was decided with the use of Temptations, which are apparently crunchy on the outside but soft on the inside. Also, the cat on the bag is using a hair dryer.

For the NL, a bag of Friskies Party Mix: Mixed Grill was used. These had no soft insides, but hey, crunchy outsides! My cats don't usually eat treats, and I'm sure these treats aren't as healthy for them as the Science Diet food they generally eat, but we all have to make sacrifices for science. Plus, Kitty was super happy about the fact I kept putting treats in front of her.

The sheet was placed in a spot in my living room that Kitty could approach from three sides. She didn't just eat the first treat she saw, which was my fear going into this. Basically, she was held while the treats were rearranged, and then placed on the ground to sniff out her picks. Like so: 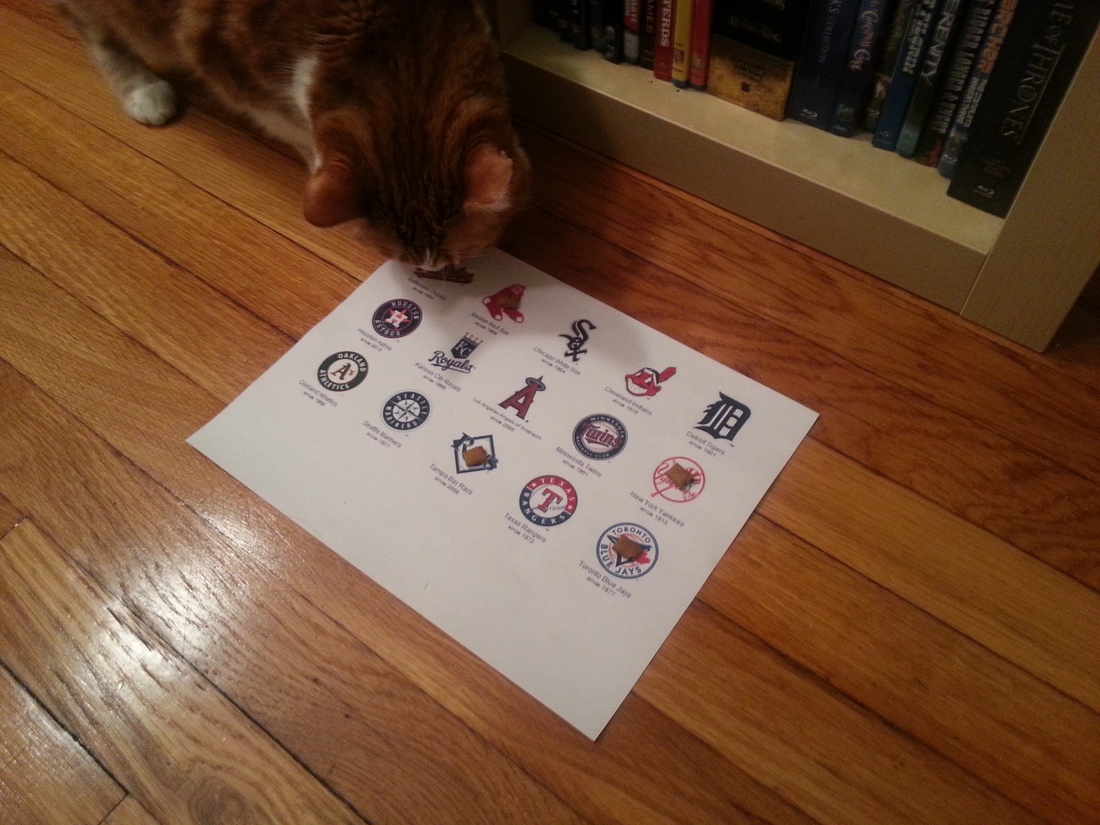 Now that we have the conditions in place, let's get to the picks.

In the AL, Kitty selected the Orioles, Royals, and Angels as division winners. Kitty is apparently an enormous James Shields' fan, and likes the birds in the east to maintain just enough of last year's luck to stick atop the division. She also picked the Red Sox as a wild card, but before you laugh about that, know that her other wild card was the Astros.

I'm not sure Kitty is fully up to this challenge at this point, but we'll see.

In the playoffs, Kitty picked the Angels and the Red Sox to advance to the ALCS, with the Angels emerging triumphant from this snack-off. Sure, she stumbled with that Astros pick, but she rebounds here, even managing to pick an off-season front-runner like she's on ESPN's payroll or something.

At least it wasn't the Blue Jays, I guess.

The National League went a bit more smoothly than the American League, at least in terms of believability in her picks. Kitty's division winners were the Nationals, Brewers, and your defending World Champion Giants, while her wild cards were the Reds and the Mets. We'll forgive her Mets prediction since she made it before we heard Johan Santana is out for the year.

The Reds took on the Giants in the NLCS, with the Giants taking down the Reds, one treat to zero.

The World Series had to be done a little differently than the rest of the picks, since both leagues were now involved. So, the sheets were placed next to each other, and Kitty was placed in front of them, a ways back so she didn't just go to the closest treat. 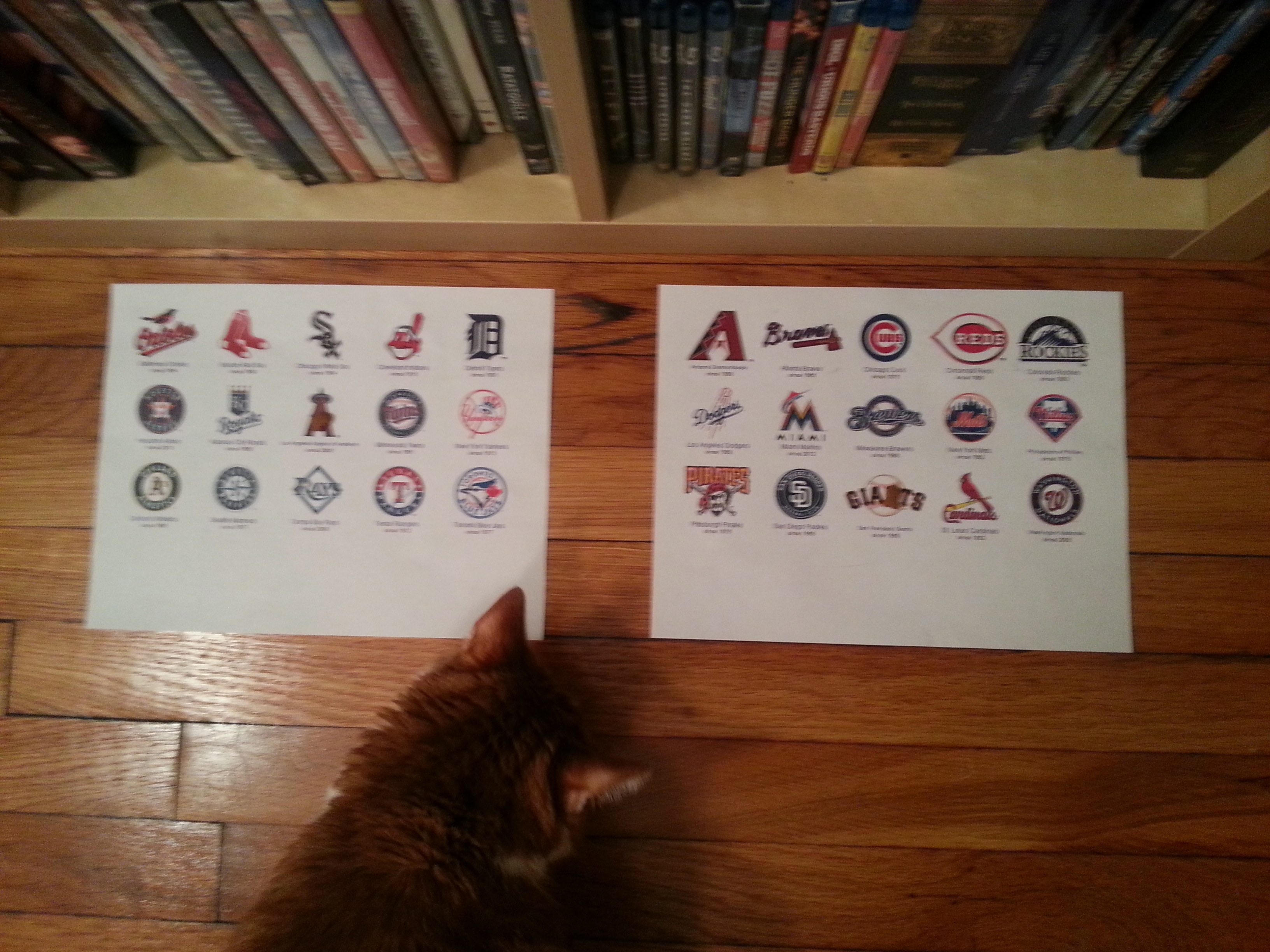 It comes to this. Angels on the left, Giants on the right, and Kitty Sanchez betwixt them. Would she go with the popular pick, the new Josh Hamilton club, or the defending champs? Las Vegas has the Angels at 17/2 odds of winning the World Series, fourth-best among all clubs, while the Giants are seventh at 12/1, so she has some major considerations to contend with here.

After much deliberating, and a zig following a zag, Kitty made her choice for 2013's World Series winner: 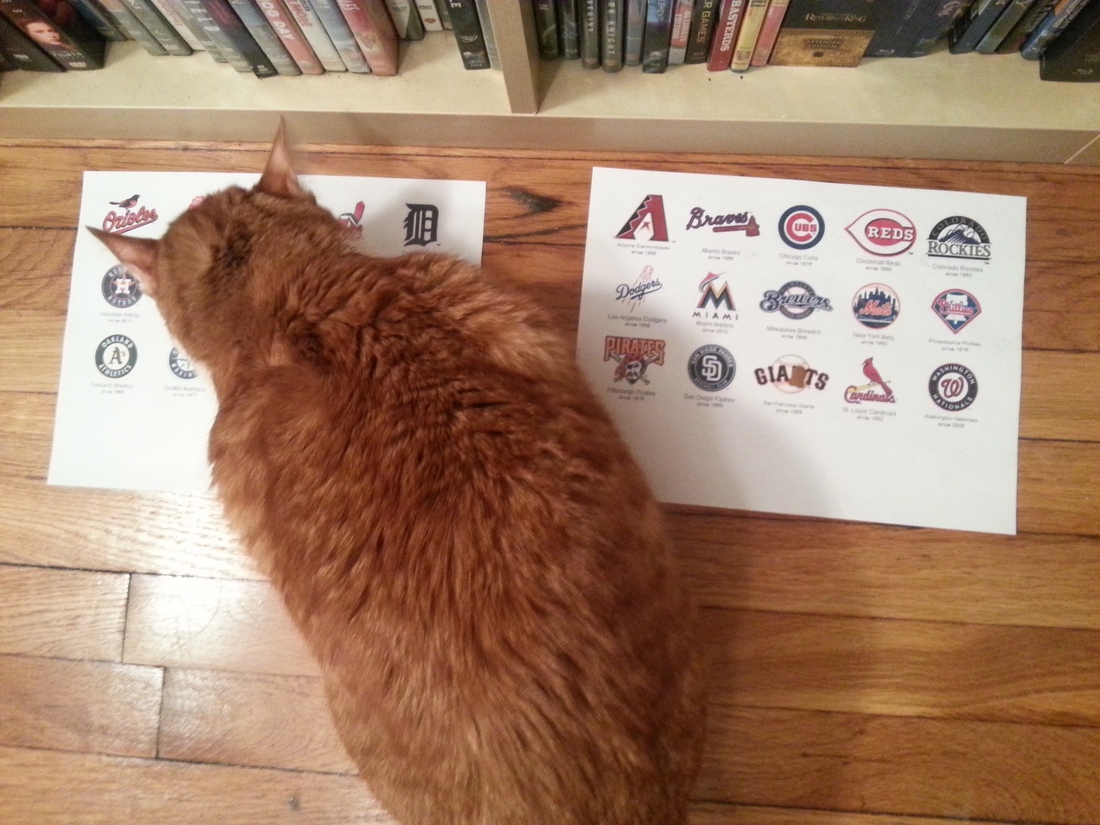 So, what have we learned? You not only can make baseball predictions without paying attention to the sport, but you can also be a cat that's just in it for the treats and still come out looking mostly intelligent.

Just for kicks, here are my own predictions for 2013. We'll see who is the better guesser at year's end: the cat, or her baseball-writer owner.