Free agency is dead and the Rangers know it.

Share All sharing options for: Elvis Andrus deal shows the Rangers thinking ahead

When Buster Posey and the Giants came to terms on an eight-year contract extension last night, SBN columnist Cliff Corcoran made an excellent point over at SI.com:

That contract, coming hot on the heels of Justin Verlander's five-year, $140 million extension through the 2019 season signed earlier in the day, sends a clear signal to teams hoping to land elite talent via free agency that they need to find another way.

The game is presently experiencing a massive inflow of cash due to new television deals. Five teams, including the Rangers, have signed long-term deals worth over $1 billion. This has encouraged free-spending bravado on the part of some teams, and that in turn has exerted pressure on others to do likewise. Rather than allow their players to go through arbitration and reach free agency, teams are locking them up. The eventual result, Corcoran predicts, is that, "the only superstar players likely to hit the market are the ones who are flat-out determined to do so."

Keep that in mind when wondering why the Rangers, who have the best prospect in the game in shortstop Jurickson Profar all dressed up with no place to go at Triple-A, just extended Elvis Andrus' contract by eight years and $120 million, tying up his rights through 2022. Andrus, one of the lasting gifts of the long-ago Mark Teixeira trade with the Braves, now qualifies as one of the best all-around shortstops in the game. Still a light hitter in general terms, he provides above-average offense for his position at a time in which the average major-league shortstop hit .257/.310/.378 last year, and while he hasn't yet won a Gold Glove, it's only a matter of time before the baseball establishment wakes up to his skill on defense.

Andrus has had to grow up in public, having come up young. He's improved his offense slightly in each of the last two seasons. While his stature and ground-ball-oriented approach probably precludes his adding anything like real power, a few more balls hit into the gaps or a slightly more discerning eye at the plate, resulting in more frequent favorable hitting counts, would add enough offense that Andrus could truncate the "good hitter for a shortstop label" after the second word. He showed a bit of both last season, and at 24 might not be done making improvements.

When it comes to two-way middle infielders, you can never have too much of a good thing. Positional scarcity means that along as Andrus maintains a modicum of his present value, his contract won't be an impediment to moving him should the club choose to move him in favor of Profar at some point, and in fact may be an asset given the way the $20 million per year is getting to be no big deal; a few years from now, Andrus' average $15 million a year might seem like something of a bargain.

The extension, which won't kick for another two years, doesn't really change the logjam the Rangers were already facing, and the team will have some decisions to make given that Profar seems to be pretty much ready to go. Second baseman Ian Kinsler is signed through 2017 (with a team option on 2018), but it's unlikely he maintains his value for anything like that long -- he's already 31 and second basemen generally don't get long second acts to their careers. He could see some time at first base over the next few years given that the Rangers are relatively weak there (Mitch Moreland being as uninspiring as a red, white, and brown flag on the Fourth of July), though (A) his bat doesn't really stand out there except on a platoon basis, (B) there's that aforementioned bit about a potentially-imminent decline, and (C), that doesn't help the Rangers leverage Mike Olt, a third/first baseman presently blocked by Adrian Beltre. 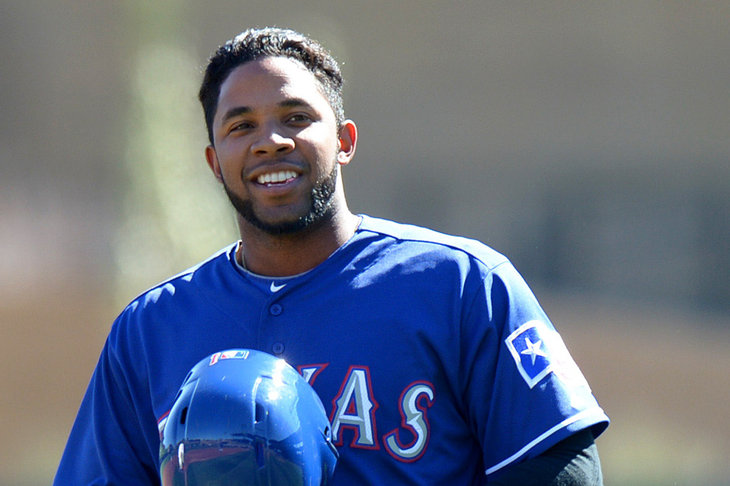 Texas has locked up their young shortstop through at least the end of the decade.

Barring injury or a dramatic trade, there could be a whole lot o' job-sharing action in Texas in the near future, with perhaps even some outfield time mixed in. That's not a bad thing at all; as managers from Casey Stengel to Joe Maddon have shown, multi-axis platoons can protect a team from injury and its players from their own weaknesses. Profar is a switch-hitter, while Andrus and Kinsler are right-handed. Moreland, and left fielder David Murphy are left-handed; ostensible switch-hitter Lance Berkman might as well be given how he has typically struggled against southpaws. If Ron Washington is up to some creative juggling, the Rangers could protect everyone from their weaknesses right now and get Profar to the majors in the process.

Some of these issues are likely transient. Murphy is a free agent after the season, Moreland, about to reach arbitration eligibility, might not be worth the raise, and even if Berkman's 2014 option vests with 550 plate appearances, he can be bought out for $1 million. There is also the inevitable injury coming to whoever, whenever. Bottom line, free agency is dead, the Rangers have a huge pile of chips on their side of the table, and whether they deal them or keep them they win, having decisively tightened their control over their team architecture.

• Boisball Cards! Everyone is on the DL or should be