Share All sharing options for: Carlos Quentin an HBP magnet

I listen to The Ancient World podcast regularly. This week, I learned about Thales of Miletus, who is considered the father of science in that he was among the first to use the scientific method. Thales, along with other leading thinkers of his day, was asked to inscribe a maxim to live by into the Temple of Apollo at Delphi. He wrote, "Know thyself."

Carlos Quentin should take heed. It's understandable that a player would get angry at getting hit by a pitch. After all, that hurts like hell. But you'd think Quentin should be used to it by now. After all, he gets hit a lot. Like a lot, a lot. Since Carlos Quentin debuted in 2006, major leaguers have gotten hit by a pitch in roughly 0.9 percent of their plate appearances. That number has been steadily decreasing:

Carlos Quentin, on the other hand has been hit 115 times in 2m793 plate appearances, which is 4.1 percent. Again, Carlos Quentin gets hit more than four times more often than the major league average.

You might be thinking, "Wow, that sounds like a lot." Congratulations -- you're correct. Here are the active MLB leaders in HBP percentage (more than 1000 career PAs):

Yes, Carlos Quentin gets hit almost 25 percent more often than his closest competitor. And if you think that seems ridiculous, just hold on a second while I blow your mind here:

No excuses for Carlos Quentin ... but 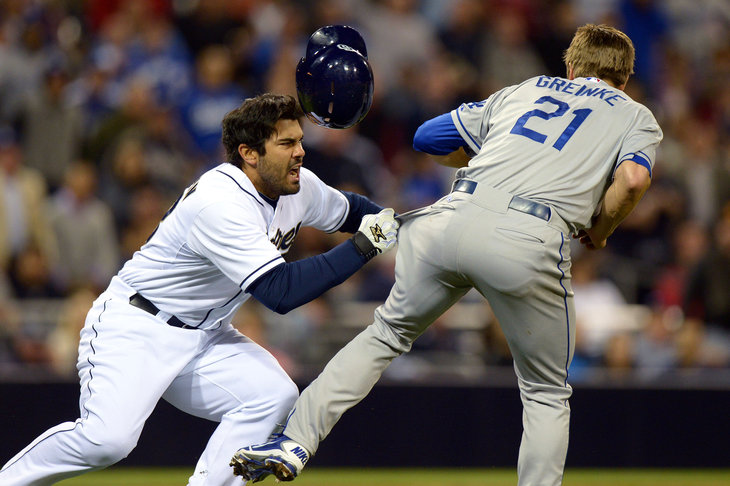 Quentin beats them handily: Quentin gets hit by pitches at a higher rate than anyone in modern baseball history. The only man to get hit more regularly is Hall of Famer Hughie Jennings, who was hit 287 times between 1891 and 1903 in 5851 plate appearances.

So, look, I get getting hit by pitches hurts, and I understand being angry. But maybe when you're the guy who gets hit more often than anyone else in the last 110 years, it's more about you than it is about the guys who are hitting you. Maybe cut them some slack and don't charge the mound like an idiot. You're apparently really hard to miss.

• Neyer: No excuses for Carlos Quentin, but ...

• The Miami Marlins, attendance, and affordability