Stephen Strasburg lifted after 80 pitches, but not for why you think

Was Strasburg taken out early because of concern over his workload, or are we all just a bit jumpy on that topic?

Share All sharing options for: Stephen Strasburg lifted after 80 pitches, but not for why you think

In 2012, Stephen Strasburg made bigger waves in the industry with the innings he didn't throw rather than the 159 he did. The Nationals put their 23-year-old ace, who had yet to pitch a full season in the majors and was coming off of Tommy John surgery, on an innings limit, a plan that would have barely been noticed had Washington not entered the playoff picture. While Strasburg still set a career-high for innings as a pro, jumping from 2010's 123 frames, there was outcry that he could have been pushed even further.

Given all that, it's easy to see why fans on both a local and national scale would be a bit jumpy when they saw Strasburg was removed from his Opening Day start on Monday after just 80 pitches. Strasburg, who has never pitched past the seventh inning in his career, finally had an opportunity to do so, but manager Davey Johnson pulled him before he could. Was this Johnson being a bit overprotective of his young hurler, a continuation of 2012's policies? Probably not, as Bill Ladson's column at MLB.com explains:

Manager Davey Johnson believed that Strasburg could have gone more than seven innings, but the atmosphere of Opening Day was too much for Strasburg to handle.

"Any other day, I would have gone further with him, but with the adrenaline going on Opening Day, he could have been a little spent," Johnson said. "But he was outstanding.

Johnson's argument makes sense, but it's also the kind of thing none of us can verify from watching the game. We don't know if Strasburg was a bit more tired than normal at 80 pitches, but the fact he didn't freak out about the decision when given the opportunity probably tells you all you need to know:

"I felt great after seven innings. If it wasn't Opening Day and the first start of the year, it would have been a different story."

Let's compare that to some of Strasburg's other quotes in regard to his innings limit. When asked by Jim Bowden about possibly pitching in Game 1 of the World Series (a true hypothetical given this conversation happened in July), despite the innings limit, Strasburg said, "Well, they're gonna have to rip the ball out of my hands, that's all I can say." The Nationals didn't make it that far in the playoffs, but no one had to tear the ball from his fingers for any of the Division Series games. Still, it was clear he felt strongly about it.

Fast-forward a little to February, when Strasburg said that he wanted to, "throw 200-plus innings and be the guy in the rotation that can be reliable and go six, seven, eight, hopefully nine innings this year every time out." He did get that seventh inning on Monday, but also acknowledged in a normal situation he could have pitched through that eighth or ninth frame he also wanted. It did sound like he's willing to let the team decide when that's okay, though, saying, "if you want me to go out there for another inning, I'm your guy." If Johnson is to be believed, next time, they probably will want that extra inning. 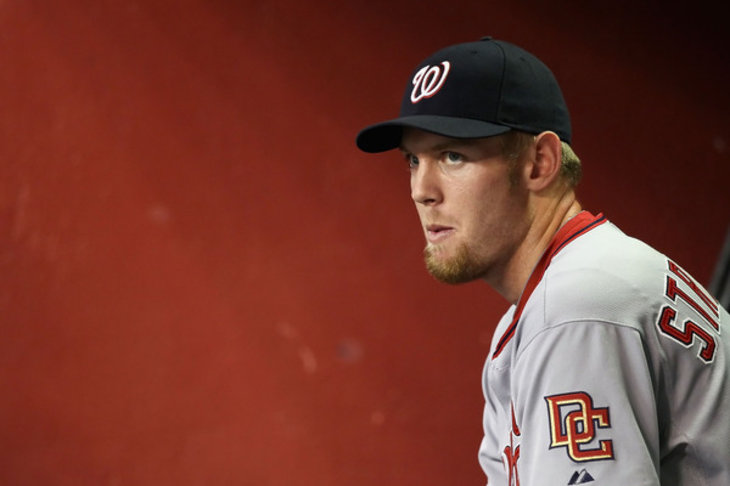 Strasburg equates being a top pitcher with high pitch counts. His attitude is admirable but his priorities may ultimately be self-defeating.

Going that extra frame is going to likely necessitate a change in Strasburg as well, but if yesterday was any indication, he's aware. He had said over the winter he wanted to improve his fastball command and rely on his sinker more in order to generate faster plate appearances with more ground outs and fewer fouled off pitches, and that's just what went down in his first start of 2013. Strasburg struck out just three batters, but made up for it with 10 ground outs and zero walks. That's not to say Strasburg should continue to pitch like he can't strike out batters, but it's good to see that, rather than push the strikeout thing in at-bats where it makes more sense to pitch-to-contact, he just might be able to.

A Strasburg that can efficiently put batters away while punching them out when he needs to is a dangerous thing for opposing hitters, and if he can master that over the course of this year, you won't be hearing about any workload concerns again. He'll be setting hitters down with ease, as quickly as he needs to, and that opportunity to pitch past the seventh inning will come up again and again.

• After inking Andrus, what do the Rangers do now?