Josh Hamilton's tough night, month, 10 months, whatever: 0-for-8 against the Athletics

The Angels' slugger had a rough night at the plate, but his issues started well before that.

Share All sharing options for: Josh Hamilton's tough night, month, 10 months, whatever: 0-for-8 against the Athletics

The Athletics and Angels played a 19-inning game on Monday night, one that went so late into the morning that MLB.com beat writer Jane Lee didn't even publish her game recap until 6:50 am, eastern time. As there always are with extra inning games of unusual size, there are moments that pop out to perpetuate the length of the contest, both good and bad. Josh Hamilton had himself a hand in quite a few moments in this six hour and 32 minute contest, as the Angels' slugger went 0-for-8 with a sac fly, failing to reach base in any of his nine trips to the plate.

Hamilton dropped his OPS from an already low 590 to 544 with his performance, and is now hitting just .202/.246/.298 on the year in 114 plate appearances and 25 games. The sac fly was a positive, as that run scored in the fifth is one of seven reasons the Angels went into extra innings against the Athletics in the first place. Other than that, though, he contributed nothing at the plate, instead becoming one of the 64 players in the designated hitter era (since 1973) to go at least 0-for-8 in a single game.* In addition, this makes seven consecutive losses for Josh Hamilton teams against the A's, as the Rangers were swept by the Athletics and pushed out of the division lead to end 2012's regular season, and Monday represented the fourth loss in four games to the A's after signing with the Angels.

*He is, however, one of only four to still drive in a run. So he's got that going for him.

His three strikeouts are notable for two reasons: first, they place him #11 among those 64, though, Angels fans can take solace in the fact that their team punched out Boston's Cecil Cooper six times to lead the group back in 1974. Second, per Baseball Prospectus' Sam Miller:

To be fair, Marco Scutaro tends to strike out looking, and rarely goes down by way of a swinging K. Still, though, Hamilton is fourth in the majors among qualified hitters in swinging strike percentage, as he's whiffed straight through 18 percent of the strikes he's seen. That puts him right alongside Colby Rasmus (.225/.287/.438), Pedro Alvarez (.188/.255/.329), Ryan Howard (.286/.299/.462), and Jeff Francoeur (.250/.284/.333) as one of five hitters at 18 percent or more. Hamilton didn't used to miss this much, but in his last year with the Rangers, he registered a swinging strike a career-high 20 percent of the time: it'd be easier to ignore his April swing-and-misses as small sample fluff if not for that eye-popping figure resting right above it.

Speaking of last year, remember when Hamilton got off to that ridiculous start that was looking like it could mean at least 60 homers? He cooled off by the time June rolled around, and since June 1, has hit .236/.306/.446 in 543 plate appearances. He has struck out 29 percent of the time since that date, after striking out in just 18 percent of his plate appearances in his career up to that point.

It only takes about 150 plate appearances, per Russell Carleton's research on meaningful sample size and stabilization, for strikeouts per plate appearance to be considered believable. While that is meant to confirm that what has happened was legitimate, it doesn't necessarily mean it will keep happening. Since Hamilton has now gone through what amounts to three-and-a-half "cycles" of strikeout stabilization, though, you can probably assume that, sans drastic change in his approach or bat speed, that things are not going to look up on that front anytime soon. Said drastic change could be in the cards -- remember when David Ortiz was considered finished as an elite hitter? -- but the longer Hamilton goes on like this, the harder it is to believe he can reverse course and revive his flagging numbers. 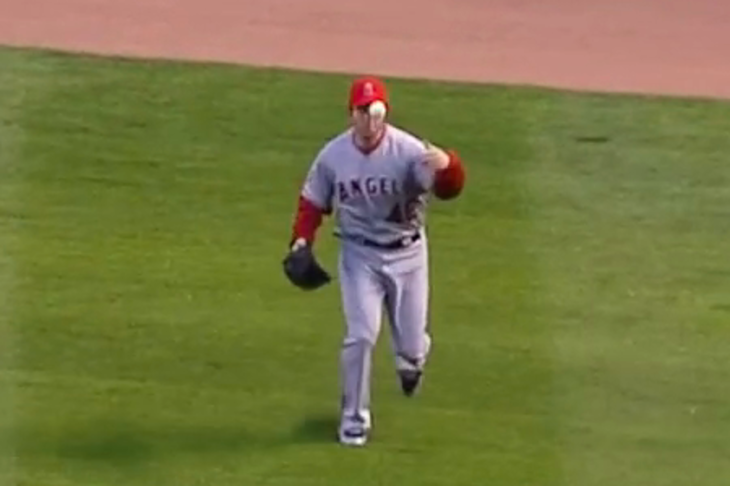 Right in the face, which is not his glove.

Hamilton's issue in 2012 largely had to do with swinging outside of the zone, something pitchers were only too willing to give up to him, even in failure by them, chances were better that he wouldn't be able to hurt them like he could over the plate or inside. Hamilton's early success actually brought this on: pitchers were, at first, likely just trying to avoid having him go deep. When he began to chase, though, they exploited his bad habit, one he hasn't been able to drop if 2013's start means anything. This also showed up in his two-strike numbers, with Hamilton striking out 51 percent of the time with two strikes on him in 2012, against the league's 39 percent. He's maintained that 51 percent mark in 2013, and has been about 40 percent worse with two strikes than the league in the season's early going.

Will Hamilton be able to earn the five-year, $123 million contract he signed with the Angels? That's a question that April can't answer, even if turning back to the calendar a bit, in concert with this first month, paints something of a bleak picture. All we know at this point is that he's off to a terrible start, and if he continues to swing-and-miss as often as he does -- and where he does -- then he's going to struggle to be the kind of run producer the Angels thought they were signing.