At this point, we know Harvey is good. The question should be "just how good will he be?"

Share All sharing options for: Matt Harvey has arrived

If you're a Mets fan, you're already well aware of who Matt Harvey is and what he's capable of. Nationally, though, it's taken the rest of us a little longer to come around on him. He's not a prospect that has been all over lists for years, with years of dominating minor-league numbers to look back on like, say, the Cardinals' Shelby Miller. No, Harvey arrived on the pro scene in 2011, made his way to the majors in 2012, and if his performances from the end of last year and his first start of 2013 are any indication, that's all he needed to introduce himself to the rest of the majors.

Harvey was drafted in 2010 with the seventh pick, but he wasn't considered a sure thing. His release point was inconsistent thanks to overly long arm action, his secondary stuff promising but inconsistent, and his control would appear and reappear. Of course, he was still just a kid at the time, with only work as an amateur behind him. He set to work putting these questions behind him, though, tossing 135 innings in his pro debut, striking out over 10 batters per nine across two levels.

Even with the numbers, though, from a scouting perspective, his future was still in doubt. He would be good, that much was clear, but Baseball America was still trying to figure out if he was a front line starter, a quality number two, or someone who, thanks to inconsistent command and the lack of a reliable change-up, was destined to be an impact reliever. The 2012 season brought much needed clarity to all of the above.

Harvey threw 110 innings for Triple-A Buffalo, starting his season there despite just 59 frames at Double-A in his career. While he walked just under four batters per nine, he also punched out over a batter per inning, kept the ball in the park, and earned a ticket to the majors just over two years after he was first drafted. While in the majors, Harvey actually improved despite the stiffer competition, with his walk rate remaining steady but his strikeouts jumping to 10.6 per nine. Sure, there was a little bit of small sample luck in there with his hit rate, but we're still talking about a 3.30 FIP for a 23-year-old in his first 10 starts and 59 innings of major-league pitching.

He did all of this powered by a fastball he could throw anywhere between the low- and high-90s, a hard slider that would sometimes work more like a cutter, and a curve that gave him a slower breaking ball to mix in. If he can get consistency attached to his change-up, there is no question he has the repertoire of an ace. Consider it a goal for 2013, one he seems poised to reach. 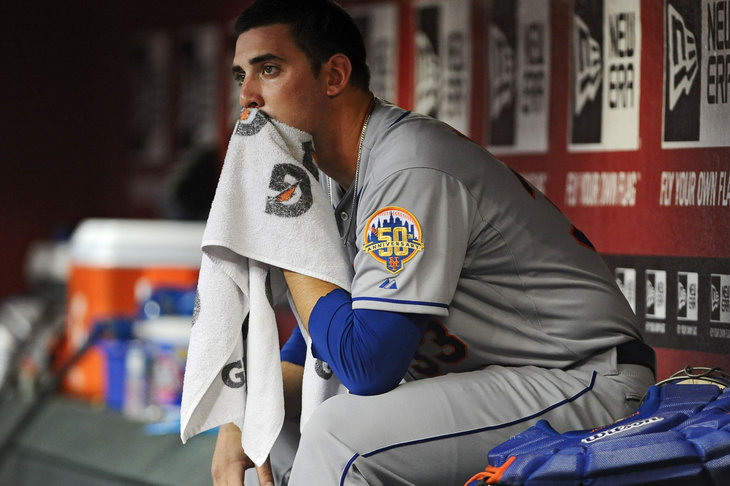 The Mets may not compete this year, but fans will be watching talented young players like the flame-throwing Matt Harvey develop.

Spring training stats are not great for measuring performance, but when someone like Harvey -- who has faced questions about his command and release -- is able to replicate his success from a mechanical perspective, then it's worth paying attention to exhibition performances. He continued to have little trouble finding the strike zone often enough, whiffing 33 batters in 27 spring innings, and against a level of competition Baseball Reference considered to be in between that of the majors and Triple-A.

Those seven pre-season starts served as a segue between his final start of 2012, when he struck out seven batters in seven innings while dropping his ERA to 2.73, and his first start of 2013. Harvey owned the Padres on Wednesday night: he punched out 10 Friars in seven frames, allowed a pair of walks and just one hit, and shut out San Diego for the duration of his start. It took him just 94 efficient pitches to get through those seven innings, too, a good sign for a pitcher that has had trouble with walks and lengthening his outings. It's just one start, but it's something to build on.

The Mets could use the arrival of Matt Harvey, front line pitcher, and they could use it now. With Johan Santana out, putting an end to his Mets' career, and knuckler R.A. Dickey now a Blue Jay, there is a vacancy atop the New York rotation. That sign won't have to hang in Citi Field's window for very long if Harvey keeps at what he's done in his limited major-league time, though.

• Is Houston's lineup built to be no-hit?