The great critic is gone, but his words live on. Baseball films made up a small part of the vast list of films he covered, and there wasn't a "Citizen Kane" in the batch, but Ebert still spilled some of his fine prose on their behalf.

Share All sharing options for: Roger Ebert on Baseball Films

Roger Ebert has passed. I'm going to save the eulogy for someone far more eloquent and will just say he's one of three professional film reviewers I can name, one of whom precedes him in death and the other whose biblical volumes occupy no less than a third of my father-in-law's fireplace mantle. I liked him far more as an adult than I did as a kid, but that's because he ripped films I liked as a kid and as an adult I realize he was right about most of them.

The best thing about Roger Ebert's approach to criticism -- and why he remained imminently approachable by so many -- was that he judged films based on their own merits, forgave them for budget-based faults (mostly), and agreed to suspend his disbelief as long as the director agreed to honor that suspension with significant effort.

In other words, he was a pretty good judge of what most people would probably like. And most people like baseball movies, like I do and you probably do. Here are some selected quotes from Ebert on some of my favorites.

"THE NATURAL could have been a decent movie. One reason that it is not: Of all its characters, the only one we don't want to know more about is Roy Hobbs.

I'd love to get to know Pop Fisher (Wilford Brimley), the cynical, old team manager. Robert Duvall, as the evil sportswriter, Max Mercy, has had his part cut so badly that we only know he's evil because he practically tells us. Richard Farnsworth, as a kindly coach, has a smile that's more genuine than anything else in the movie. But you have to look quick."

As "Field of Dreams" developed this fantasy, I found myself being willingly drawn into it. Movies are often so timid these days, so afraid to take flights of the imagination, that there is something grand and brave about a movie where a voice tells a farmer to build a baseball diamond so that Shoeless Joe Jackson can materialize out of the cornfield and hit a few fly balls.

This is the kind of movie Frank Capra might have directed, and James Stewart might have starred in -- a movie about dreams.

"All of this is pretty much as we'd expect it, and there are obligatory scenes in which the Bears finally get their uniforms, Matthau finally shaves, the boys say they won't wear their athletic supporters until Amanda wears one, too . . . and the team wins its first game.

But beneath this entertaining surface stuff, there's something else going on. We begin to sense how important, how really crucial, Little League is to the adults involved in it. How much emphasis they place on winning."

Err ... Roger didn't review Major League, but for some reason he DID review "Major League II," where this wonderful gem appears:

"Fans of ‘Major League' (1989) may want to see ‘Major League II.' I did not see the first film and am not in that category. Nor is there anything in ‘Major League II' that inspires me to go back and catch up on the earlier film."

"The movie has a real bittersweet charm. The baseball sequences, we've seen before. What's fresh are the personalities of the players, the gradual unfolding of their coach and the way this early chapter of women's liberation fit into the hidebound traditions of professional baseball.

By the end, when the women get together again for their reunion, it's touching, the way they have to admit that, whaddaya know, they really were pioneers." 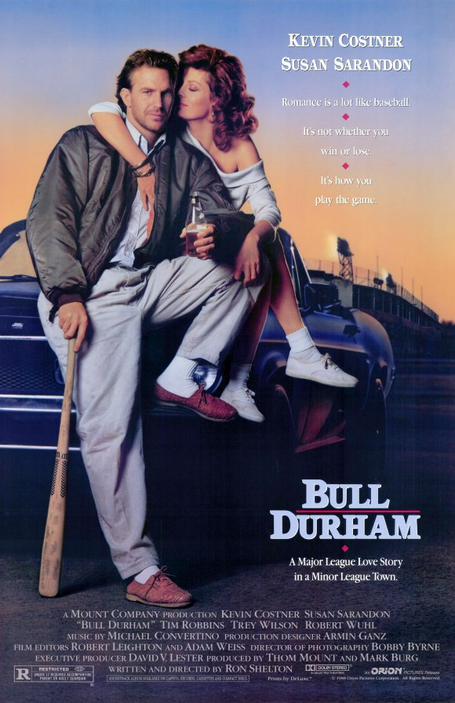 "‘Bull Durham' is a treasure of a movie because it knows so much about baseball and so little about love. The movie is a completely unrealistic romantic fantasy, and in the real world the delicate little balancing act of these three people would crash into pieces.

"What's really touching is the way Lindsey works and works to try to understand Ben. When he tries to tell her why he loves the Red Sox even though they always, always let him down, she says, "You have a lyrical soul. You can live under the best and worst conditions."

What she doesn't understand is that the girlfriend of a Red Sox fan must also endure the best and the worst, and have a soul not only lyrical but forgiving. How does it feel when his Sox tickets are always more important than anything she suggests? ‘Here's a tip, Ben,' she says. ‘When your girlfriend says let's go to Paris for the weekend -- you go.'"

"I was absolutely lousy in Little League. I was a sub for one season, screwing up every play I was involved in. I stopped out there in the middle of right field, squinting into the sun, hoping desperately that the ball would not come my way. If it did, I didn't use my glove to catch it. I used the glove for protection.

"I was, in fact, a lot like Henry Rowengartner, the 12-year-old hero of ‘Rookie of the Year.' It seemed like the other kids had always known how to play baseball, and that I would never know. When I was a kid, I think I might have liked ‘Rookie of the Year' a lot. I am no longer a kid, and this movie is not likely to make my list of the year's best, but I can remember those miserable Little League games and so in a modest way I'm grateful for this film. It is pure wish-fulfillment, 40 years after I needed it."

Oh my god, Ebert is gone.

"All of these events are told in an original, quirky, off-center, deliberately exaggerated way. This is not your standard movie about kids and baseball. It's so unconventional, it doesn't even end with the sandlot team winning the Big Game.

This movie doesn't even have a Big Game. (The one game they play is a pushover.) The movie isn't about winning and losing, it's about growing up and facing your fears, and as the kids try one goofy plan after another to get the ball back, the story gently leaves the realm of the possible and ventures into the exaggerations common to all childhood legends."

Credit to good man Larry Granillo who created much the same list several years ago.