Carlos Marmol should never have been a Closer

Putting a wild peg in a square hole rarely leads to good outcomes.

Share All sharing options for: Carlos Marmol should never have been a Closer

In Edward Gorey's 1957 story The Doubtful Guest, one of his many tales that can be described as Dr. Seuss for disturbed children, an odd, birdlike creature in sneakers appears uninvited in the home of an Edwardian family and refuses to leave. It disrupts their lives, being by turns chaotic, destructive, or merely depressed. The story's conclusion imparts a sense of hovering dread:

It came seventeen years ago -- and to this day
It has shown no intention of going away."

For the Cubs, Carlos Marmol is the Doubtful Guest, though with this week's long-in-coming demotion out of the closer's role, it seems unlikely his stay will last 17 years. He's been around roughly half that, and that's been long enough.

That's not to say that Marmol's tenure in Cubbies' blue has been all bad. A unique specimen, Marmol's career rate of 6.0 walks per nine innings ranks as the fifth-highest of the postwar era (500 or more innings), trailing only fellow Cubs closer Mitch Williams, Yankees starter Tommy Byrne, Giants starter John D'Acquisto, and Red Sox reliever Mark Clear. The most recent of those hurlers, Williams, last threw a pitch in anger in 1997. In our own time, the 21st century, Marmol is the king of wildness. Yet, for all of the times Marmol missed his target, batters missed even more often. From 2007 to 2010, they didn't come close to hitting even .200 against him, averaging .169 in 2007, and then, in succeeding years, .135, .170, and .147.

Despite that, he has never been particularly good at converting save opportunities into saves, blowing 26 of 142 opportunities in his career. The resultant 82 percent conversion rate is actually poor by the standards of modern closers, who often enter the game in "soft" situations, such as a three-run lead, which is a save situation by rule but doesn't really rise to the level of crisis -- even the worst major-league pitcher can generally get three outs before three runs score. From 2010 through 2012, Marmol has pitched in 213 games. According to Baseball-Reference, 90 of them, or 42 percent were high-leverage situations, but almost as many, 36 percent, were low-leverage. Given this kind of cushioned usage, Marmol's problems finishing games seems even more pronounced.

That's not the same as saying it's not predictable or understandable. Given Marmol's wildness, he never should have been a closer. For all of his effectiveness at retiring hitters who did swing, those that didn't have reached base roughly one-third of the time. Pitching in sudden-death situations meant that the rare times that Marmol did give up a hit were fraught with danger. If the sequence was wrong, the hit followed a couple of walks and it was nail-biting time, or worse.

That the Cubs made him a closer, and insisted on keeping him in the role for so long (even as, beginning last year, they attempted to trade him), is testament not only to how poorly the Cubs have been run at times, but the confused way teams and managers perceive leverage in baseball games. The ninth inning has been a recurrent problem for the Cubs since Lee Smith was traded after the 1987 season -- for every Randy Myers or Rod Beck, there has been a Mel Rojas or Terry Adams, sometimes in the same season. Marmol himself took over for Kevin Gregg, one of those pitchers who somehow got himself anointed a capital-C Closer despite never having been notably effective in the role. Marmol, as we have seen, was one of the hardest pitchers in baseball to hit and the Cubs had a problem in the ninth, so that was the right place to put him, right?

Wrong. Marmol had the right stuff but was in the wrong spot. The moment of crisis can occur anywhere in a ballgame, not just in the ninth inning. Marmol was the perfect weapon for the middle innings. Deploy him in the sixth or seventh and he might freeze the score right there -- and if he didn't, if his wildness got the better of him, you still had a few at-bats left to get back in the game. The price you paid for using him then would be the occasional meltdown that took a lead and made it smaller, or a tie game and untied it, but there were still chances to escape.

In short, the fault is not in our Marmol, but in ourselves, or more specifically, in the Cubs managers and officials who endorsed the idea of Marmol-as-closer in the first place. We can probably omit Theo Epstein, Jed Hoyer, and Dale Sveum from this indictment; it seems likely that, given the club's well-known desire to trade Marmol and their failure to do so that they hoped to rebuild his value with some early-season heroics, deal him, and then get out of town one step ahead of the sheriff. Their predecessors, however, have no such excuse. 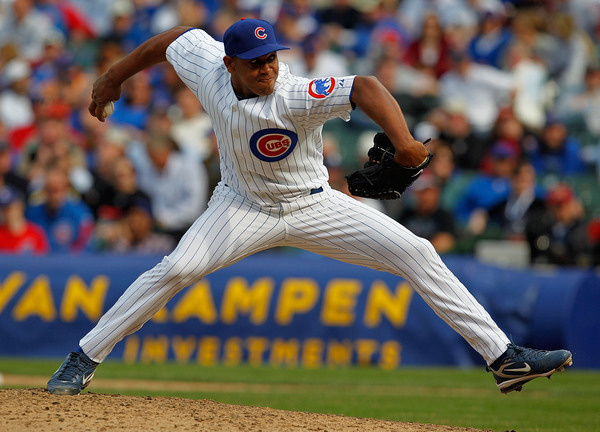 Because teams and the media share an obsession with saves, baseball has gone a few generations downplaying a rather obvious truth: if you take care of the other eight innings, you might not need to pay someone millions to take care of the ninth. We've invested that inning with a special terror that it needn't possess; you can lose a game as easily in the first, or any other frame. With more room to make mistakes, Marmol had excelled in the seventh and eighth innings in 2007 and 2008, and he should have been left there.

There may yet be hope for Marmol should he return to that role. Since his terrific 2010, he's lost a bit off of his fastball. While his slider has retained its value, batters are sitting on the heater and turning it around with a greater frequency than before. And yet, in 2011 and 2012, that meant they hit .200, mostly in singles, instead of .150. Again, Marmol's walks mean those singles can be just as dangerous as a home run in a save situation. He's just not worth the risk. In the middle frames, assuming the .600 average he's allowed so far this year is just a momentary thing, he still might be.

Marmol is making close to $10 million to close this year. That's a lot of money for a rebuilding club to blow on an ineffective pitcher. He has frustrated Cubs fans and management alike with his erratic performances, but no one put a gun to their head and forced them to make him the closer. Marmol is who he is. He's been that pitcher since the day he came to the majors. He's the Doubtful Guest all right, but the Cubs made him that way.

• World Series of the Week: Reds vs. Cardinals

• Fans on the field in Toronto!

• It's time to standardize the DH

• Jackie Robinson and Hollywood go back a ways