Bryce Harper's all-out style could make him another Pete Reiser

Harper's effort is laudable, but brings to mind one of the game's great cautionary tales.

Share All sharing options for: Bryce Harper's all-out style could make him another Pete Reiser

It was a horrifying moment last night in Chavez Ravine when Bryce Harper ran at full speed into an unpadded section of the right field wall, suffering a laceration that required eleven stitches and a jammed shoulder.

The good news, according to his agent Scott Boras, is that Harper did not suffer a concussion. But this is not Bryce Harper's first collision with an outfield fence. In fact, his body last met the wall two weeks ago, when he got banged up leaping to make a catch against the Braves and hit a support pole. Given the speed and intensity with which the Nationals phenom plays the game, it certainly won't be the last. As we've learned in the past year, Harper is aggressive and opportunistic on the ball field. He'll take extra bases and steal home. He doesn't back down from conflict, and is so competitive that he injured himself when the bat he was trying to destroy out of frustration rebounded and hit him in the face, requiring 10 stitches.

All of this intensity, hustle and #tWtW ("the Will to Win," for those of you who aren't in the know) are tremendously entertaining to watch on the baseball field. And there's no doubt that Bryce Harper is one of the most talented young players in baseball history. He's only 174 games into career and has already been worth about seven wins above replacement. I mean, look at this list of the most valuable players through age 20, according to Baseball Reference:

What's even more remarkable, is that, given he doesn't become legally able to buy adult beverages until after the regular season ends, Harper is going to keep climbing this list for the rest of 2013. He very well could wind up on top of it if he stays healthy.

Ah, but that's the big caveat, isn't it? Again, Harper doesn't just get injured; he seems to be courting injury with his tenacious play on the field. Last night, he nearly broke his face in the fifth inning of a blowout in mid-May, when no one would have criticized him for playing the ball off the wall. He just doesn't have a lower gear at this point in his career. 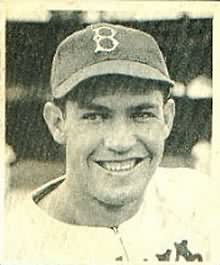 Harper's style of play brings to mind another phenom who took the National League by storm, Pete Reiser. Like Harper, Reiser played the game all out all the time. In 1941, Reiser, 22, led the Senior Circuit in batting average (.343), runs (117), doubles (39), triples (17), total bases (299), slugging percentage (.558), OPS (.964), OPS+ (164), and-somewhat more ominously-hit by pitch (11). He also managed to get on base at a .406 clip, hit 14 homers and was almost certainly the most valuable position player in the league. These numbers obscure Reiser's disturbing habit of running into things and the physical toll that would take. That May, the Associated Press reported that Reiser "has been plagued by physical hard luck for three years," while describing how he "crashed into the wall making a sensational catch of Enos (Country) Slaughter's 400-foot liner in the second inning....[He] held on to the ball long enough to throw it to [Joe] Medwick, then collapsed. A cut in the small of his back required two stitches." During the winter, according to The Pittsburgh Press, Reiser "complained of frequent headaches."

In 1942 he was perhaps even better, hitting .356/.416/.531 through July 18. On July 19, however, Reiser ran full speed into the concrete centerfield wall in St. Louis. As Slaughter (again!) trotted home with a run-off inside-the-park homer, Reiser lay on the ground with, as Steven Goldman put it, "blood pouring out of his ears." Doctors diagnosed him with a concussion, but claimed not to find a skull fracture in their x-rays. He would rest for a whole four games before coming back against Pittsburgh, and as you can probably imagine, wasn't himself, hitting .244/.313/.367 the rest of the way and then getting drafted for World War II that winter. 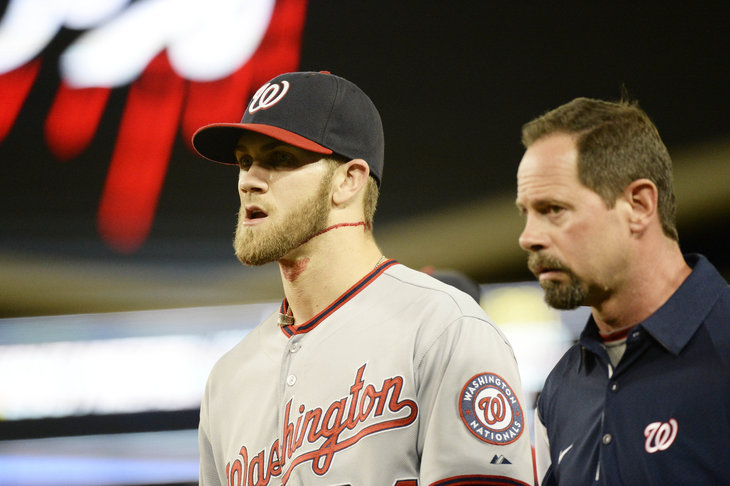 The Nationals power hitter suffered a scary collision in the outfield and left Monday's game against the Dodgers.

When he got back at 27, Reiser may have slowed down physically, but still tried to play the game at the same intensity as before. According to Goldman, one estimate had him carried off the field eleven times in his career, including once in 1947 when he was given last rights in the clubhouse before going to the hospital. He was never again more than just a part-time player.

Which is not to say that Bryce Harper is going to wind up like Pete Reiser. Player safety is light years ahead of where it was in the 1940s. There are batting helmets, and padding on the walls (well, in most places), and far greater awareness about the dangers and effects of head injuries. Moreover, with more money invested into players like Harper, and without Branch Rickey's farm system available to just plug Duke Snider in (and Leo Durocher's maniacal desire to keep Reiser on the field), the Nationals are going to be sure to act in their superstar's long-term interest. Harper is less likely to suffer a debilitating, career-altering injury now than at any time in the game's history.

But every collision at Harper's speed and size looks violent and is potentially dangerous, and any head injury could have devastating, Justin Morneau- or Brian Roberts-like effects on Harper going forward. That's part of what makes watching him so exciting, and what makes me worry that we may not have that opportunity for very long.

Nationals OF Bryce Harper crashes into wall, blames himself for loss