Now that he's one of the few owners of over 1,000 career innings, it's time to see how Kershaw stacks up against history.

With Tuesday's 8-2/3 inning performance, Clayton Kershaw vaulted himself over the 1,000 career inning mark. That's a significant marker, and not just because it's a round number. There are just 751 pitchers in Major League Baseball, dating all the way back to 1901, that have managed to reach 1,000 innings -- that's out of 7,887 pitchers, meaning Kershaw is one of the just under 10 percent to achieve the feat.

Of those 751, though, not all are at the level of Clayton Kershaw. Since the live ball era began in 1920, Kershaw's career ERA of 2.70 is the lowest of any starter with at least 1,000 career innings, coming in just ahead of Whitey Ford (2.75), Sandy Koufax (2.76), and better than Hall of Famers like Jim Palmer (2.86), Tom Seaver (2.86), Juan Marichal (2.89), and Bob Gibson (2.91). Of course, there are caveats to be had: Kershaw is in the midst of his peak years, while the careers of the above have finished in their entirety, and these figures aren't adjusted for era. Even without context, though, this is an impressive accomplishment.

Let's throw some context in, though, so it's not a hollow, misleading victory. Using ERA+, which measures a pitcher against their peers while adjusting for park, Kershaw comes in fourth, surrounded by some awfully impressive names:

Pedro Martinez remains the gold standard by which all other pitcher's should be judged for his work during the highest offense era in the history of the game. Kershaw isn't quite at that level, especially when you consider, again, Martinez's slide towards retirement is included in that eye-popping figure. He's not doing too bad for himself, though, coming in ahead of pitchers his career has intersected with in Brandon Webb, Johan Santana, and even Randy Johnson.

Speaking of Johnson, the Big Unit is the all-time leader in strikeouts per nine among starters, minimum 1,000 innings, at 10.6 per nine. Pedro comes in at second, the only other pitcher over 10, at 10.04. Kershaw rounds out the top five now that he's crossed the 1,000 inning mark at 9.3 per nine, right behind Nolan Ryan, and ahead of such luminaries as Sandy Koufax (9.28) and Oliver Perez (9.1).

Strikeouts aren't everything, you know. 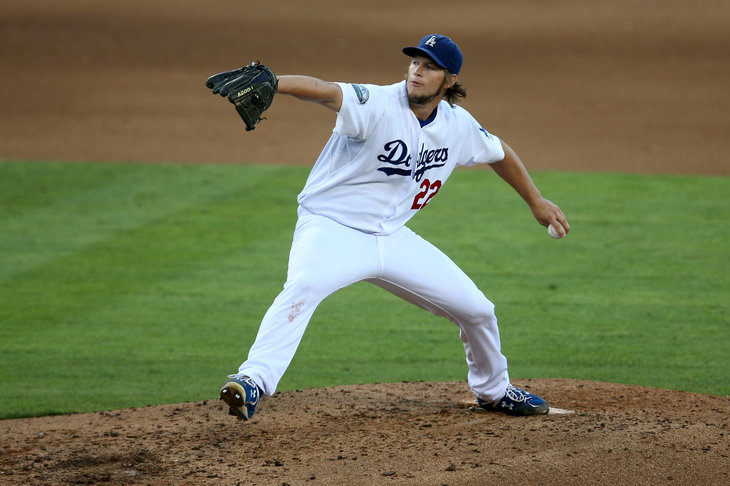 The Dodgers will re-sign Clayton Kershaw. It will be for a lot of money. You will not be surprised.

Kershaw is just 25 years old, and should have a whole lot of career left in him. Hopefully manager Don Mattingly doesn't use him for over 130 pitches, as he did on Tuesday, very often -- we'd hate to see injuries cause his career to end up like that of Brandon Webb's, with a short and glorious burst that, now at its end, seems like a waste of serious potential.

Don't take this to mean the assumption is that Kershaw is an injury waiting to happen -- at least, not more so than any other pitcher. There's something special here, though, something that should be seen to its conclusion, something that could end up as an all-time great. Those first 1,000 innings are incredibly difficult to pitch, but it's that next 1,000 that thins out the field, leaving you with history.

Thanks to Baseball-Reference's Play Index for historical research made easy.

• The Cubs, Anthony Rizzo and the Nationals plan

• The rise of the four-strikeout inning