The draft is in a matter of weeks, so it's time to get educated on the MLB pitchers to be.

With the 2013 MLB draft rapidly approaching, here is a look at pitchers likely to be drafted on the first day. We haven't forgotten about hitters, as they will follow in a separate article.

Mark Appel, RHP, Stanford University: Last year's unsigned first-round pick by the Pirates at eighth overall, Appel's decision to return to school looks wise as he's now slated to go off the board in the first couple of picks. The 6-5, 215-pounder has a mid-90s heater and has added polish to his slider and changeup, giving him top-of-the-rotation upside.

Trey Ball, LHP, New Castle HS, New Castle, Indiana: The best lefty in the draft, Ball is a super-projectable 6-6, 180-pounder but already throws in the 90s and has good command of his curveball and change-up. He's very athletic and also a prospect as an outfielder, though teams prefer him on the mound. He should come off the board in the first dozen picks.

Jonathan Gray, RHP, University of Oklahoma: Gray shot to the top of the draft boards with an outstanding spring. A 6-4, 240 pound righty, he showed improved command of a 95-100 MPH fastball along with a nasty slider and a decent change-up, pushing past Appel in the eyes of many teams for looking like a future number one starter. He should go first or second overall.

Sean Manaea, LHP, Indiana State University: This big 6-5, 235 pound southpaw broke through in the Cape Cod League last summer with an outstanding fastball. His secondary stuff can be erratic and his velocity was up-and-down this spring, but he was still considered a lock to go in the top half of the round. It is unclear how shoulder tightness that kept him out of action this past Tuesday will impact his status.

Braden Shipley, RHP, University of Nevada: Another breakout pitcher, the 6-2, 180 pound Shipley is a former shortstop who polished his mechanics this spring and throws strikes with a mid-90s fastball and a good change. His breaking ball still needs some work, but he should come off the board in the top 10 or 12 picks. 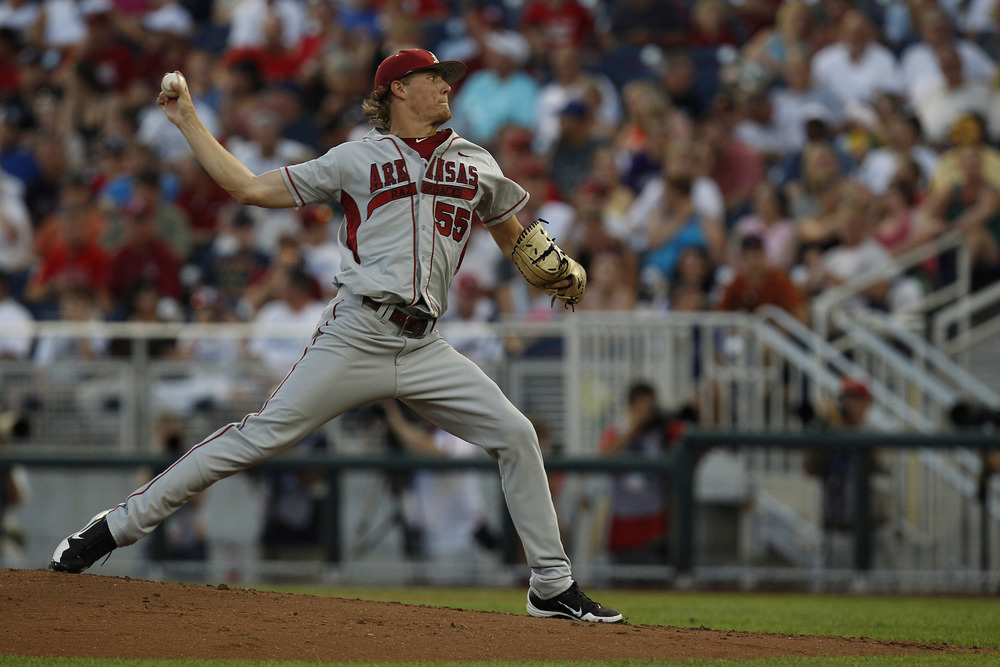 Ryne Stanek, RHP, University of Arkansas: Rated as a top five talent pre-season, Stanek has had an inconsistent spring but could still go in the top dozen on the basis of his 6-4, 190 pound build, low-to-mid-90s fastball, hard slider, and developing changeup. He could be a number two starter if all goes well, or a power reliever if it doesn't.

Kohl Stewart, RHP, St. Pius X HS, Tomball, Texas: The top high school pitcher in the class, this Texas A&M quarterback recruit is a terrific athlete with a strong 6-3, 195 pound build, a low-to-mid-90s fastball, and a promising array of secondary pitches including a curve, slider, and change. He should go in the top six picks and won't likely present a signability problem in that range.

OTHER FIRST ROUND TALENTS (alphabetical listing)

Chris Anderson, RHP, Jacksonville University: Strongly built at 6-4, 225, Anderson showed sharpened command this spring of a plus fastball/plus slider combination. His change-up has also improved, and he profiles as an inning-chewing mid-rotation starter for a team in the second half of the first round.

Phil Bickford, RHP, Oaks Christian HS, Westlake Village, California: Probably the best high school pitcher on the West Coast, Bickford's projectable 6-4 195 build already generates low-to-mid-90s fastballs. His slider and change need work but he will be on the short list for many teams in the middle and back of the first round.

Ian Clarkin, LHP, James Madison HS, San Diego, California: If Bickford isn't the best California prep pitcher, Clarkin is. Teams see him as an certain first round pick due to a low-90s fastball. He also has unusually good feel for his curveball and a promising change.

Jonathan Crawford, RHP, University of Florida: Some teams see Crawford as a reliever due to his impressive fastball/slider combination but a change-up that lags behind. Others believe he can be a mid-rotation starter with more development time. How that argument gets resolved determines if he goes in the middle of the first round or drops towards the back.

Ryan Eades, RHP, Louisiana State University: Eades isn't the same type of dominator that his predecessor as LSU's ace, Kevin Gausman. However, Eades attracts scouts with his 6-3, 200 pound body, his low-90s heat, and his greatly improved curveball and change-up. He's unlikely to last beyond the supplemental round.

Marco Gonzales, LHP, Gonzaga: A classic college-trained finesse lefty, Gonzales doesn't have ace upside but he also has a high floor thanks to outstanding command of his 88-91 MPH heater, a solid breaking ball, and a superb change-up. He's a safe choice in the back of the first round for a team in love with his makeup and polish.

Alex Gonzalez, RHP, Oral Roberts University: Quietly pushing into first round consideration, Gonzalez throws strikes with a low-90s heater, a vicious slider, and a workable curveball and change-up. His makeup is well-respected and his 6-3, 200 pound build looks strong.

We’re in the home stretch for the 2013 Major League Baseball First-Year Player Draft. Over the next three weeks, area scouts and cross-checkers will make their final reports to their front office superiors. Much video will be studied. There will be thousands of phone calls between and betwixt scouts, teams, players, and their agents/representatives. Bonus demands will be floated; signability will be sounded out. Statistics will be crunched. Medical reports will be examined. Ouija boards will be consulted; the I Ching will be divined.
Here is what every baseball fan needs to know about the upcoming draft.
WHEN: Thursday June 6 (6 PM EDT), Friday June 7 (1 PM EDT), Saturday June 8 (1 PM EDT)
WHERE: We will be providing live coverage at SB Nation and at Minor League Ball. The first day of the draft will be televised by the MLB Network.
HOW LONG: The first round, compensation rounds, and second round of the draft will be on the evening of June 6th. Rounds 3-10 will be on June 7th, Rounds 11-40 on June 8th. WHO: High school, junior college, and four-year college players from the United States, Canada, and Puerto Rico are eligible for the draft.
You can follow draft news through SB Nation’s team sites, plus these central locations:
CENTRAL HUB FOR SB NATION 2013 MLB DRAFT COVERAGE
MINOR LEAGUE BALL’S DRAFT COVERAGE
AN EARLY MOCK DRAFT
HOW TEAMS HAVE DRAFTED RECENTLY

Hunter Green, LHP, Warren East HS, Bowling Green, Kentucky: Green has classic projection build at 6-4, 180 and already throws in the low-to-mid-90s. His command and his secondary pitches need work, but a team willing to be patient could get a quality arm in the back of the first round.

Hunter Harvey, RHP, Bandys HS, Catawba, North Carolina: Son of former major leaguer Bryan Harvey, Hunter has great bloodlines and is fully committed to being a professional pitcher. He doesn't have a college plan, making him attractive to anyone worried about signability. He's a bit raw but has plenty of talent, including a 90-plus mph fastball and an erratic, if promising, breaking ball.

Connor Jones, RHP, Great Bridge HS, Chesapeake, Virginia: Unlike Harvey, Jones does present a signability risk due to his University of Virginia commitment. If he's not going to college, his athletic 6-3, 190 pound build, low-90s fastball, and solid slider will make him a candidate late in the first round.

Robert Kaminsky, LHP, St. Joseph Regional HS, Edgewood Cliffs, New Jersey: He's not big (5-11, 190) but Kaminsky has major league stuff with a 90-plus mph fastball, an excellent curveball, and unusually good polish for a cold-weather high school arm. He is committed to North Carolina but should be signable before the second round.

Matt Krook, LHP, St. Ignatius Prep HS, Hillsborough, California: Another hard-throwing lefty, Krook can get to 94-95 mph and has a classic 6-4, 195 pound pitcher build. His curve has promise, but he's rather raw and will need patient development. His upside is among the highest in the class.

Kyle Serrano, RHP, Farragut HS, Knoxville, Tennessee: Kyle's father Dave is the head coach at the University of Tennessee and Kyle will likely end up there if he's not drafted early enough. Absent that issue, his 90-94 mph fastball, advanced curveball and solid change-up would make him a very attractive pick late in the first round.

Bobby Wahl, RHP, University of Mississippi: Well-known to college baseball fans, Wahl lost some crispness off his 90-96 mph fastball, slider, and change this spring but continued to perform well statistically, and still projects as a first round or supplemental pick.

Devin Williams, RHP, Hazelwood West HS, Florissant, Missouri: Athletic and projectable at 6-3, 175, Williams is erratic with his stuff but shows the potential for three above-average pitches and has moved up draft boards this spring despite fighting cold weather early.