Getting to know the next generation of MLB hitters while they're still amateurs.

With the 2013 MLB Draft rapidly approaching, it's time to look at many of the talents who could be drafted. On Thursday, we looked in on key pitchers to know, and today we'll check out hitters likely to be drafted on the first day.

Kris Bryant, 3B, University of San Diego: The best bat in the draft, Bryant is a 6-5, 205 bruiser with outstanding right-handed power and the ability to hit the ball out of any park to all fields. He also has good pure hitting skills, controls the strike zone well, and has a chance to stick at third. Even if he moves over to first base, this is an All-Star caliber bat. He's hit more home runs this year than most college teams.

Clint Frazier, OF, Loganville HS, Loganville, Georgia: The red-haired, right-handed, 6-1, 190 pound outfielder has thrived in high school and may have even more bat speed than Bryant, although his approach to hitting (understandably) is less refined. He may wind up in left field, but his bat will certainly play there given his outstanding power potential. His makeup is considered a big plus.

Reese McGuire, C, Kentwood HS, Covington, Washington: High school catching is a strength in this draft and McGuire is the best of the lot, a 6-1, 190 pound lefty hitter with athleticism and excellent defensive skills. His hitting is considered solid and this complete package should take him off the board before the middle of the first round, perhaps even in the top five.

Austin Meadows, OF, Grayson HS, Loganville, Georgia: Often compared to high school competitor Frazier, Meadows is a lefty hitter at 6-3, 210 pounds. His across-the-board tools may be a bit stronger than Frazier's, but his bat has less zip in it and he plays with less energy. He still projects as a major-league regular and is a lock to go in the top half of the draft. 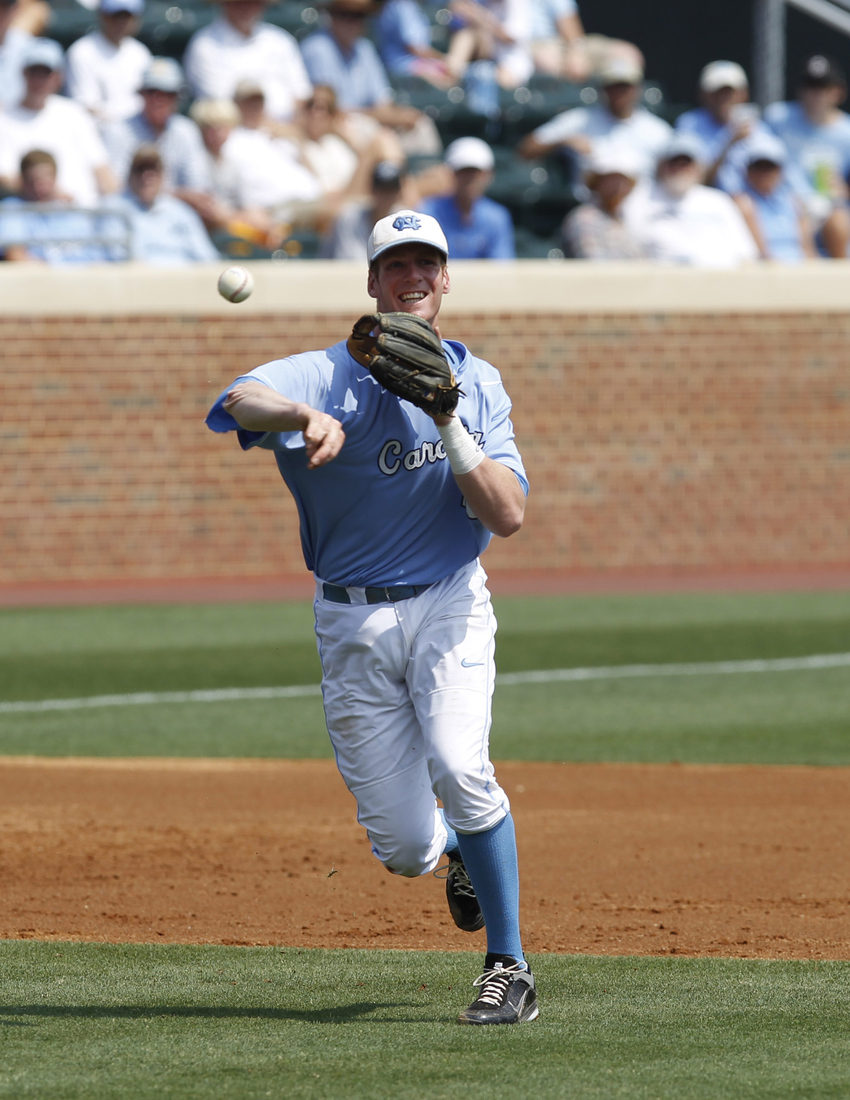 Colin Moran, 3B, University of North Carolina: Bryant's outstanding season has overshadowed the progress Moran (listed at 6-4, 180) has made in tapping into his left-handed power. The nephew of B.J. Surhoff, Moran already had impressive pure hitting skills and excellent plate discipline. His defense has improved, and there are rumors he could go first-overall to the Houston Astros.

Hunter Renfroe, OF, Mississippi State University: A burly-but-athletic type at 6-1, 215, Renfroe took a giant step forward this spring as a power hitter thanks to better plate discipline. He's a certain first-rounder at this point and could go in the top ten under certain scenarios. His strong arm would look good in right field.

Dominic Smith, 1B, Serra HS, Los Angeles, California: Smith was seen as a first-rounder pre-season due to his bat speed and strong defense and he's done nothing to change that assessment, ticketed for at least the middle of the round and perhaps sooner. He's athletic at 6-1, 200 and projects to hit for both power and average from the left side.

OTHER FIRST ROUND TALENTS (alphabetical listing)

Nick Ciuffo, C, Lexington HS, Lexington, South Carolina: Ciuffo is a 6-1, 205 left-handed hitter with solid across-the-board abilities, projecting as above-average on both offense and defense. He's an almost-certain first-rounder, and depending on what happens with other players and his own bonus demands, he could go sooner than expected.

J.P. Crawford, SS, Lakewood HS, Lakewood, California: This draft is thin in shortstops and the 6-2, 180 pound Crawford is the best of the bunch, with the arm and range necessary to remain at that position at higher levels. Questions about his hitting may keep him out of the top ten, but it is unlikely that he'll slip out of the first round completely, and positional scarcity may move him up.

We’re in the home stretch for the 2013 Major League Baseball First-Year Player Draft. Over the next three weeks, area scouts and cross-checkers will make their final reports to their front office superiors. Much video will be studied. There will be thousands of phone calls between and betwixt scouts, teams, players, and their agents/representatives. Bonus demands will be floated; signability will be sounded out. Statistics will be crunched. Medical reports will be examined. Ouija boards will be consulted; the I Ching will be divined.
Here is what every baseball fan needs to know about the upcoming draft.
WHEN: Thursday June 6 (6 PM EDT), Friday June 7 (1 PM EDT), Saturday June 8 (1 PM EDT)
WHERE: We will be providing live coverage at SB Nation and at Minor League Ball. The first day of the draft will be televised by the MLB Network.
HOW LONG: The first round, compensation rounds, and second round of the draft will be on the evening of June 6th. Rounds 3-10 will be on June 7th, Rounds 11-40 on June 8th. WHO: High school, junior college, and four-year college players from the United States, Canada, and Puerto Rico are eligible for the draft.
You can follow draft news through SB Nation’s team sites, plus these central locations:
CENTRAL HUB FOR SB NATION 2013 MLB DRAFT COVERAGE
MINOR LEAGUE BALL’S DRAFT COVERAGE
AN EARLY MOCK DRAFT
HOW TEAMS HAVE DRAFTED RECENTLY

Jonathan Denney, C, Yukon HS, Yukon, Oklahoma: This 6-2, 205 pound slugger has more mash in his bat than fellow prep backstops McGuire or Ciuffo, but Denney's defense is less refined and there's some chance he'll have to switch positions. A team that buys into his ability to improve his glovework could take him early, and he won't fall past the supplemental round.

Hunter Dozier, SS, Stephen F. Austin State University: One of the best power hitters in college baseball, Dozier has a strong arm and surprising mobility in his 6-4, 220 pound body. Scouts generally assume he'll move to third base, but his bat will still play anywhere and he seems like a lock to go before the second round.

Phil Ervin, OF, Samford University: Another talented college right-handed bat, Ervin is stocky but strong at 5-10, 205. He runs and throws well, could stick in center field, and is considered a safe bet to bring his power/speed combination forward for success in pro ball. He's a middle first round target.

Eric Jagielo, 3B, Notre Dame: Left-handed power from a 6-3, 215 pound body could get Jagielo into the first round and he won't fall far beyond it. Sharper plate discipline and defense have boosted his stock, but even teams that see him as a first baseman long-term respect his bat.

Aaron Judge, OF, Fresno State University: Judge is huge at 6-7, 255, but the right-handed hitter is quite athletic with decent speed and a strong throwing arm. Scouts worry that his wide wingspan could hamper him in pro ball, but few players in this draft offer as much raw power.

D.J. Peterson, 3B-1B, University of New Mexico: Another right-handed college power hitter, Peterson controls the strike zone well and has excellent power to all fields. His 6-1, 205 pound body lacks speed and he may have to switch positions, but his bat is expected to take him through the minors quickly.

Riley Unroe, SS, Desert Ridge HS, Mesa, Arizona: Son of former major leaguer Tim Unroe, Riley is moving up boards quickly and has gone from a third or fourth round projection to a first-round possibility. He has the tools to stick at shortstop, plus his switch-hitting bat, 6-0, 180 pound bundle of athleticism and superior makeup help him stand out.

Austin Wilson, OF, Stanford University: Like Aaron Judge at Fresno State, Wilson is a tall toolshed at 6-5, 245, with an outstanding throwing arm, good speed, and superior power potential. His college track record is erratic and will probably keep him out of the top dozen picks, but it is unlikely he'll fall past the supplemental. His tools are just too good and his problems may be fixable with pro coaching.