Sorting through the mocks to figure out who is most likely to be drafted where in the first round.

Mock drafts are popping up all over the place this month, as the Major League Baseball 2013 draft takes place starting next week on June 6. College baseball doesn't get the same exposure as college basketball or football, so for many fans, even hardcore ones, the first time they see a draft prospects name is in a mock draft.

The thing is, there are tons of draft experts, and therefore tons of thoughts on just who is going where. Oh, sure, they talk to a lot of the same folks, and therefore you get some consensus for, say, who the Yankees expect to slide all the way towards the back of the draft. But there are some major differences between lists that make it tough to know just who is most on target if you only see one or two of them.

With that in mind, we've combined the lists of five different analysts and sites together to come up with something approaching consensus, as of this morning, for a first round with ever-changing mock draft lists. Jim Callis of Baseball America, Keith Law of ESPN, SB Nation's own Minor League Ball, Jonathan Mayo of MLB.com, and Sports Illustrated's Dave Perkin had their picks thrown in a spreadsheet so we could see who this group sees as most likely to go at each spot. The results are below:

A few things. For some spots, there was no consensus at all -- all five analysts/sites chose a different player. That's where I came in, as I would go with one of the five players at each spot who had no consensus elsewhere, ensuring that there was at least someone realistic for all 33 picks of the first round. Then there are spots like first overall, where all five have Jonathan Gray, and two, where they all went with Appel. Generally, though, it was two-to-three analysts with the same player in mind for the same team. Last, we'd break this down into who said what so you could see that, but as some of these mock drafts are behind paywalls, it wouldn't be very neighborly of us to share. So, combined list it is. 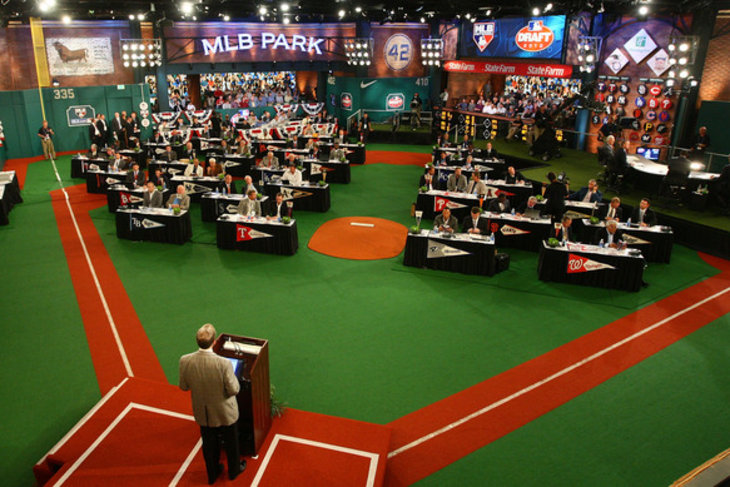 Crushing the competition and any pitcher who gets in his way, Kris Bryant is on his way to being drafted in June.

A lot could change in the next week-plus, as teams and scouts gather as much information as possible, consider signability concerns, or fallout from late-season injuries begins to reorganize things. One example of the latter we've already seen, as Sean Manaea (not listed above) was as high as fourth overall on Mayo's list, but that came out before he was scratched from a start with a new injury. In Callis' mock update, he slid Manaea all the way to 32nd -- we might see a bit more of that before draft day, so remember, this is nothing more than a collected guide of potential events.

We'll update our consensus mock again before draft day to reflect what at that time is the collective analysts' best guess. Until then, celebrate/complain about who they think your team is going to end up with as of right now.

• Are the Pirates for real?