Has April cost the Angels the playoffs again?

A poor April performance kept the Angels from the postseason in 2012, and they've started off 2013 on the same wrong foot.

Share All sharing options for: Has April cost the Angels the playoffs again?

Last year the Angels were awful in April and it cost them a postseason berth. At season's end they were four games shy of the two wild card teams. Had they gone 10-10 in their first 20 games instead of 6-14, they would have played meaningful games in October.

This year, the Angels were again awful in April, going 9-17 on the month and again falling eight games behind the American League West leader by April's end (they were eight games back on April 30, 2013 and May 1, 2012). With the A's having picked up where they left off last year, the Rangers showing no ill-effects from an underwhelming off-season, and the top teams in the AL East off to better starts than anyone expected, it's very likely that the Angels have again blown their season in the first month. The difference this year is that it seems less likely that the team will rebound to make things close the way they did last year, when they went 81-58 (.583) after April drew to a close.

For one thing, 2012 Angels were outscored by just 14 runs last April, a differential that translated to a still-poor, but not awful .420 Pythagorean winning percentage, something along the line of a 10-12 month rather than their actual 8-15. This year, the Angels were outscored by 28 runs in April, which worked out to a .389 Pythagorean winning percentage or a 10-16 record nearly as lousy as their actual performance last April.

More significantly, the Angels struggles last April were entirely due to their offense, which scored just 3.5 runs per game amid a slow start by new addition Albert Pujols (.217/.265/.304 in April) and the late arrival of Mike Trout, who wasn't called up until April 28 and collected just one hit and one walk on the month. Their pitching, however, was just fine, holding opponents to a mere 4.1 runs per game, which was actually better than the staff's performance over the remainder of the season despite the in-season additions of Zack Greinke and Ernesto Frieri. This April, however, the Angels struggled on both sides of the ball, scoring just 4.3 runs per game while allowing a whopping 5.3. Thus, where the 2012 Angels just needed the bats to come around and had a couple of blue-chippers in place likely to lead that charge, the 2013 squad needs across-the-board improvement to pull out a winning season.

There are some reasons for optimism. Jered Weaver's absence is the obvious place to start. At some point in late May, the Angels will add to their rotation a pitcher who finished in the top five in the AL Cy Young voting in each of the last three years. Their bullpen has also been hit hard by injuries, the flip side of which is that, including new addition Ryan Madson, who is coming back from a season lost to Tommy John surgery, the Angels could add four arms to their bullpen by the end of May whom they had hoped would have been there all of April (Madson, Kevin Jepsen, Mark Lowe, and lefty Sean Burnett). The Angles were also without Erick Aybar for most of April and attempted to replace him with veteran journeyman Brendan Harris, a brutal fielder who posted a .304 on-base percentage in Aybar's absence. Aybar is back, but Harris is now helping out at third base where the Angels hope to have Alberto Callaspo back from a heel injury shortly. Obviously the Angels will be a better team if they can get all seven of the above injured players healthy at the same time. 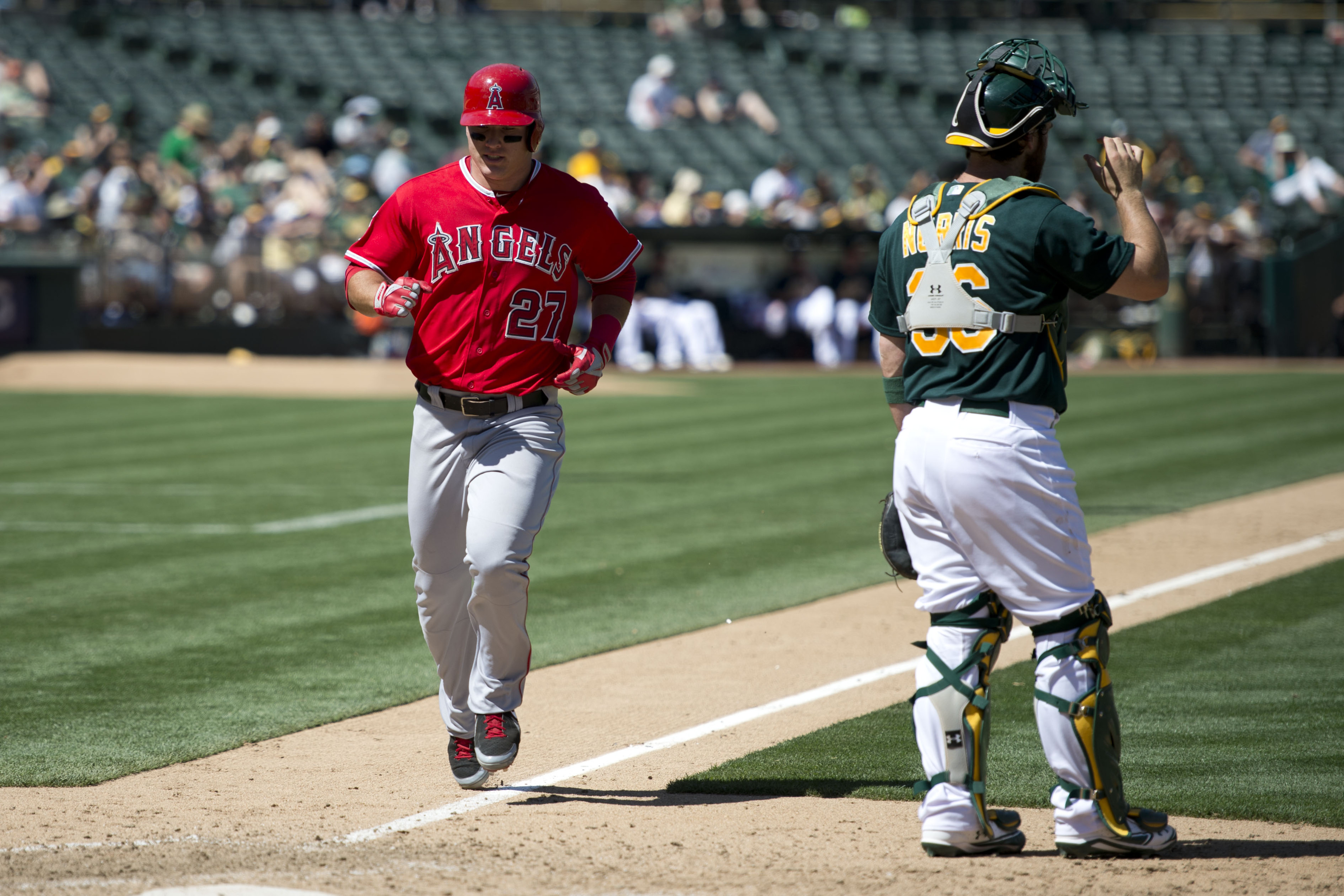 I also happen to see Josh Hamilton's brutal start as a positive for the remainder of the season, as, given his history of extremely streaky performances, any Hamilton cold snap strikes me as nothing more than a guarantee that he's going to be red hot at some point later in the season. Also, once again, Pujols, who has been struggling with plantar fasciitis in his left foot, and Trout have yet to play up to their ability this season, something that seems likely to correct itself as the season progresses.

So, the offense should come around, and the bullpen, which has posted a collective 4.47 ERA thus far, should get stronger, but this team had one rather obvious weakness coming into the season and I don't see that changing. The Angels just don't have a playoff-quality starting rotation. To this point in the season, with Weaver on the shelf for all but two starts, the Angels starters have gone 6-13 with a 5.07 ERA. C.J. Wilson, who has been just a hair shy of league average in his 40 starts for the Halos this season and last, leads the majors in walks, having issued ball four 5.6 times per nine innings. Tommy Hanson, who has also been just a hair shy of league average through his first four Angels starts, is striking out hitters at a rate comparable to the one at which Wilson is walking them. Hanson's 5.5 K/9 is still higher than the strikeout rates of the last two men in the rotation, Jason Vargas and Joe Blanton. Vargas, who has just one three-digit ERA+ in his entire career, is up to his usual random outcome routine, looking alternately impressive and incompetent with no rhyme or reason to the sequence, while Blanton needed a strong, eight-inning outing against the Orioles on Thursday night to get his season ERA below 6.00 and is now 0-5 with a 5.97 mark. Meanwhile, the team's sixth starter, Garrett Richards, has gone 1-2 with a 5.54 ERA in four starts in Weaver's stead. 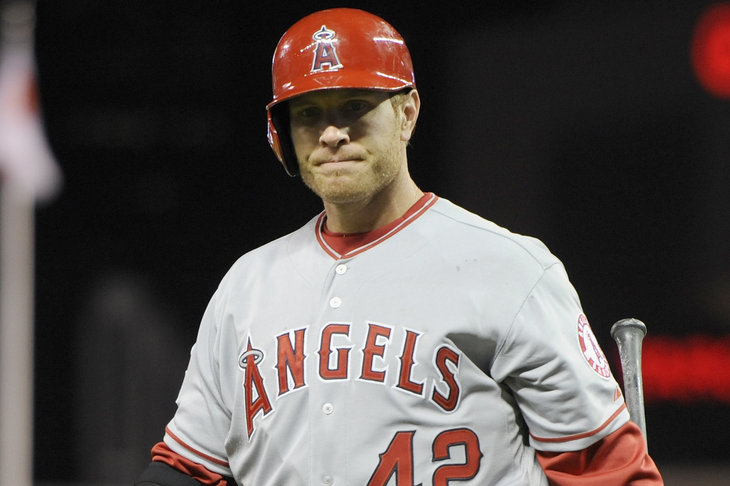 The Angels' slugger had a rough night at the plate, but his issues started well before that.

Even Weaver isn't a sure thing given that his velocity was down before he fractured his non-pitching elbow, an injury which itself occurred because he was getting smacked around in his second start and had to hit the dirt to avoid a base hit up the middle. Weaver's average fastball in his first two starts registered at barely more than 86 miles per hour per BrooksBaseball.net.

Ultimately, too much has to go right for the Angels to even contend this season, and too much has gone wrong already for even a turnaround as dramatic as last year's to get them to the postseason. If the Angels play .583 ball the rest of the way, which is what they did after April last year, they'll finish with 88 wins. Last year the Angels won 89 games and both wild card teams won 93. For the second year in a row, it appears the Angels' season was lost almost as soon as it started.

• The case for outlawing marathons

• How to think about intentional walks

• Over the Monster: Napoli's 2 ridiculous homers