MLB instant replay: State of the art for 1985

Umpires can choose between checking their calls and waiting for the latest episode of "The Honeymooners" to come on.

Share All sharing options for: MLB instant replay: State of the art for 1985

UPDATE: Craig Calcaterra has posted a retraction; the monitor pictured below was misidentified. The ancient monitor in a cage below is used by the grounds crew and not the umpires. The umpires have 19" flat-panel monitors. That still seems moderately inadequate, but hardly the subject for the ire that the image provoked.

We take it for granted that Major League Baseball needs to revise its archaic policy on instant replay. Given the ubiquity of video screens, everybody watching a baseball game has a better view than the umpires. The players and coaches in the dugouts can run into the clubhouse and review the play on television or the Internet. The fan in the stands or at home can consult his television, laptop, tablet, cell phone and, pretty soon, Google Glass. Baseball may want to preserve the "human element," but respect for the umpires is an important element of the game as well. When the umpire actually knows less about what just transpired than the entire audience, it makes it impossible to take them seriously, or to feel that the legitimacy of the game is paramount.

When we didn't know any better, fans and even hyper-critical managers like Earl Weaver could admit that while the umpires missed a few, on the whole they did a good job. Now that we can judge every aspect of an umpire's performance, from the strike zone he calls to boundary calls on possible home runs, MLB's desire to preserve human error is tantamount to insisting that you're going to commute to work on horseback. Now, thanks to Craig Calcaterra of Hardball Talk, we know that MLB has not only clung to its quaintly anachronistic viewpoint philosophically, but also technologically. According to Calcaterra, this is the monitor used by umpires to do replay review in at least one major league ballpark: 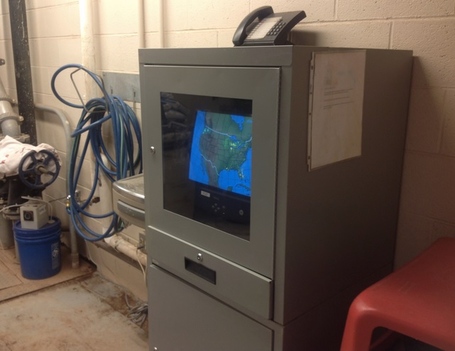 My first thought was, "That's not a monitor, it's a microwave with a map of the US pasted over the door." Calcaterra identifies the monitor as "a Dell CRT screen with no HD capability. It’s approximately 14 inches, and he concludes, "You are getting better looks at calls on your iPhone than the umps in this park are getting at replay reviews."

It's a good thing that the security folks at [whatever stadium] have made sure to lock that monitor up in what appears to be the Fort Knox of antique video technology. You can't trust those sticky-fingered umpires not to boost some state-of-the-art-for-1985 technology for their dens. I mean, who needs a 50" LCD flatscreen when you can have one of these babies? It's surprising they don't have an armed security guard on hand at all times. 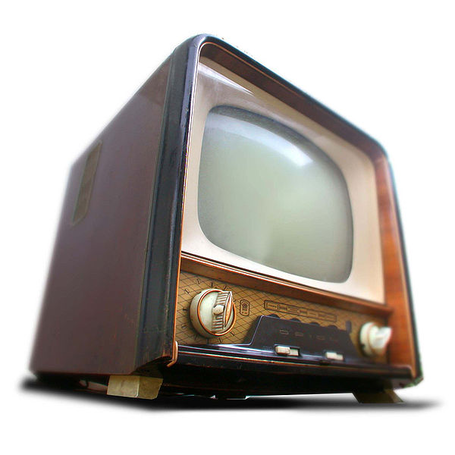 To paraphrase an old baseball saying, Milton Berle is dead; throw strikes! More seriously, here is a bona fide offer from me to Major League Baseball. I just opened up the TV section at Amazon and picked, more or less at random, what seems like a suitable TV, a 47" LCD 1080p model from LG. It is selling for approximately $500. If Major League Baseball cannot afford to replace that sad refugee from "Wall-E" above, I will gladly buy one for you. Just let me know which ballpark to send it to.

Many thanks to Craig Calcaterra for use of his illustration.