Is the Royals' start for real?

The Royals spent the off-season improving, and it's paying off early, but will it last?

Share All sharing options for: Is the Royals' start for real?

With a 10-inning victory over the White Sox on Sunday, the Royals went to 17-10 on the season. It was their fourth win in a row, and makes them 9-5 against their fellow AL Central opponents. Here at the one-sixth point of the Royals' season, their record works out to a 102-60 pace -- that would be a 30-win improvement over 2012. They've got the fourth-best record in the AL, and are 0.3 percentage points behind the heavily favored Tigers in the Central. All this, for a team that Baseball Prospectus' PECOTA system pegged to improve by just four games over their 2012 record, to 76-86, and that Vegas had just a tick better than that, at 79-83.

It's still very early, that one-sixth mark. Barry Bonds missed more of a season than that in 2003, and nonetheless hit 45 homers and was the runaway MVP. That far into last season, the Dodgers were 18-9, a 108-win pace (they ended 86-76). If the question is "how are they doing it?," there's a very large degree to which the answer is "it's early." So, a related but more interesting question: is there any reason to believe they can keep it up?

A lot of their success so far has to do with their starting pitching, specifically front-of-the-rotation starters Ervin Santana, James Shields and Jeremy Guthrie. Santana especially is a wildcard: his strikeout rate is higher and walk and home run rates are each lower than they have been since 2008, and the walk rate in particular is less than half of what it's been in any season since that 2008 season (in which he was excellent). The pitcher Santana looks like right now -- not the 2.00 ERA, but the underlying numbers, which are good for a FIP and xFIP that's still eight-tenths of a run below league average -- is a lot better than the one the Royals had any right to believe they were getting, and if he can keep the strikeouts up and walks down, that could add four or so wins to those win total projections above by itself. Most projection systems had him as around a one-win pitcher, or worse, and he's pitching like a five- or even six-win one right now. Shields and Guthrie could add another couple by continuing to be at least a little better than advertised.

The offense is another puzzle. The Royals have currently scored slightly more than the average runs per game (4.5, vs. the league's 4.4 through Saturday), which, when you've got great pitching, is probably enough. The problem, though (in addition to not really knowing how great that pitching is), is that that's going to be hard to sustain given their current production. The Royals offense that's been scoring those runs has been below average by most other measures, with a 97 team OPS+ and 96 wRC+ through Saturday that put them at 11th and 10th, respectively, in the AL. The Royals are dead last in the AL in home runs (yes, behind even the Twins) and second-to-last in walks. They'd like to see more of both, of course, but that's just kind of the character of this offense; they also have the fewest strikeouts in the AL, so they put the ball in play and hope for a lot of hits. Their .272 batting average virtually ties them with Cleveland for second in the AL.

Of the four players in the starting lineup with an above-average OPS+, three -- Alcides Escobar, Alex Gordon and Billy Butler -- are doing basically what they did last year; only Lorenzo Cain has been a particularly large improvement over the squad that finished 12th out of 14 in runs per game last season. 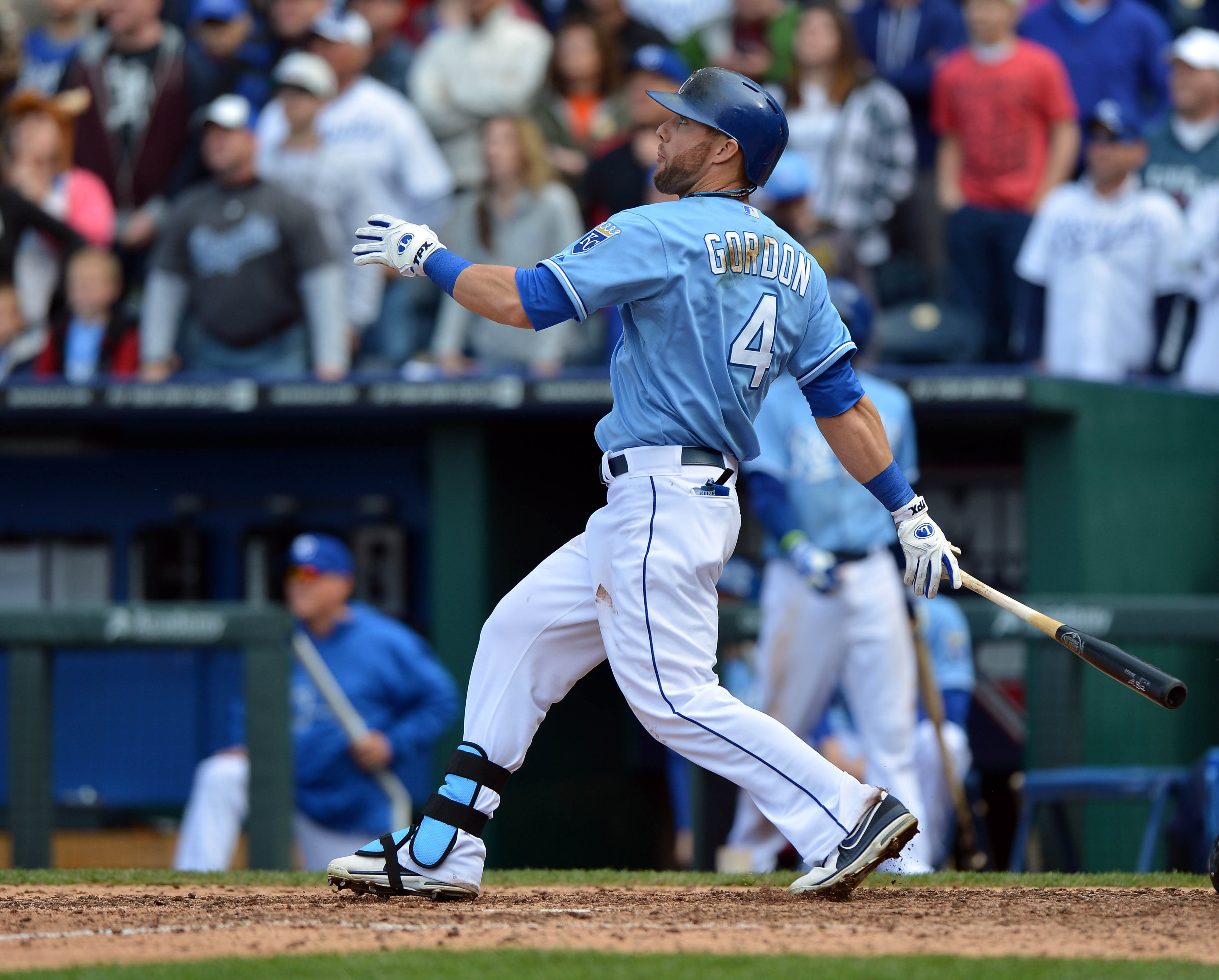 The biggest buoy so far -- and the main concern going forward -- is that the Royals' hits have been exceptionally well-timed. Through Saturday, they had just a 689 OPS with the bases empty in 2013, compared to 770 with runners on, within which is included a remarkable .321/.390/.451 line with runners in scoring position (compare to the league average with RISP of .257/.340/.403). That's what's keeping the Royals' offense afloat right now, and we know that it's not a repeatable skill. The team as a whole is not likely to keep hitting like what you might expect from a good Billy Butler season whenever there's a runner on second or third.

That's not at all to say they're doomed -- sometimes that kind of luck (well, not to that extent, but good luck) just lasts all year. But the more likely saviors are the three young hopefully-future-stars: Eric Hosmer, who entered Sunday at a 95 OPS+ against an AL average for first basemen of 117, and with no home runs; Mike Moustakas, who boasted an execrable 58 OPS+ and sat in the league's bottom 15 in most meaningful categories right now; and Salvador Perez, entering Sunday at a much more catcher-like .287/.299/.383 (85 OPS+) after starting his career with a .311/.339/.471 line (120 OPS+) in 115 games. If two of these three could start producing as the Royals expected (or hoped) they would offset a loss of some of that RISP luck. I'd say the same thing about Chris Getz (64 OPS+) and Jeff Francoeur (80), but there's no particular reason to hope that they might improve on those numbers, or that the team is willing to do the reasonable thing and replace those two, even with Johnny Giavotella and Xavier Nady tearing it up in Omaha. 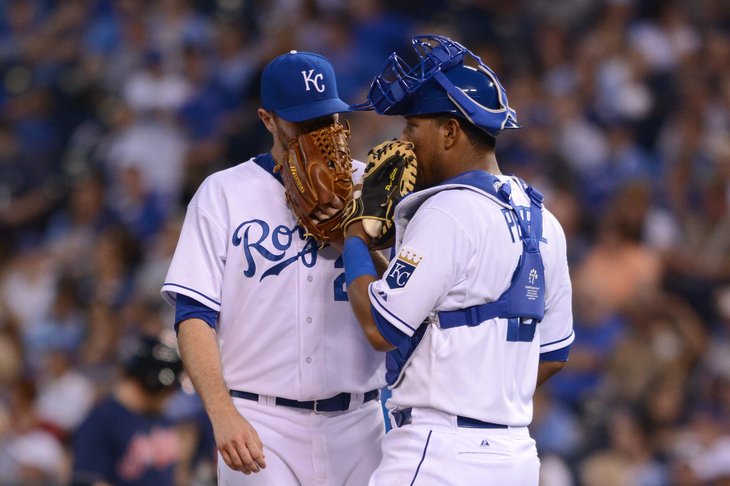 Dayton Moore may not be all-in, but maybe he should be.

It's a tall order, for a team already a half-game behind what appears on paper to be a much more talented squad, but it's not undoable. In essence, the Royals' pitching (and especially Santana, and even more especially Santana's control) needs to remain as excellent as it's been so far, and either the offense needs to continue hitting like superstars with runners in scoring position or at least two of Hosmer, Moustakas and Perez (or, ideally, any remotely capable bag of bones they could find to replace Getz and/or Francoeur) need to pick up a whole lot of slack.

The start is good enough that even playing the BPro-projected .469 ball the rest of the way leaves them at a bit over 80 wins, well within striking distance of that first winning season in their last 10 and second in their last 19, but it's too early and too possible to give up hope for more than that. It could happen!

• Has April cost the Angels the playoffs again?

• The Rotation: Summer movies vs. baseball

• The sabermetrics of Little League