Getting good results from one out of two Upton brothers still leaves the Braves with a problem.

On Monday night, the Atlanta Braves beat the Reds 7-4. Center fielder and leadoff man B.J. Upton didn't help, at least on offense, going 0-4 with a walk and four strikeouts. This was pretty much par for the course for Upton, whose rates dropped to .148/.231/.269. Signed to a five-year, $75.25 million free-agent contract in November, Upton's OPS+ of 36 ranks as the third-worst in the majors among qualified batters:

Upton is on a pace for 84 hits, 16 home runs, 57 walks, 209 strikeouts, and 16 stolen bases in 32 attempts. Barring an unrevealed injury or emotional disturbance, this isn't anything like Upton's true level of ability, but it's still going to be hard for him to rebound strongly enough to finish the season with the kind of line the Braves might have envisioned when they signed him. Given his current rate of 3.7 at-bats per game, if Upton hits .301 from now until the end of the season while playing every day, he would finish with a batting average of .273.

Then again, .273 would represent Upton's highest mark since 2008. Average isn't anything -- OBP is king -- but it's symbolic of one of the stranger careers of our time. Upton was the second-overall pick in the 2002 draft (following the immortal Bryan Bullington, selected by the Pirates) and made the majors as a teenager. Initially a shortstop, he seemed to have all the tools to be a latter-day Barry Larkin, but though the Rays kept him in the infield far past the point that players with comparable defensive problems had been moved, he never could get his error rates to a manageable level at short, second, or third base.

Finally moved to center field during the 2007 season, he seemed poised to burst into the first rank of players with a .300/.386/.508 season that included 24 home runs, 22 stolen base, and 65 walks in 129 games. That campaign rapidly proved to be an outlier. Upton dropped to .273/.386/.401 in 2008. He stole a career-high 44 bases (against 16 caught stealing) and walked 97 times, a total he hasn't come close to matching, but his home runs dropped to nine. Part of that was attributable to playing through a torn labrum in his non-throwing shoulder, although he somehow recovered his power stroke in time to go on a postseason rampage, hitting seven round-trippers in 46 at-bats in the first two rounds. 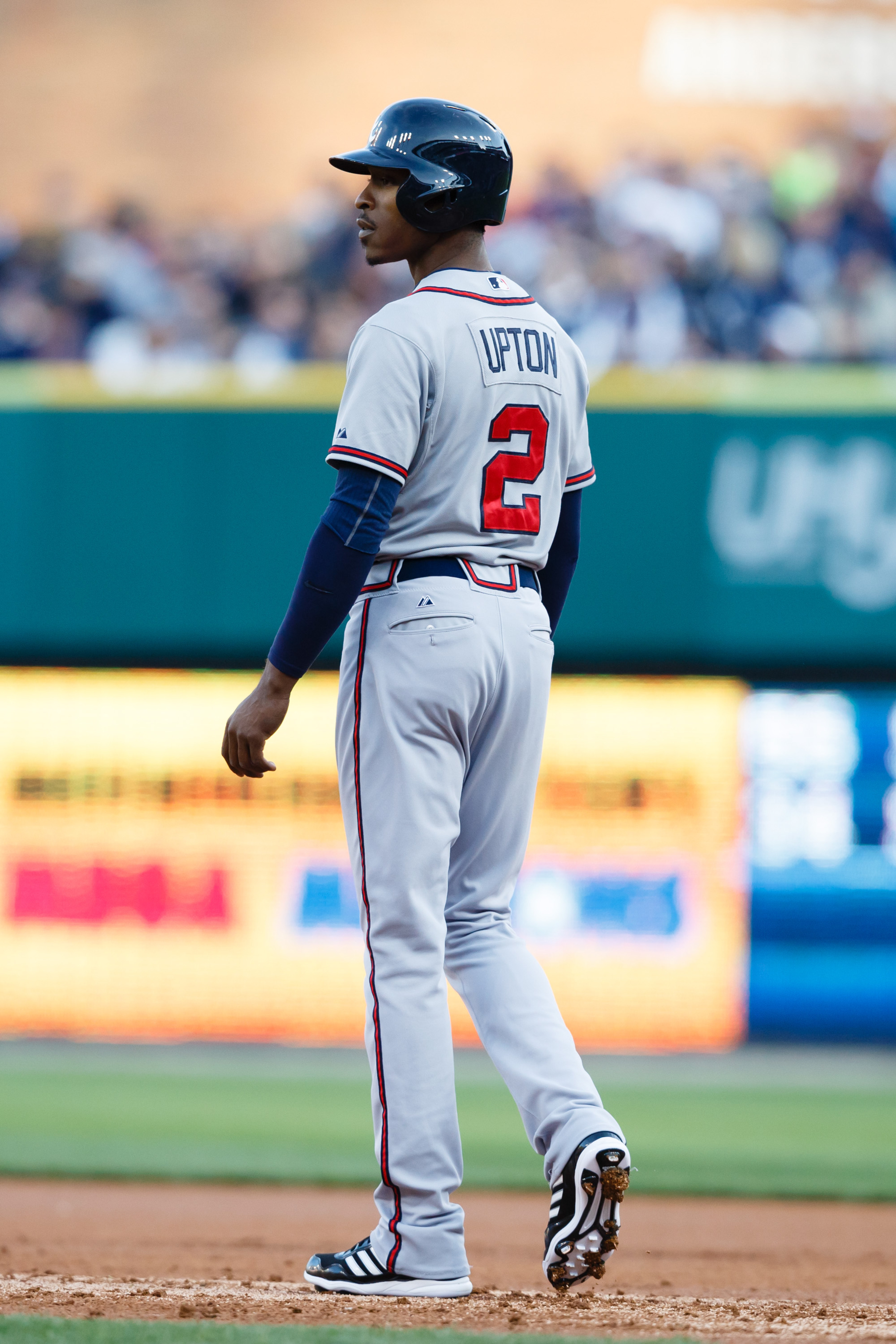 If that "somehow" sounds as if it's questioning Upton's play to that point, it's intentional. While it's a mistake to assume players can turn it on and off at will, Upton has periodically been cited for indifference on defense and lack of hustle. Because his career since his 2007 has been made up of peaks and valleys, it's difficult for an outside observer -- outside B.J.'s head, that is, which is everybody -- to discern whether his inconsistency is the product of a player who, for whatever reason, has trouble maintaining his approach (Adam Jones comes to mind as an example of a player who alternates torrid stretches with periods in which, if you were seeing him for the first time, you would never guess he was an all-star-level performer), or someone who just isn't into it sometimes.

Did the new Upton carry over into 2012? Heck no. The start of his season was delayed by a sore back, and maybe that explains another year when the player turned it on late. Hitting .244/.305/.372 at the end of July, Upton suddenly began hitting balls over buildings, smashing 19 home runs in his final 229 at-bats.

His rates for those last two months tell another story, that of a player losing control of the strike zone. He hit .249/.288/.576, walking 13 times in 247 plate appearances while striking out 68 times. On the season, Upton swung at 52 percent of all pitches he saw. It was the fourth consecutive season that number had risen, and it placed him in the top 10 for the American League. It's not necessarily damning that Upton found himself there -- Josh Hamilton, Adam Jones, Chris Davis, and Justin Morneau were there as well -- but his increasing aggression undoubtedly played a part in his posting a career-low .298 on-base percentage. His was the 14th-lowest OBP among qualified major leaguers, and most of those in the picture with him were not those you think about getting multi-year deals worth approximately $15 million a season. 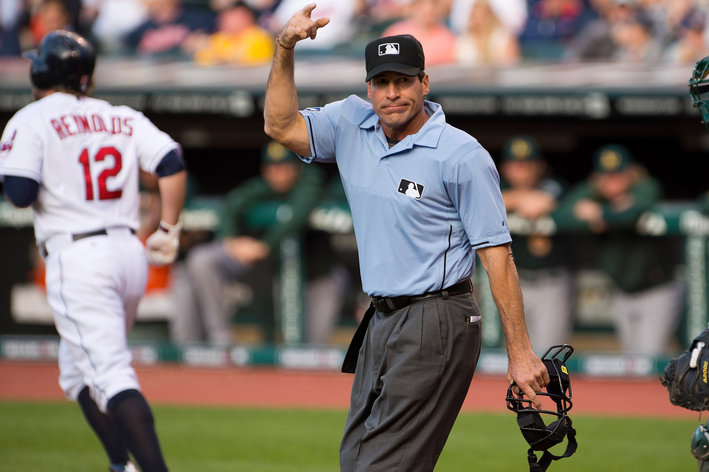 Robot umps could be dangerous, but their human counterparts are already on the rise.

It must be painful for B.J. to watch his little brother Justin lead the universe in home runs when he has been so very, very bad this season -- he's at risk of turning into the Tommie Aaron of the modern Braves, or more aptly the Joe Niekro, Jim Perry, or Ken Griffey Sr. of the family, a player who was plenty good at times, perhaps even excellent, but will always be historical appendages to their more successful relatives.

Where Upton goes from here is anyone's guess -- he's certainly shown himself capable of making a 180 and bashing his way out of a slump before, but the uncertainty that will properly surround him not just for the remainder of this year but throughout the rest of his contract suggests the risks attendant in free agency, particularly at a time when teams seem so determined not to let players they actually want test the free agent market to begin with. Given that, it might be reasonable to regard most players who actually reach free agency as tainted -- their teams, with access to all the player's information and the direct experience of living with him, have decided they'd be better off parting company. In other words, the Rays weren't just being budget conscious in letting Upton depart, they were making what they thought was the best call for the organization.

The foregoing isn't a novel conception of free agency. Studies have shown that players who reach free agency and change teams tend to decline faster than those that are re-signed -- in other words, the team that knew the player best decided to get out while the getting was good. As the first table above attests, Upton isn't the only veteran player to start the year ice cold, and it is unlikely that he or most of the players listed will still be there at the end of the year. Still, the Braves now have to face the possibility that they chose poorly in addressing the departure of Michael Bourn by signing Upton. A player with a sub-.300 OBP doesn't leave a lot of margin for error, but right now they'd probably be happy if Upton reached base often enough to reach that level.

• World Series of the Week: Diamondbacks at Dodgers

• A Treatsie on Booing: When is it OK?