Time is not an arrow, but a snake. Ballplayers are as vulnerable as they ever were, and so are we.

Share All sharing options for: J.A. Happ, Ray Chapman, and a killing tide of liquid sugar

Often it seems that time is not an arrow, steadily progressing in a straight line away from a distant starting point, but rather a snake coiled in an endless series of S-like curves, so that our stories exist in parallel to some seemingly strange and distant time that is, upon closer examination, much like our own. We stage ancient plays in modern dress and tell ourselves the experience is new.

Last night, when Desmond Jennings hit the almost-literal bullet that sent pitcher J.A. Happ to the hospital, the ball caromed of his head with such force that it went into foul territory down the right field line and Jennings was able to run to third base. When Carl Mays threw the pitch that ultimately killed Ray Chapman, the ball bounced back to him with such force that the pitcher thought he had heard the crack of the bat rather than the crack of Chapman's skull, and he threw over to first base to complete the play.

Ray Chapman and Carl Mays would seem to belong to another age, when players wore flannel uniforms and no helmets, gloves were smaller and bats heavier, and they only played during the day. And yet, as Happ's injury shows, all it takes is a bad break to drag us right back to a point in time when mortal risk is a part of the game. We can be thankful that Happ seems to have gotten off relatively lightly given the frightening visuals of last night -- the Blue Jays report he suffered a head contusion and a laceration to his left ear and should be released later today -- but the incident still serves as a reminder that life is uncertain and our survival at any given moment is a question of an inch to the left, an inch to the right, or a bullseye. That was true in 1920 and it's true today.

The incident I'm about to relate is bizarre and funny at first. Then you realize that people died. This happened about a year and a half B.C. -- Before Chapman. From Ann Hagedorn's Savage Peace: Hope and Fear in America, 1919:

On January 15, some Bostonians heard a loud, muffled roar shortly after noon coming from the direction of the waterfront near Commercial Street. Next they felt the ground beneath them trembling. Windows shattered; horses screamed; the sky darkened. A wave of molasses twenty-five feet high and 160 feet wide was moving through the streets of Boston's industrial north at thirty-five miles per hour, crushing autos, trains, trestles, horses, dogs, rats, and every man, woman, and child who could not outrun its unstoppable assault. Sucking its victims into the smothering folds of its sticky mass, the molasses slammed up against buildings, crashed through alleys and rolled into Boston harbor.

A distillery's giant vat of fermenting molasses had exploded, releasing 2.3 million tons of sticky goo. Twenty-one people died and a further 150 were hospitalized. The government identified the cause as negligence; the distillery blamed terrorists. 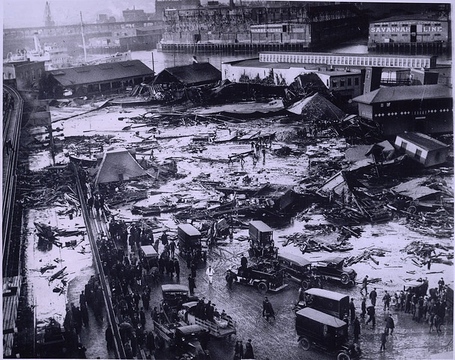 Terrorists in 1919? Surely that year belonged to the time before 9/11, when we weren't preoccupied with death in the streets. Actually, it was a major problem; we're just forgetful. Bombs were going off all across America at that time. That June, in Washington, someone blew himself to pieces on Attorney General A. Mitchell Palmer's doorstep -- he had intended to blow up Palmer, but he apparently tripped and fell into his own bomb, setting it off. That night, seven other bombs went off at roughly the same moment in Cleveland; Boston; New York City; Philadelphia; Pittsburgh; Newtonville, Massachusetts; and Patterson, New Jersey. It was a coordinated wave of terrorism. No perpetrator or group of perpetrators was ever conclusively identified; the government's official conclusion was that the Palmer assassination attempt was made by a lone bomber -- despite the body parts recovered from the bomb site including two left legs.

We're self-conscious voyeurs: we can see 1919 and 1920, but they can't see us, one of those unfair rules of time's serpent that works in our favor, but only if we're aware enough to know we should be looking. Baseball has mandated helmets for hitters and coaches, but not for pitchers -- the cumbersome hardhats would have seemed to be a non-starter given a pitcher's need to move freely on the mound. Last winter, in the aftermath of Brandon McCarthy's skull fracture, Major League Baseball evaluated Kevlar lining for pitchers' caps. In November, Dan Halem, MLB's senior vice-president of labor relations, said that "We're at the early stages of our investigation," and "We have to make sure we find the right product and test the product. This can't happen at the snap of a finger. We have to make sure we do it right."

By December, test caps were issued to "a dozen big league pitchers." The padding of Kevlar and a rubber-like polymer weighed 4.3 ounces and were an eighth of an inch thick. According to the manufacturer, Unequal Technologies Co., "three months before the McCarthy incident, New Era, the official cap maker of Major League Baseball, contacted Unequal about providing padded linings for pitchers' caps." In February, Halem told ESPN that baseball was not satisfied with the prototypes it had received and had asked for changes to be implemented. 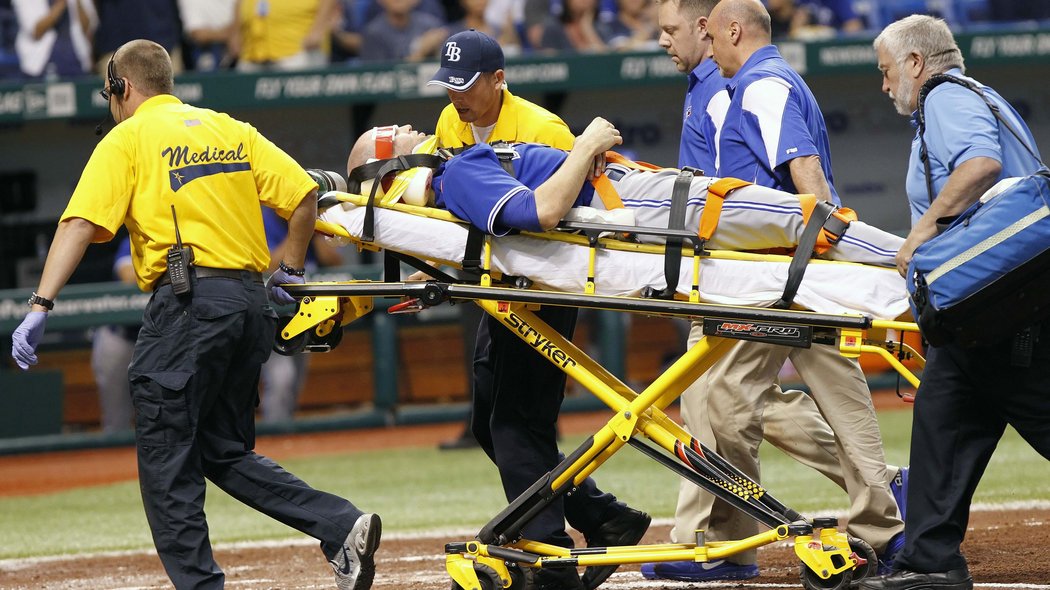 Blue Jays starting pitcher J.A. Happ was taken to the hospital after getting hit in the head with a line drive and is doing well, according to the team.

Pitchers' headgear wouldn't completely insulate a pitcher from harm, just as a batting helmet does not completely protect a hitter from injury if he's hit by a pitched ball. In both cases, only some of the head is protected and the face is exposed, and of course no armor can absorb the full impact of a projectile. Still, some protection, even if it is inadequate, incomplete, and uncomfortable, might be better than none -- if one McCarthy, Happ, or Bryce Florie is saved while the process of R&D continues, it will have been worth it.

No rush though; these things don't happen that often, right? As for Ray Chapman, strange explosions in Boston, and both baseball and going to the grocery store as possible sources of mortality, they belong to then, not now -- as Lou Reed sang in "Sweet Jane," "You know, those were different times." They don't apply now because, well, just because. We're smarter and carry advanced computers in our pockets, and that makes us invulnerable and immortal.

Sadly, that's not the truth at all. Nearly a hundred years later, a bomb is still a bomb, a baseball is still a hardened projectile, a skull is still a skull, and we excel at fixing the barn door after the horse has been taken to the hospital. Wave hello to your fellow citizens of 1920 with their funny hats and crooked teeth -- any lack of resemblance is purely cosmetic.

Best wishes to J.A. Happ for a speedy recovery and return to the mound.

• World Series of the Week: Diamondbacks at Dodgers

• A Treatsie on Booing: When is it OK?