Gerrit Cole brought his upper-90s fastball to PNC Park for the first time, and he did not disappoint.

Pittsburgh Pirates pitching phenom Gerrit Cole won his MLB debut Tuesday, and for the most part was very effective in an 8-2 victory over the Giants.

In 6-1/3 innings at PNC Park, Cole allowed two earned runs and seven hits, while striking out two batters and walking none.

The 2011 first-overall pick in the MLB draft, Cole has wowed with his upper-90s fastball and wipeout slider. Despite his electric stuff, he only fanned a pair of batters against the Giants in his debut. 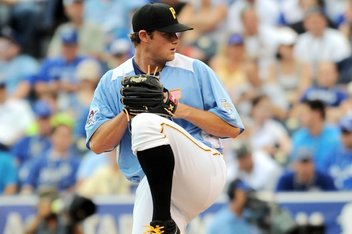 If so, he might be just what the Bucs need to make 2013 different than the last 20 years

The most encouraging part of the outing is the fact that he did not walk a batter all night, since that is a concern with almost all young pitchers. With the pure stuff Cole possesses, he will not have any issues getting batters to swing-and-miss. If he can locate, he could be a true top-of-the-rotation force.

Cole threw 81 pitches, 59 of which were for strikes. He had 19 first-pitch strikes in 27 batters.

With more young talent on the way, Pirates fans have to be excited to see the crown jewel of their minor league system pitch so well. Jameson Taillon, another Pirates pitching prospect, could follow soon. For the surprisingly-good Pirates, Cole could provide them with the boost they need to finally get over the hump and into the postseason.

• Fantasy baseball: The fun is in the worrying

• What should the Braves do with their rotation?