Would Skip Bayless still care about Tim Tebow if he didn't play football? We'll never know, but we could have.

Tim Tebow gets an awful lot of press as an NFL quarterback -- someone had to fill the void of ESPN's Brett Favre obsession, you know -- but that's not because he's pro. No, Tebow also found plenty of attention back in his amateur days, too, when he was a football player for Florida. Even before college, though, Tebow was a multi-sport athlete, one that could have played baseball instead of the sport he's known for.

The Patriots recently signed Tebow as a free agent, leading WEEI's Red Sox beat writer Rob Bradford to strike up a discussion with a current Red Sox' scout about Tebow -- apparently, the Angels were looking to draft him:

Kotchman, a Red Sox Florida area scout (who previously worked in the Angels organization and has been inducted into the Professional Baseball Scouts Hall of Fame), has his own memories when it comes to Tim Tebow, and they have little to do with football.

"We wanted to draft him," Kotchman remembered, "but he never sent back his information card. Either it never got to him, or ... It's Tim Tebow. Who knows if it got to him, and if it did we just never got it back. Otherwise were [sic] were going to take him."

Tebow apparently had all the tools to make him a legitimate baseball prospect -- after all, this is a hall of fame baseball scout still talking about Tebow's baseball skills years after the fact -- had he been interested in going that route:

As a high school junior, the left fielder hit .494 with four home runs while leading his team to the final four of the state playoffs. He didn't play as a senior, instead enrolling at Florida during the spring in an effort to jump-start his football career.

"He had a strong arm and had a lot of power. If he would have been there his senior year he definitely would have had a good chance to be drafted," said Red Sox Florida scout Stephen Hargett, who worked with Kotchman with the Angels. "He had leverage to his swing. He had some natural loft. He had some good power. He was a good athlete. He had had enough arm for that position. He was a left-handed hitter with strength and some size.

It's not just members of the Red Sox front office who thought Tebow had a chance, either. His high school baseball coach, Greg Mullins, called Tebow a "six-tool" player, saying he had all of the regular tools scouts look for, but was also a huge -- you guessed it -- character guy. Mullins says that Tebow "just had a bigger fire for football," and that explains why he didn't bother to send the information card back. 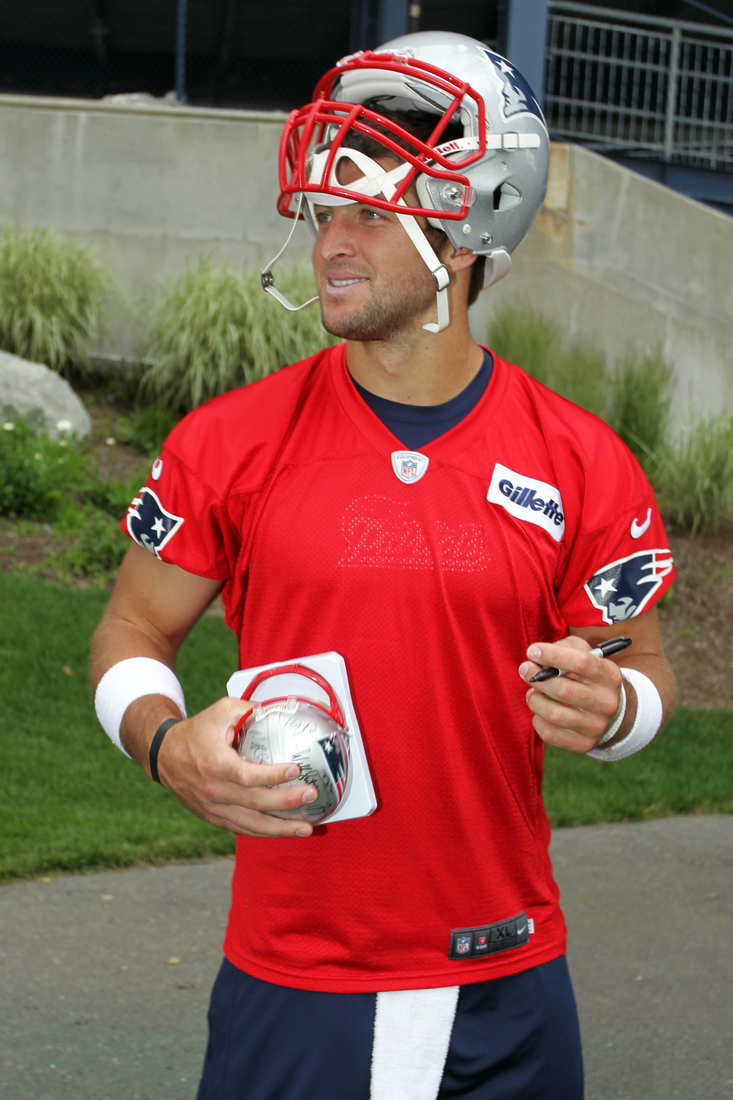 Even with all of the surrounding noise, the Patriots move to sign Tim Tebow is pretty smart, SB Nation's Dan Rubenstein says.

Tebow had power, as he launched a ball over the 365 foot fence in right field in batting practice one day that then cleared a softball field fence even further back -- the official distance was 489 feet. It's just batting practice, but it's also just high school, and the ball wasn't coming in with the kind of force that a big-league offering would, either: Tebow generated that power himself, which shouldn't be surprising since he dwarfed your typical high school junior in size. He's still got it in batting practice, too, as he demonstrated back in 2010 when he hit 12 of 15 pitches for homers while hiding out in Memphis to work out away from the spotlight of Broncos' mini-camp.

Would Tebow have been any good on a professional baseball diamond? Plenty of raw athletes with plus tools have been unable to translate any of that into actual production, but teams keep drafting that kind of player for a reason: when they hit, they hit big. Tebow at least sounds like he would have been a well-rounded baseballer, and if he had been as good as his coaches and scouts say he could have been, it's, at the least, fun to take a moment to think about he and Mike Trout patrolling the same outfield.

We'll never know for sure, though, not unless Tebow flames out with the Patriots and sees his NFL career abruptly end, forcing him to the sport he avoided years ago. That's unlikely, but hey, he's still just 25: there's time for a career course correction, especially if he truly had the level of talent coaches and scouts have assigned him.