Is Yasiel Puig's MLB start the best ever?

Yasiel Puig's first couple of weeks in the majors have been impressive, to the point where we need to ask if they're the best in history.

Share All sharing options for: Is Yasiel Puig's MLB start the best ever?

The Dodgers lost to the Pirates on Sunday, 6-3, their sixth loss in their last eight games. The lone bright spot, as he's been so often lately, was rookie Yasiel Puig, who went 3-for-4 (all singles) with his first career stolen base and a run scored.

There's no readily available way to answer this question, yet; there's nowhere I can go, as far as I can tell, that will permit me to enter a number of games (13) or plate appearances (say 50, the precise number Puig has right now, which is the kind of thing it'd actually make some intuitive sense to study) and call up the best performances by any measure (OPS, OPS+, wRC+, etc.) through that precise number of career games or plate appearances.

What we do have, though, is the Baseball-Reference Play Index, and specifically the Game Finder, which permits me to (among many other things) call up lists of the players who had individual games matching certain criteria most often. For instance, this is the list of the players who had the most multi-hit games among their first 13. Puig's Sunday gives him 8, which puts him in a 12-way tie for second-most all time, behind only Curtis Goodwin's 10. 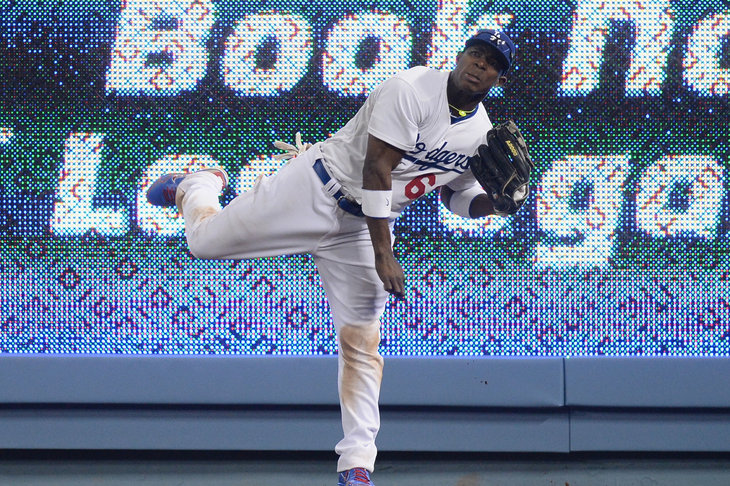 The Cuban rookie made an impact in his major-league debut, gunning down a runner with a cannon shot.

Goodwin had a phenomenally interesting start to his career in 1995, but he certainly wasn't better than Puig. He actually had two or more hits in 10 of his first 11 games, and had already entered a mini-slump by the time he hit game 13. But Goodwin was a classic slap hitter with basically no other skills, and his start was just kind of an amplified version of what he would become: he hit .440/.472/.480 in his first 13 games, with 20 singles, two doubles, two walks and a hit by pitch. If it's possible to hit an "empty .440," that's what Goodwin did.

In fact, what's most striking about that list of 47 players might be how non-notable the list is; none of them quite did what Puig has done, but they all did brilliantly (and some of them came very close), and yet very few had even moderately successful major league careers. Hall of Famers Joe DiMaggio and Kirby Puckett appear on the list, as does Phil Rizzuto (who wasn't much of a hitter), and a few other good players (Terry Pendleton, Ken Griffey Sr., Gus Bell), but most are utterly unmemorable, guys you'll know only if they're active or recent (Delmon Young, Jamey Carroll), and one -- Julio Cruz -- who is among the worst hitters ever to hold down a regular job. So that doesn't help nail down who had the best first 13 games, but it does drive home the point that a great first two weeks isn't a particularly reliable indication that you've got a great (or even good, or average) hitter on your hands.

The list of players who reached base at least twice the most often in their first 13 games, or hit at least one home run the most, or the most games with at least one hit (I also ran the search for three or more hits and for two or more home runs, but I won't bore you with those), each give about the same result: the top of each list is filled with players, most but not all of whom ultimately proved to be marginal players or worse, whose careers started very, very well, but not as well as Puig's has.

There's one arguable exception, and if you're a fan of the Dodgers or Puig, you're not going to like it much. One guy at the top of the "at least one home run" list hit .351/.429/.946 in his first 13 career games. The batting average and thus OBP (and it doesn't feel right to give Puig credit for both; he's walked only once, and that was intentional, so essentially his batting average is his OBP) were considerably lower than Puig's, but that slugging percentage -- driven by six home runs and four doubles -- gave him an OPS more than 100 points higher. 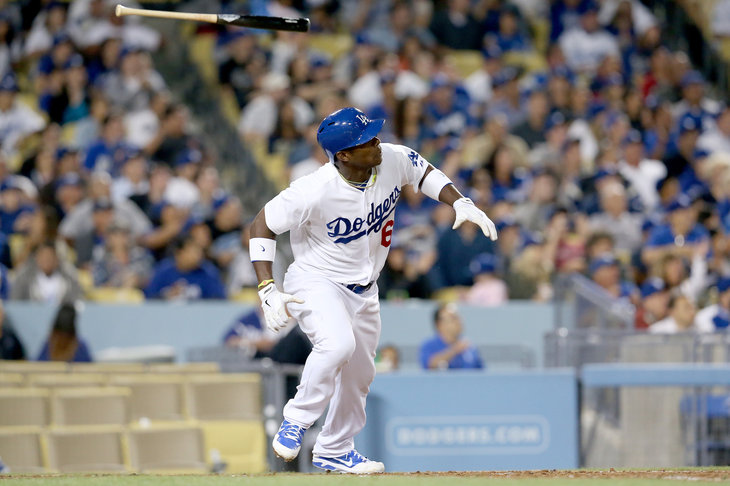 Puig is the fourth Dodger with a multi-homer game in 2013, joining Mark Ellis, Carl Crawford, and Scott Van Slyke.

The year was 2008, and the player was Taylor Teagarden, then a top-100 prospect, who holds a career .202/.266/.384 line and is now the backup catcher for the team that may need one least, having gone 1-for-23 in eight 2013 games filling in for Matt Wieters. Puig was probably still better: he's had 13 more plate appearances in his first 13 games, and the 128 points of batting average and 71 points of OBP Puig has on him are probably more impressive than Teagarden's nearly 200 points of slugging percentage.

This isn't definitive, as there are a number of ways that a better performance could have skipped my notice, but it seems likely that, at least since the start of Baseball Reference's game log records in 1916, Puig has in fact had the hottest start to his career, at this exact arbitrary point, of any hitter. This start, impressive as it's looked, still hasn't done anything to tell us whether Puig is a DiMaggio or a Drew, or a Teagarden or a Horn or a Lansing or a Wilson, or anything in between. Nonetheless, it seems we've seen something that we've never quite seen before, so just keep on watching while you can.

• MLB trade rumors: Who's buying and who's selling?