The decision to temporarily reassign a top prospect to the outfield is unnecessarily controversial.

Share All sharing options for: Ron Washington and the Jurickson Profar decision tree

While some teams are scraping the bottom of the barrel to field a full lineup nightly, the Rangers have an enviable quandary on their hands: They have too many healthy and productive infielders and nowhere to put them all.

Despite Wednesday's loss to the AL West-leading A's, the Rangers sit just two games out of first place in the loss column. Though they scored eight runs in Monday's win, they struggled to find their bats against the Toronto Blue Jays this weekend, scoring just four runs in as many games, and they were held to just two runs on Tuesday. One key to the Rangers' success going forward will be keeping all of their best hitters in the lineup nightly, and since they have such a surplus of infielders, that led manager Ron Washington make an unconventional decision: Rotate rookie Jurickson Profar through multiple positions on the field, including the outfield, a position he's never played before.

Profar, who is regarded as one of baseball's top prospects, came up as a shortstop. However in mid-May, with second baseman Ian Kinsler on his way to the disabled list with a rib injury, Profar was used as his replacement. He did well there, and has also played games at shortstop and third to give Elvis Andrus and Adrian Beltre off days. In 22 games this season, Profar has met expectations offensively. He's hit .270/.327/.382, which is enough to warrant keeping him in the majors. There's still some maturing that he will have to do as a hitter -- he might slug more, and his walk rate is currently below league average -- but the 20-year-old has a chance to be a star and doesn't have much else to prove in the minors. Defensively, there's little question that Profar can adjust quickly to playing left field, but there is some concern about asking someone without much experience in the majors to play out of position. The biggest criticism of the decision, however, is that the Rangers are squandering his talent by stashing him in an unfamiliar position when they could trade him instead.

While it's certainly controversial, the decision to find ways to utilize Profar makes a lot of sense for the immediate future given that the Rangers are stacked with talent on the infield yet struggling in the outfield and need a short-term stopgap. To fully appreciate Washington's decision, it's important to look at the talent that the Rangers have on their current roster. To easily digest this information, I've created this flow chart for your perusal. 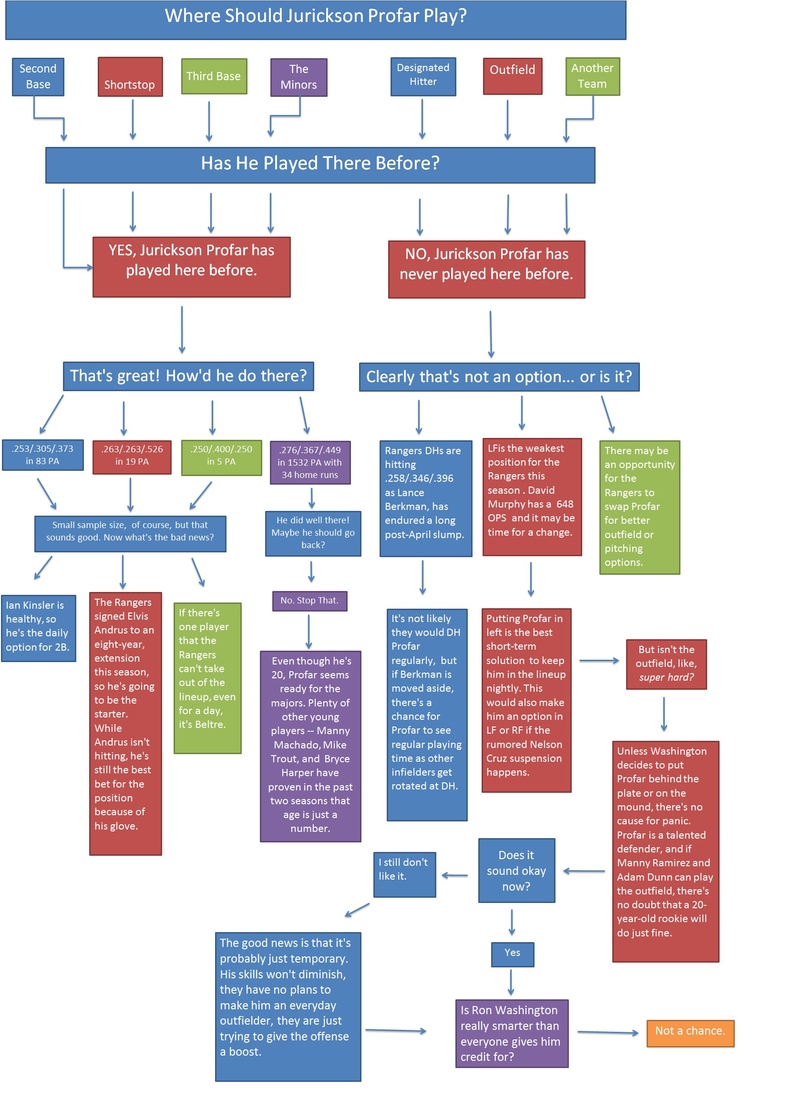 As they have going back to 2011, the Rangers have relied on Mitch Moreland at first, Kinsler at second, Andrus at shortstop, and Beltre at third. Moreland has flourished in his second season as the regular first baseman and his 135 OPS+ is the best on the team. Moreland has played right field in the past, 38 games in his major league career, but moving him back there to accommodate Profar would require a lot of shuffling -- Nelson Cruz to left field, Kinsler to first, and Profar to second-- a move Washington seems understandably reluctant to make mid-season.

At second, Profar was a fantastic temporary replacement for Kinsler, but now that the three-time All-Star has returned, there's simply no reason for Washington to replace him with Profar... yet. Kinsler has been successful at the plate this season when healthy; he's hitting .294/.365/.475 with seven home runs this season. Moving Kinsler to first base to make room for Profar at second is probably the easiest long-term solution, but for now, unless he suffers a setback from injury, Kinsler will be the everyday option at second for the rest of the season.

Profar's natural position is shortstop, but the Rangers opted to sign Elvis Andrus to an eight-year, $120 million extension this year, blocking Profar from the spot. That doesn't mean they don't see a future for Profar, it just means that it won't be at short. As with the other infield positions, Washington trusts the daily duties his veteran Andrus. Andrus has struggled at the plate this season, especially against lefties (hitting just .203/.273/.228), but given his defensive skills and track record, he'll be allowed to play through his funk rather than riding it out on the bench. There are some questions about whether or not Profar could play third base everyday, but just like the rest of the infield, he's blocked there, too. Adrian Beltre has been incredible since joining the Rangers in 2011, hitting .309/.348/.552 with 82 home runs in his tenure, has played his usual brand of strong defense along the way, and he shows no signs of slowing down.

Washington has never been one to tinker with his rosters, especially where veterans are concerned. He's the guy who let Michael Young bat fifth for far too long in 2012, and seemed to be part of an overly deferential lobby when it came time to move the veteran infielder across the diamond. Yet, with Profar, Washington has really stepped outside of his comfort zone. He's told veterans that when he wants to start Profar in their place, they are going to have to deal with it. Clearly he recognizes that the infield is strong, the outfield is exceptionally weak, and that Profar could be a quick patch.

Given that he's new to the outfield, the Rangers will likely use Profar in left field exclusively, which has been the weakest spot in the Rangers' lineup, averaging just .234/.295/.441 this season. Those weak numbers are actually inflated by Jeff Baker, who hit an unsustainable .419/.486/1.000 with five home runs in just 35 plate appearances as a left fielder this season. Baker won't play like Superman the rest of the season, however, and he's out with a thumb injury following a high-five incident (you can't make this stuff up). 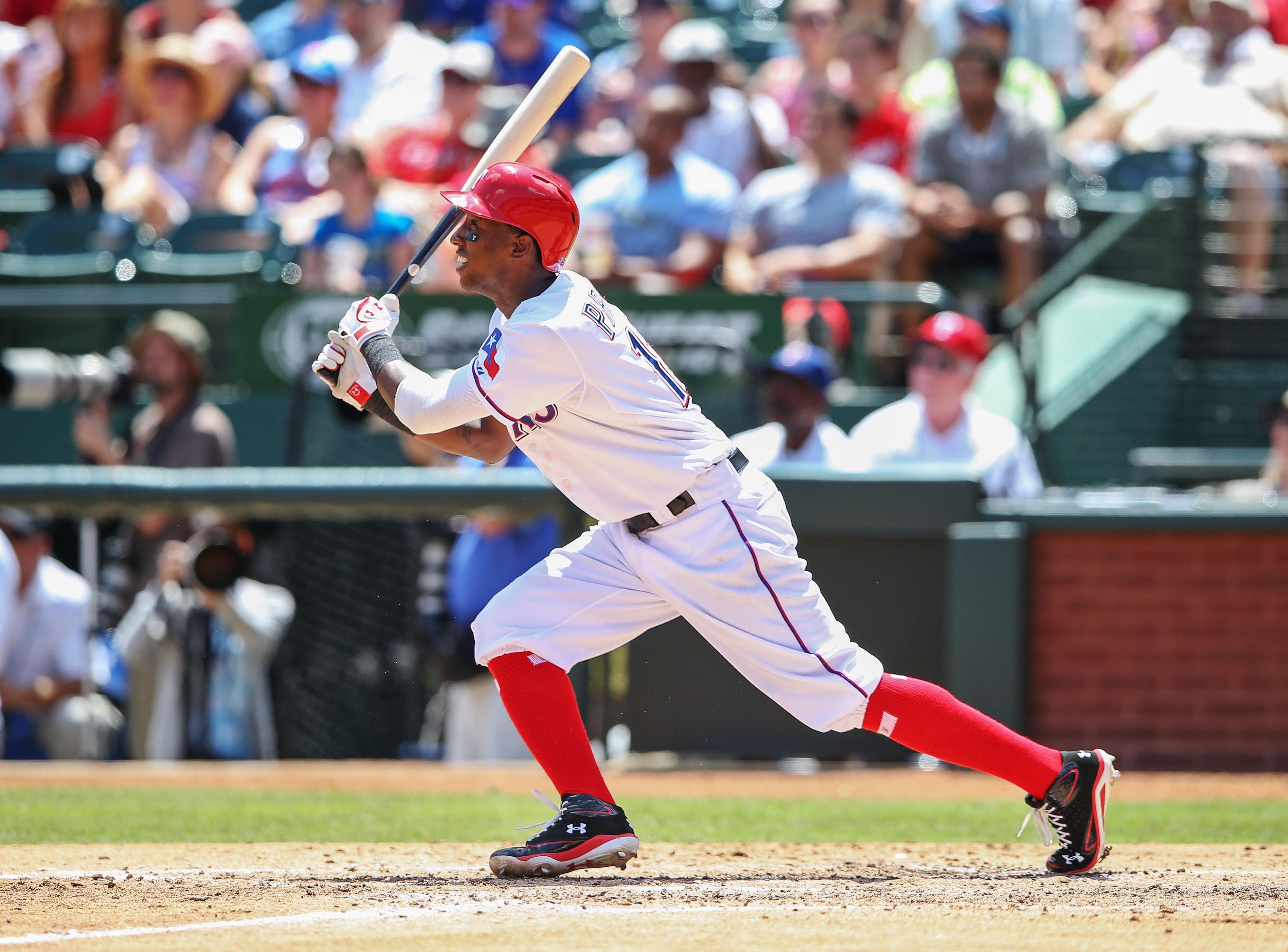 The minor league options are scant, so the best remaining choice is David Murphy, who has been a better pitcher than hitter this year. Murphy has generally been a useful platoon player for the Rangers, with career .284/.351/.476 rates against right-handed pitching. Although he's coming off of a career-best .304/.380/.479 season last year, Murphy's .209/.268/.372 this year makes moving Profar to the outfield a no-brainer, even if it does involve the risk of playing a player out of position for part of the season (thought that has seemed to work okay for other players throughout history like Honus Wagner, Graig Nettles, Tony Phillips, Pete Rose, and Buddy Bell).

The easiest solution seems the least explored for the Rangers, however. Instead of playing Profar out of position, they could rotate infielders through the designated hitter position to make room for Profar. It would be unusual to use Profar there exclusively given his youth and defensive abilities, but the Rangers could use the position as a resting spot for infielders, especially if Lance Berkman continues to struggle. Berkman, who had offseason knee surgery, has hit a wall offensively and it's hard to know whether the 37-year-old is just slumping or finished. The Rangers' designated hitters have been about average as far as the league goes, but they are 12th in home runs. Berkman started the season hot, hitting .319/.449/.486 in April, but he's had a huge drop-off, hitting .233/.321/.336 since then. While Washington has a habit of deferring to veterans, it's misguided to play Twister with the rest of his players just to keep a struggling 37-year-old in the lineup nightly.

Still, the Rangers are fortunate to have so many suitable options to fill in their lineup card nightly, something that will undoubtedly help make them contenders for the rest of the season. While Washington has never been known for his innovative ideas, his willingness to tinker this season to make the offense stronger is commendable (even if he asks his players to bunt too often). The long-term possibilities for Profar are wide open, but the short-term call, though it might be unpopular, has to be in favor of immediate gains -- one of the few Washingtonian philosophies worth getting behind.

• Gehrig, Gleason, and a timeless case of stupidity

• Is Yasiel Puig's MLB start the best ever?