Numbers ending in 000 only have as much meaning as we give them.

Share All sharing options for: David Wright's assault on history

After Tuesday's games, Mets third baseman David Wright's career hits totaled precisely 1,500, putting him halfway to the magic 3,000. Entering the season, Bill James gave Wright a 12-percent chance to reach that total. On Thursday, he followed up with a 3-for-4, two-home runs game. Now hitting .304 on the season, he's on a pace for his fourth season of 180 or more hits, his first such since 2008. Should he maintain or increase that output, his chances of achieving the milestone will only increase.

For players who have a plausible case for the Hall of Fame, achieving big, round numbers is important because it saves the voters from having to undertake the laborious work of thinking. At 3,000 hits, a player is an all-time great. At 2,999, we have to work a little bit. That these qualifiers are completely arbitrary is often lost in the process.

For longtime followers of the Mets, the idea that the best all-around hitter in franchise history (you can debate that title, but that's the subject of another post) might be a third baseman no doubt comes with a palpable sense of irony given how difficult the Mets found the position to fill in the early going, running through roughly 80 players at the hot corner in the team's first 25 years. Prior to Howard Johnson's arrival and eventual emergence as a 30-30 hitter in the mid-1980s, the team had had only two players, Wayne Garrett and Hubie Brooks, play as many as 500 games at third. The rest of the top 10 was made of players ranging from Ed "The Glider" Charles and a past-it Ken Boyer to Lenny Randle, Joe Foy, and Joe Torre. Subsequent to Hojo, the quality of Mets third basemen improved, with players like Edgardo Alfonzo and Robin Ventura taking turns there, but even the good players were short-lived, and Wright is already the team's career leader in games played at third base.

Wright is the team's career leader in hits as well, having passed Ed Kranepool earlier this season. We should remember, though, that amassing a large pile of hits does not necessarily make a hitter great -- sometimes high career hit totals connote longevity more than productivity. The back end of Pete Rose and Craig Biggio's careers provide ample evidence of that. Further back, there are careers such as Doc Cramer. The great irony of Cramer's career was that as a ballhawking center fielder he was known as "Flit," the name of an insecticide made popular by a series of Dr. Seuss ads, but Cramer didn't so much kill insects as hit like one, averaging .296 at a time when high averages were common while rarely walking or hitting for power. With 2,705 career hits, Cramer ranks in the all-time top-100, but his 87 career OPS+ and 8.7 career wins above replacement suggest just how hollow that total is.

There is nothing hollow about Wright, who does everything well. He hits for average, power, walks 80 times a season, and steals bases at a good percentage, generally in poor hitting environments. The reason the comparison with players like Cramer is instructive is that 3,000 (or 2,705) is just a number -- Wright is an excellent player regardless of whether he gets a large hit total or not. In fact, given how poorly third basemen are represented in the Hall of Fame, he's arguably close to being qualified even if his productive years ended as soon as next year and he just coasted the rest of the way through his 30s. 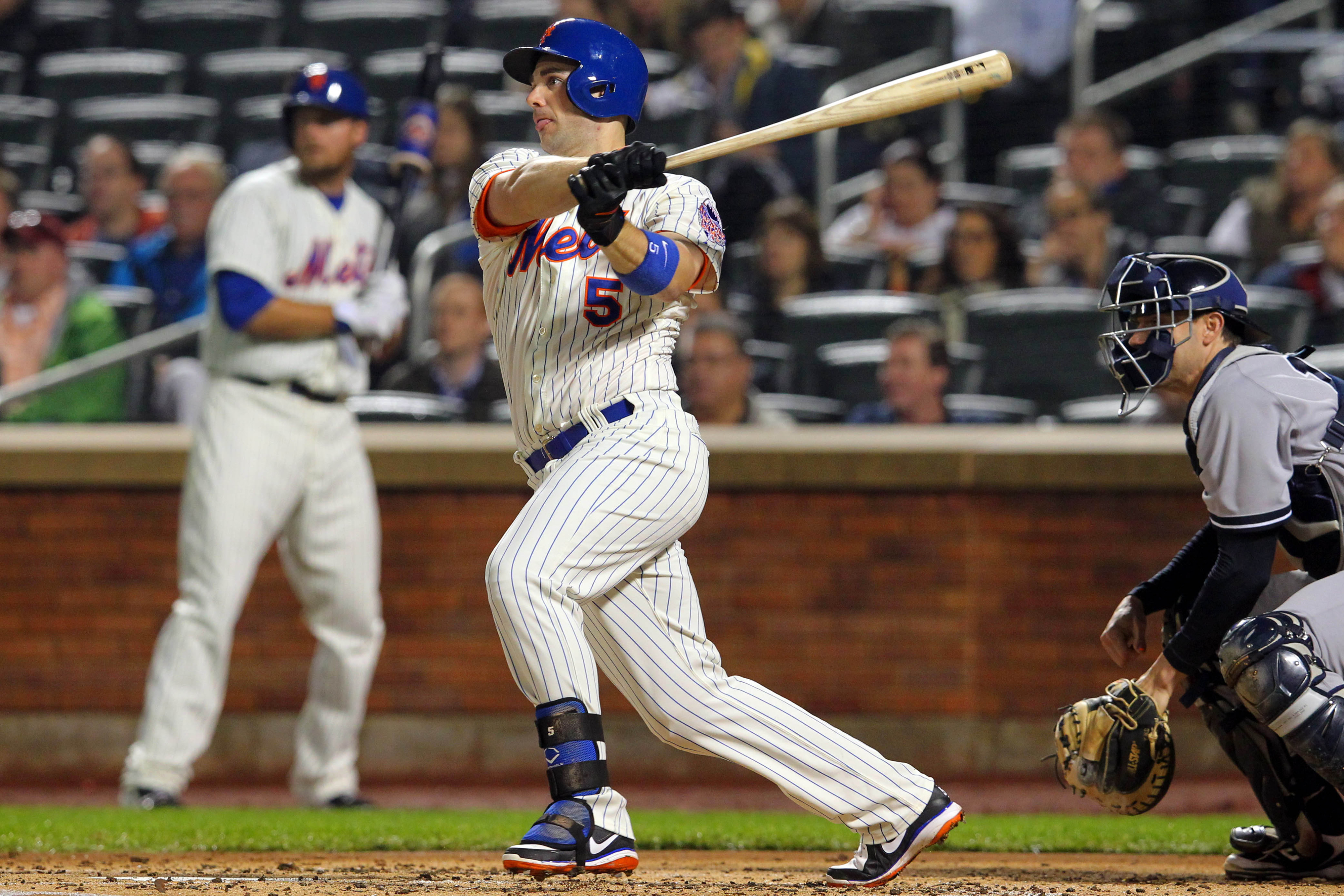 I realize wins above replacement is a frustrating stat for some, but in discussions of career value across time it's a useful benchmark. With 44.5 career WAR, Wright is already in the top 25 for third basemen. By the time Wright is eligible for enshrinement, Chipper Jones, fifth all-time, should have long since been added, and Adrian Beltre, presently 10th on the WAR list and who very well might get to 3,000 hits himself, seems like a good bet to get in well. But the real test for Wright may be Scott Rolen. Due to injuries, Rolen's career was heavily front-loaded. By the time he was Wright's age, he had accomplished a good deal of what he was going to do in his career. If you pause him at age 30, we can see that Wright is a bit ahead of Rolen in some significant categories.

During the span covered here, Rolen won the Rookie of the Year award, won six Gold Gloves, and made four appearances in the All-Star Game. Wright has two Gold Gloves and made six All-Star teams, with a seventh presumably in the offing. 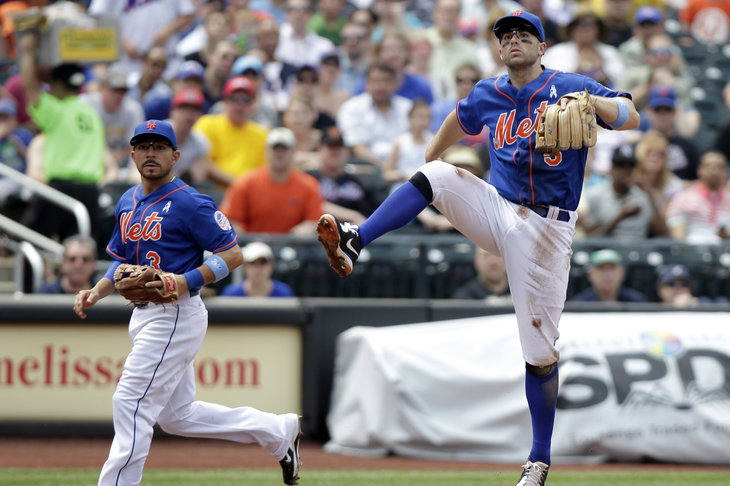 The Mets just could not throw the ball where it needed to go in the fifth inning on Sunday.

After his 30th birthday, Rolen still had a few good seasons, but he was done having those .290-30-100 seasons that tend to signify as Hall of Fame/MVP-type campaigns. Nonetheless, he is still -- or should be -- a very strong candidate for Cooperstown. No, he doesn't have any of those aforementioned round numbers on the back of his baseball card. He finished with 2,077 hits, 316 home runs, and a .281 batting average. Yet, as measured by WAR, which tracks both a player's offensive and defensive contributions in one handy number, he had the eighth-highest career value of any third baseman. If the voters bounce him as quickly as they did, say, Lou Whitaker, who is the second-base version of Rolen (sixth-highest career value of anyone at the keystone but a .276/.363/.426 career hitter with less than 2,400 career hits), then Wright is likely going to have to keep putting up big numbers well into his 30s if he wants a plaque.

Rolen's résumé is spiked by two World Series appearances and one win. Wright's is... not. His first and only postseason team thus far came in 2006. It's an old story, the great player wasting his best years on teams unworthy of his talents, but having signed a contract that will keep him in Mets togs through 2020, it seems like he's cast his lot with Sandy Alderson's slow-to-evolve rebuild. Let's hope that when the time comes, voters don't punish him for the organization's failings, because when all is said and done, we're looking at one of the best third basemen in history. That fact shouldn't get lost due to some misplaced fealty to numbers that end in "000."