Things mostly went as expected in the first round of the 2013 MLB draft. Mostly.

The order might have been a bit different than expected, but just who was picked in the first round of the 2013 MLB draft was, for the most part, not a surprise. Jonathan Gray had been the consensus #1 pick for much of the last month plus, but instead, it was Stanford senior Mark Appel whom the Astros took first overall -- many scouts feel he was the best pitcher in the draft due to his higher floor and ace potential, so the Astros very well might have made the right decision.

Appel going first shook things up a little bit, in the sense that Kris Bryant ended up going second to the Cubs, rather than the aforementioned Gray, and poor Gray ended up drafted by the Rockies: poor gray, because that means his future likely takes place in Coors Field. You don't wish that on your greatest baseball-playing enemy if their job is on the mound. 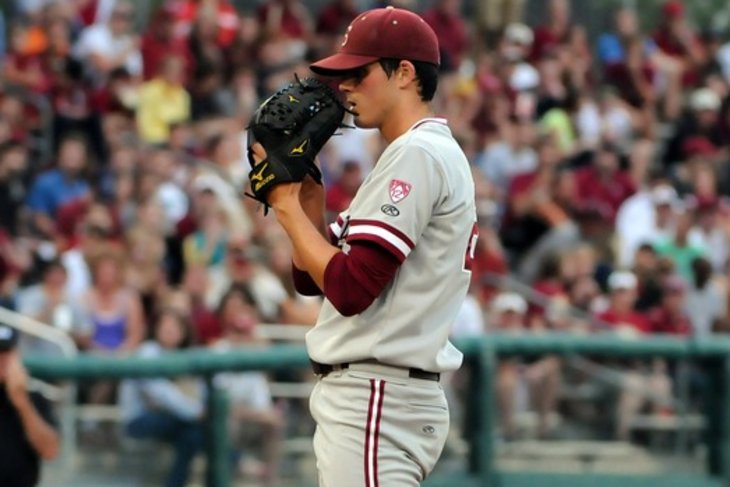 Results, scouting reports, and more from the first two rounds of the 2013 MLB draft.

After that, though, things for the most part went close to plan. High school righty Kohl Stewart went to the Twins at #4, where he's been pegged for much of the season. The Indians ended up shifting gears from Colin Moran, and instead took Clint Frazier, a high school outfielder who had mostly been connected to the Red Sox in the last few weeks. When the Marlins took Moran at #6, Boston audibled and went with a pitcher they've been in contact with for weeks, projectable high school lefty Trey Ball. Another Georgian high school outfielder, Austin Meadows, then fell to the Pirates with the ninth pick, the one they received as compensation for failure to sign the same Appel one year ago. The Blue Jays closed out the top-10 with Phil Bickford, who shot up mock draft charts in the final week before the actual draft.

This whole portion of the first round represented just how close much of this talent was perceived to be. Besides Appel, Gray, Bryant, and maybe Stewart, too, a group that stuck out among the rest and deserved to go 1-4, there wasn't much consensus over just who should go when or next. That's part of the reason this draft class was considered weak -- a lack of standouts made everything seem kind of samey, but when the thing they all are is talented, it's hard to complain too much -- everyone had a chance to get a player full of potential early on, even after missing out on one of the big boys.

That's what makes the Royals pick at #8 the oddball in the top-10. Kansas City selected shortstop Hunter Dozier at #8, a player who, according to ESPN, no scouts expect to stick at short long-term. Baseball America ranked him #39 in their pre-draft top-500, and while he sounds like a pretty solid player...

Dozier carries a lot of strength in his 6-foot-4, 220-pound frame, and the righty slugger has exceptional power to the opposite field. He could hit 20-25 homers annually in the big leagues. Dozier also moves well for his size and may be able to stay at shortstop for a while, though he'll lack the quickness to play there in the big leagues. He has close to average speed and moves well enough to be an asset at third base and possibly at second. His arm isn't in question, as he showed a 91-93 mph fastball in relief appearances a year ago.

...the fact he won't stick at short makes this a bit odd. Even if he is an asset at second base, picking someone who might end up playing there at the #8 spot in a draft still loaded with talent seems off: second basemen are often the result of having nowhere else to play due to some deficiency or another in a player's game, and that's why you don't see many picked in the early part of the draft. 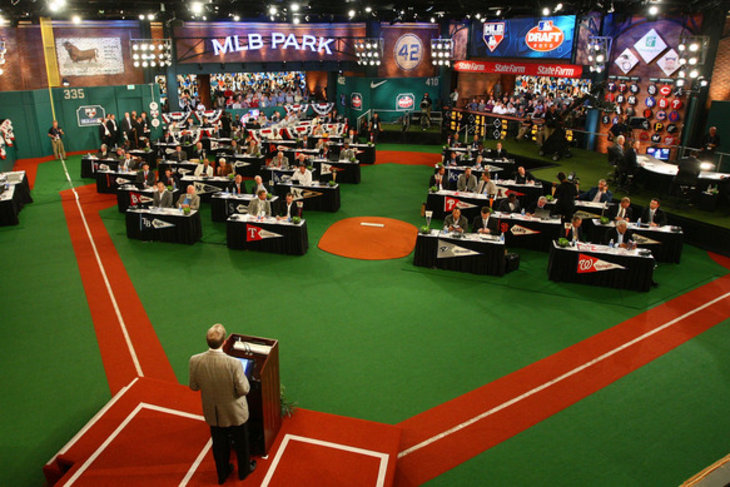 Your guide to the rules and more of the 2013 MLB draft.

Of course, Dozier will continue to play at short for a while, so he's not really at the keystone yet. Plus, if he moves to third, then it's a different story. When you combine where he was ranked prior to the draft with what was left available, and slap a dash of the Royals' track record for developing young hitters to that mix, it's understandably hard to be understanding.

They did make more sense of it later when they ended up with pitcher Sean Manaea with the first pick of the competitive-balance sandwich round. Manaea came into the draft as a top-10 arm but slid due to injury concerns and a tough spring, so the Royals found themselves someone with a lot of potential a little later to help balance things out, and one they can afford since they can sign Dozier for well under slot. Still, it was a bit risky -- what if Manaea had been picked towards the back of the first round? Even if he hadn't, what if he does end up injured, as he's shown signs of being this spring, most recently when he dealt with shoulder tightness? There are a lot of ifs here that make it difficult to let them entirely off the hook, but at least, after getting Manaea, you could see what the Royals' intention was.

• MLB draft has few surprises in first round

• How the MLB draft works

• Bois: The fall of the "Beef Animal"