Feldman is the most important piece of the deal for the O's, as he gives the club a steady arm at the back of their rotation -- something they've been looking for since at least last fall. Signed by Chicago to a one-year, $7 million deal over the winter, the 30-year-old right-hander posted career-best numbers in his half season with the Cubs. Feldman owns a 3.46 earned-run average and 2.68 strikeout-to-walk ratio in 91 innings over 15 starts for Chicago. 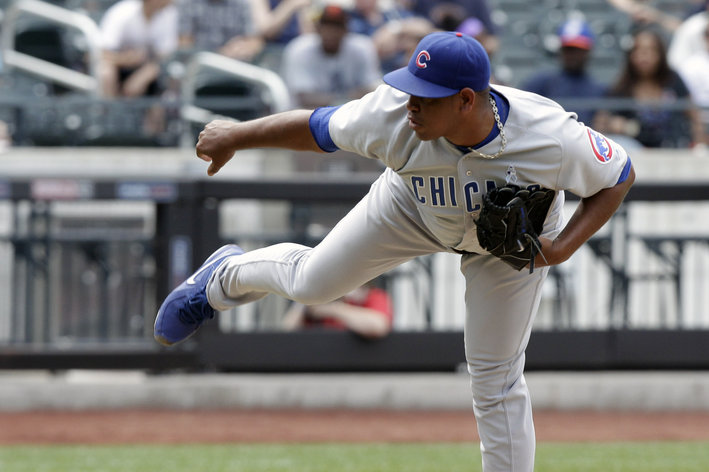 ESPN Chicago reports that the frustrating ex-closer could be on his way to the West Coast.

Feldman's career ERA is a full run higher than he's posted this season, but if he can maintain some semblance of his early-season success, he should be a huge upgrade over Freddy Garcia -- who the O's have relied on for much of the last three months.

Joining Feldman in Baltimore is the versatile Steve Clevenger, who recently found himself on the trading block after a disagreement with the Cubs about his medical situation. Per Chris Cotillo of MLB Daily Dish, the 27-year-old recently asked for a second opinion on his left oblique strain after he was activated from the 60-day DL, and was put on the trading block as a result.

A catcher and corner infielder, Clevenger is a career .199/.262/.275 hitter with one home run in 229 big-league plate appearances over parts of three seasons with the Cubs. Given his request for a second opinion on his oblique, it is unclear whether Clevenger is healthy enough to play right now. Cotillo hears that Clevenger will be added to Baltimore's 40-man roster, which could mean that current back-up backstop Taylor Teagarden is on his way out.

In return for Feldman and Clevenger, the Orioles are sending once-promising right-hander Jake Arrieta and righty reliever Pedro Strop to Chicago. Arrieta, 27, is one in a long line of Orioles pitching prospects who failed to pan out once he reached Camden Yards. The right-hander blew away the minor-league competition in his first few years in the organization, earning a spot on Baseball America's Top 100 prospects list in 2009 and 2010, but was never able to translate that success to the big leagues.

Arrieta owns a disappointing 5.76 ERA and 1.74 strikeout-to-walk ratio in 358 innings over parts of four seasons with the Orioles. The right-hander got one final chance to break camp with the rotation this year, but found himself back down in Triple-A after just four starts. He has a 7.23 ERA in 23⅔ innings on the year.

Strop, 28, had a breakout year with the Orioles in 2012, posting a 2.44 ERA in 66⅓ innings, but has failed to duplicate that success this season. While always a bit on the wild side, the right-hander has also picked up the bad habit of giving up an inordinate amount of home runs this year, which has hurt his performance considerably. Strop owns a 7.25 ERA in 22⅓ innings on the year, and will likely take Carlos Marmol's spot in the 'pen as the club's wild right-hander should his deal with the Dodgers go through.

• Will the Pirates' best record in baseball be enough?

• The ins and outs of Yasiel Puig