Homer Bailey signals his arrival -- again -- and may he keep on arriving, indefinitely.

When Gregor Blanco cued the last pitch of Homer Bailey's no-hitter to third baseman Todd Frazier on Tuesday night, I wondered what Frazier was thinking. I've never forgotten Yankees third baseman Graig Nettles' account of the ending of the famous (or infamous, depending on your rooting interest) 1978 playoff game with the Boston Red Sox to decide the fate of the American League East. The Yankees were up 5-4 in the bottom of the ninth at Fenway park, two out and two on, Goose Gossage on the mound and Carl Yastrzemski at the plate. Whatever happened next was going to be historic. Nettles said he was thinking, "Pop it up, pop it up." Yaz obliged, hitting an infield pop-up - over third base. "Not to me!" Nettles screamed inwardly. He gloved the ball, sending his team on to the League Championship Series.

Frazier had a harder play, even if Blanco had hit what should probably be classified as a routine grounder -- a lot can go wrong between the 5 and the 3 in a 5-3 putout. Frazier did complete the play -- whether he was inwardly screaming, "Not to me!" or not -- and Bailey had defeated the San Francisco Giants for the second no-hitter of his career. It's easy to feel jaded about no-hitters: They're relatively common, and now that we think of balls in play as something over which the pitcher does not exercise a great deal of control (just how much can be controversial), you can dismiss quite a few of them as less an example of a masterful performance than of a game where 27 batters just happened to hit ‘em where they are (or were) instead of where they ain't (or wasn't).

If you were initially inclined to be awed, the parade of no-name no-hit pitchers will quickly disillusion you, for mixed in with the Nolan Ryan Collection and the Sandy Koufax Quartet are no-hit games by (choosing at random) little-remembered hurlers like Tom Phoebus, George Culver, Mike Warren, and Juan Nieves. Heck, even Jack Morris threw one, even though he was assiduously pitching to the score at the time.

When a pitcher starts getting into multiple no-hitters, as Bailey has, he's entering more rarified company, rubbing elbows not only with the aforementioned Ryan and Koufax, but high-level contemporaries like Roy Halladay, Justin Verlander, and Mark Buehrle, as well as Cooperstown types like Randy Johnson, Jim Bunning, Bob Feller, Christy Mathewson, and Cy Young. Sure, the multiple no-hitters list isn't totally dominated by guys with plaques -- pitchers like Allie Reynolds, Virgil Trucks, Bob Forsch, and Carl Erskine didn't have all-time great careers, they were just very good pitchers for a period of time.

Whether Bailey belongs to the former group or the latter has yet to be determined. Having selected him with the seventh-overall pick of the 2004 draft, the Reds spent more than five years giving Bailey major-league auditions and hoping for consistency. They didn't get it until roughly the midway point of last season, when Bailey settled in for a strong second half climaxed by his September 28 no-hitter against a Pittsburgh lineup so weak that it brings to mind the Bob Dylan composition "I'm Not There."

Cincinnati Sports Media: Shame on You 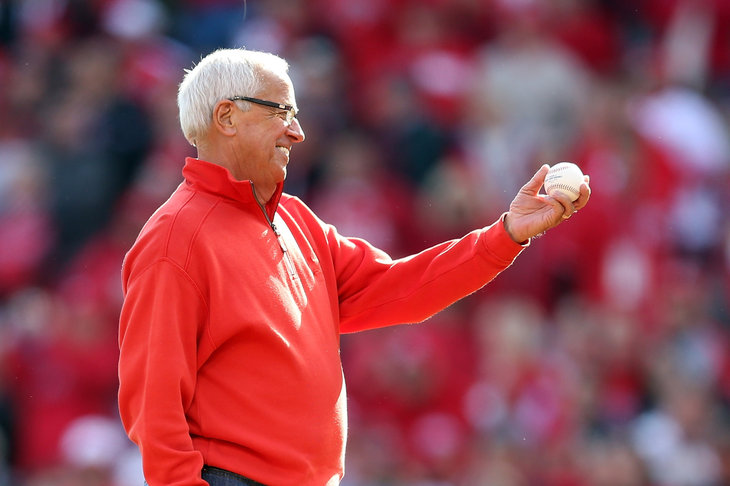 Pitchers face weak lineups all the time and vanishingly few of them throw no-hitters, so we can't discount Bailey's performance except as a sign of his arrival as the ace the Reds always thought he could be. Like most of us, Bailey is forever becoming, always an unfinished product. He has had his share of shaky moments this season -- his quality start percentage (the fraction of starts in which he's pitched at least six innings and allowed fewer than four earned runs) was 63 percent entering Tuesday night, good for 26th in the National League, 48th in the majors. So maybe he's arrived again, maybe he'll be arriving again sometime in the future. "Okay, he's really here now. No, wait, this is really him. No, this time." If the engine of a train hauling an infinite number of cars pulls into the station, can it truly be said to have arrived?

The wonderful thing about Bailey's second no-hitter is that it requires us to ask questions like this, and to keep asking them, start by start, for the rest of his career. Yes, he'll be burdened by high expectations, but he provoked them with excellent performances. It will be a lot for him to live up to, but also no less than he deserves, a kind of respect that few pitchers have earned.

• Why do baseball ratings continue to trend downward?