Erik Bedard, the Astros, and losing a one-hitter

Houston is far from the first team to lose a one-hitter, and we look at some of history's weirdest one-hit losses to prove it.

Share All sharing options for: Erik Bedard, the Astros, and losing a one-hitter

On Saturday night, Houston's Erik Bedard held the Mariners hitless for six and one-third innings and then left the game, having already thrown 109 pitches. The Astros bullpen gave up just one hit over the remaining frames: Hits aren't the only way to generate runs, though, and the Mariners won, 4-2.

Bedard took the loss. He struck out 10 but walked five, all of those coming in the fifth through seventh. Two came around to score in the sixth inning with the aid of a pair of Jason Castro passed balls, and a third scored in the seventh (along with a walk issued by reliever Jose Cisnero) when Cisnero surrendered that lone hit of the day, a Michael Saunders double. The Astros have averaged only 3.8 runs a game this season, so allowing four is typically too many, and that proved to be true once more on Saturday.

It's not the first time a team has held its opponent to one hit and lost, of course -- actually, that's happened about once every other year, on average, since 1916. In addition to those 51 games, there are five games in which a team lost despite allowing no hits. You can see the full list of 56 here.

You'd expect this to happen now and then, I suppose, but you'd (or rather I'd) expect almost all of them to be 1-0 games. Solo home runs happen, walks happen, stolen bases and errors and sacrifice flies happen; one run is scored without the benefit of more than one hit (or occasionally without even that) all the time. Indeed, the last time this happened (the Diamondbacks over the Dodgers in 2011) was a 1-0 win, as were the previous three times before that, and 27 of the 56 overall.

It's when I see a score other than 1-0 when I really want to know how that happened. Twenty of the remaining 28 scores were either 2-0 or 2-1; six of the other eight were 3-1 or 3-2 (but no 3-0, interestingly). Saturday's game was only the second time since 1916 that a team scored four runs on either zero hits or one (both teams happened to win, but I checked, and no team has done it and lost).

Here are the five most interesting one-hit-or-fewer wins that I've found, prior to Saturday's unique snowflake.

Steve Barber was a pretty good pitcher over his 15 seasons, but he was never a control artist, and 1967 was probably his worst season. In 172 innings, Barber walked 115 batters, or six per nine, while striking out only 118. Barber left the April 30 game one out shy of a no-hitter, but if you look at it, the amazing thing is that he'd held the Tigers scoreless for eight innings; heading into the ninth, he'd walked seven (one intentional) and hit two more while striking out only three. The Orioles finally scored their first run of the game in the bottom of the eighth, and Barber came out to try to finish the shutout, no-hitter and win. Instead, he walked three more, retired two batters (one on a sac bunt), and uncorked a wild pitch that allowed the tying run to score. Stu Miller finally replaced Barber, and the Tigers scored the go-ahead run when Mark Belanger dropped a throw that would have recorded the third out, leading to the Tigers' 2-1, utterly hitless victory. We don't have pitch counts from back then, of course, but this estimator puts Barber at about 150 pitches for his 10-walk, two-HBP game.

This one is here because it's so painful: Bill Monbouquette (who I'm confused and a bit ashamed to have correctly recalled as an Ally McBeal reference) pitched brilliantly over eight innings with one hit, four strikeouts, and (alone among these games where the no- or one-hit team scored more than one run) only one walk, and no hit-by-pitches or wild pitches, either.

In the bottom of the sixth, the Red Sox led 1-0; Monbouquette quickly got two outs, but then first baseman Tony Horton booted a Rich Rollins grounder that should have ended the inning. The next batter, Zoilo Versalles (who this otherwise fabulous contemporary account thought it was funny to call "Zorro"), hit a two-run homer, putting the Twins up for good. Anything could've happened, of course, had that inning ended there, as it should've; maybe Versalles leads off the next inning with a homer, maybe the Twins go on to score five or six more. Or maybe Monbouquette keeps the magic going for the last three innings (as he actually did for the remaining two) and locks down his second career no-hitter.

It wasn't a great time to be a pitcher named Young. The Mets' Anthony Young was starting his stretch of, between 1992 and ‘93, going an incredible 3-30 (including 27 losses in a row) despite a respectable 94 ERA+, and Boston's Matt Young, on this date, threw an eight-inning unofficial no-hitter and lost. He walked six while striking out seven. The first run scored when Kenny Lofton walked, stole second and third, and came home on an infield throwing error, the second involved two consecutive walks to start the third, a fielder's choice groundout moving the lead runner to third, and the failure by Carlos Baerga to throw out that runner (ninth-place hitter Mark Lewis) on a grounder to second. Opposing pitcher Charles Nagy surrendered eight hits and four walks, and the bullpen added one and two, but the Sox went just 2-for-12 with runners in scoring position, and one was an infield single moving the runner from second to third.

The White Sox would win 95 games with the best offense in the league in a very high-scoring year, plating six runs per game. That didn't stop Frank Castillo and relievers Pedro Borbon and Billy Koch, though, who performed brilliantly against them. To a lineup featuring Frank Thomas, Paul Konerko, Magglio Ordonez and Ray Durham, they allowed one hit -- it was a single by ninth-hitting catcher Mark Johnson, who was then immediately caught stealing. They walked only two (Thomas and Ordonez once each). They struck out nine. 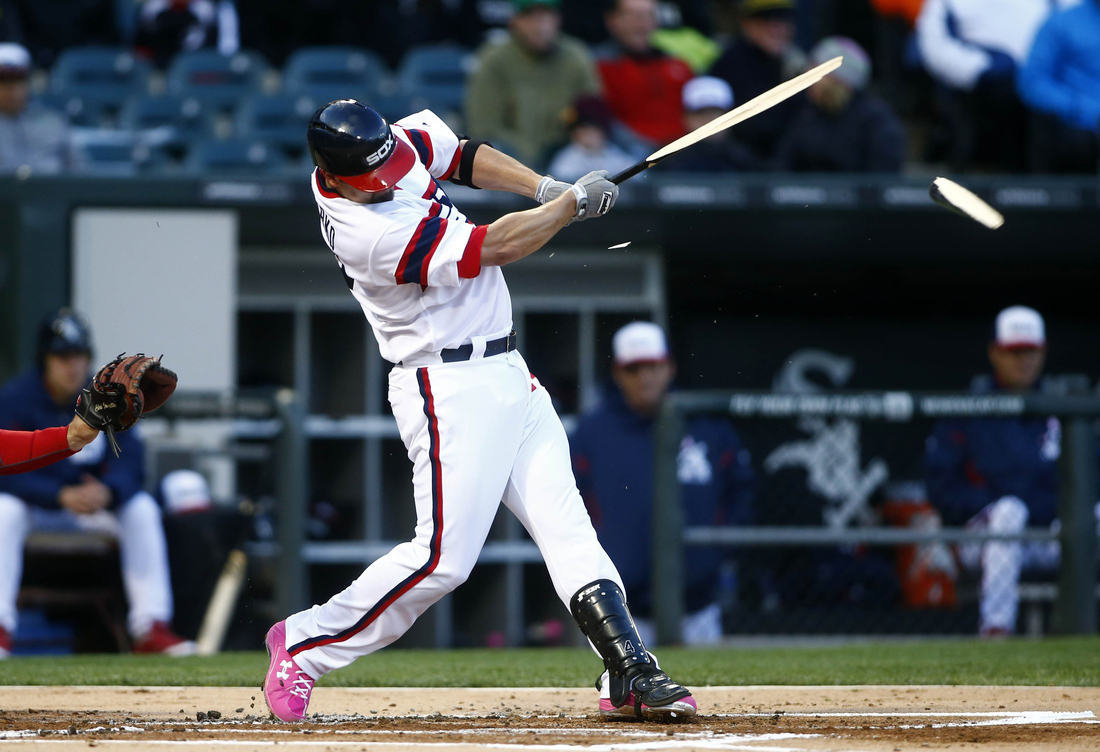 On defense, though? It was like a throwback game to the days when the gloves were smaller than the fielders' hands and the ball was mostly tobacco juice. The Jays committed five errors. In the top of the seventh, that walk to Thomas was followed by an error by Homer Bush at second, which was followed by another by Tony Batista at third (one of two he committed on the day). Those two ground outs probably would have gotten them out of the inning; instead, there were runners on first and second, no one out and one run in. A sacrifice bunt and sacrifice fly made it a 2-0 game; Carlos Delgado's solo home run in the ninth gave us our final score.

The 1990 season was one of what are now several "Year[s] of the No-Hitter": Randy Johnson, Nolan Ryan, Dave Stewart, Fernando Valenzuela, Terry Mulholland, Dave Stieb, and Mark Langston (in combination with Mike Witt) each threw one. At the time, baseball recognized two more no-hitters from that season that it no longer does: Melido Perez's six-inning rain-shortened effort for the White Sox against the Yankees and this one by Andy Hawkins, 11 days earlier, between the same two teams but working in the opposite direction. 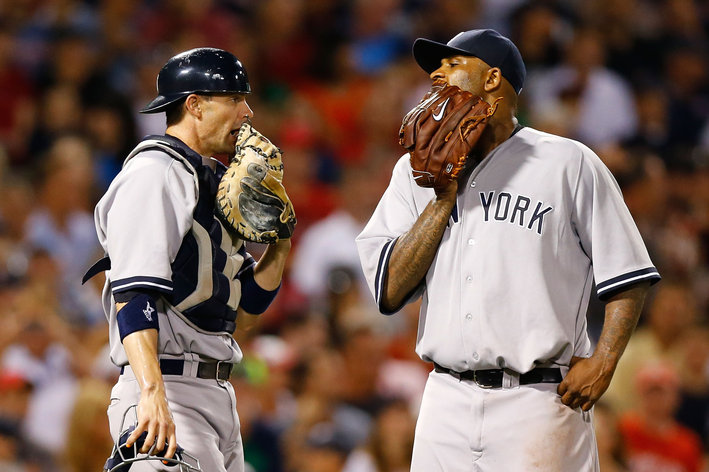 Sabathia is having the worst season of his career at a time the Yankees can't afford that.

Hawkins was perfect through four. He walked two in the fifth and another in the seventh, but still had a nice, crisp no-hit shutout going into the eighth. One problem was that the Yankees hadn't scored, either. The other problem was that the Yankees that year were kind of terrible. After Hawkins quickly got two outs on pop-ups to second, third baseman Mike Blowers booted a ground ball off the bat of Sammy Sosa (originally called a hit, but then changed). Sosa stole second, then Hawkins loaded the bases by walking Ozzie Guillen (which wasn't easy to do) and Lance Johnson. Rookie Jim Leyritz, who was not by any stretch an outfielder but was playing left field late in this one for some reason, then misjudged and ultimately dropped a Robin Ventura fly ball, allowing all three runners to score; Jesse Barfield, who certainly was an outfielder, then lost the next one in the sun, and Ventura came around to score the fourth and final run on that error.

Hawkins no longer gets credited with a no-hitter, because the rules committee declared the following year that a no-hitter must be a complete game of nine innings or more, and the White Sox didn't require a bottom of the ninth. It remains the most runs ever scored without the benefit of a single hit, and is now tied with Saturday's Mariners for the most scored on one hit or fewer.

• The man who would be a fake Cubs mascot