Braun is guilty, and admitted as much, but that doesn't mean Laurenzi did his job any better.

Ryan Braun might be a lot of things. He's almost certainly a "liar" (and a fraud), as Steven Goldman said here yesterday. He could be all sorts of other awful things.

What he's certainly not, though, is any more guilty this morning than he was the morning before that of the violation with which he was charged more than a year and a half ago.

Braun tested positive in October of 2011; the arbitration panel ruled in January of 2012 that there were significant questions as to whether that sample had been handled in accordance with the procedures laid out in the agreement between the league and the players; certainly, nothing we could possibly learn that didn't have to do with the handling of that specific sample could have anything to do with his culpability in that particular matter. Seems pretty straightforward, really.

Seems that way. It's not, though, apparently:

The sample collector that Braun bashed and tore apart should get the rest of Braun's entire contract.

Hopefully, Ryan Braun has reached out to collector Dino Laurenzi, Jr. and offered his apology for how he cast doubt re Laurenzi's integrity.

(Buster put this in a column, too.)

I sure hope the liar Ryan Braun apologizes to Dino Laurenzi, who collected his sample last year. Guy's life was thrown upside down.

Hey Ryan, maybe mix in an apology to the guy you got fired for your last positive PED test. Just a thought.

Do you think anyone on earth had a better day today than Dino Laurenzi?

What this sort of "analysis" does is take a complex legal problem and turn it into a sporting contest -- one on one (Braun vs. Laurenzi), right and wrong, black and white. It presumes that one of two conditions is true (that in sports terms, it's either a win or a loss): either Braun is innocent of all wrongdoing and Laurenzi set him up somehow -- doctored the sample, whatever -- or he's guilty and Lorenzi "wins," is entirely vindicated, becomes the good guy, and so on. In that view, Braun's acceptance of this suspension gives us plenty of reason to believe that he also legitimately failed the test in 2011, and thus, Laurenzi must have been the good guy, the winner.

In sports, which exist to pit one man or woman or horse or team against another, that sort of attitude generally works; in law, not so much. 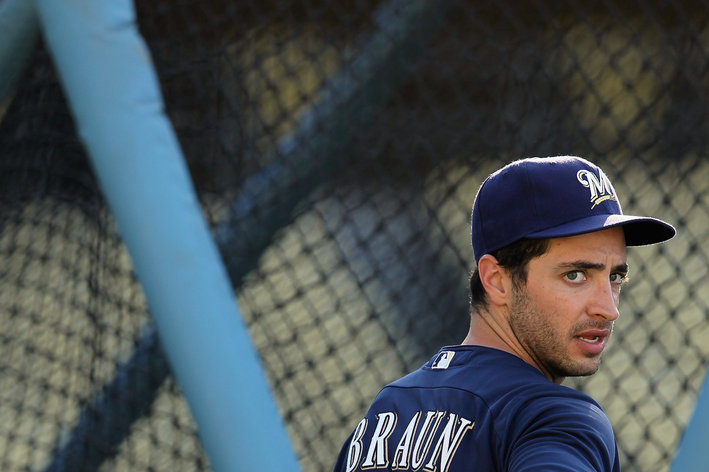 The laws of evidence and criminal procedure have developed the way they have because if we're going to find a person guilty of something that will deprive her of her liberty, we want to be damn sure that we're getting all the facts right. What this means is that, to protect the integrity of the overall system, there are certain specific procedures that must be followed in every case, with an eye toward ensuring that the evidence against the accused remains trustworthy and is collected and preserved in such a way that it protects the accused's basic rights. If those requirements aren't followed and the mistreated evidence is necessary to establish the person's guilt, that's where the inquiry stops; we don't care whether we think the accused is guilty or innocent, we don't even get to ask that question, because the evidence required to answer it wasn't handled in the right way, and as a matter of law, that evidence is gone.

It doesn't matter if we think this particular evidence is trustworthy despite the flaws in its handling; the point is to avoid those kinds of case-by-case determinations, by holding the people in charge of gathering or keeping the evidence to a certain standard that must be upheld in every case.

Baseball isn't the state or federal government, of course, but the league and union agreed to very similar rules, for very similar reasons; if the union was going to agree to subject its players to the kinds of harsh penalties the current system calls for, they insisted on requiring the testers to follow procedures that made completely sure that the samples were true and trustworthy -- not to permit an arbitrator to ask, on a case by case basis, whether we could be comfortable that the samples were probably trustworthy, but to make sure that precise procedures were followed, to the letter, in every single case.

Dino Laurenzi, Jr. had one job -- to make sure that the procedures for the handling of test samples, as established by the agreement between baseball and the players' union, were followed with respect to Braun's sample. The evidence presented in Braun's arbitration case suggested -- to two members of the three-arbitrator panel, at least -- that Laurenzi did not successfully perform that job.

That was all there was to it -- the procedures that must be followed in order to suspend a player under the agreement were not followed, so the player could not be suspended. It was not a declaration that Braun was "innocent" or that Laurenzi was somehow crooked, but only that the appropriate procedures for a "guilty verdict" were not followed. Maybe most importantly: in no way does the fact that Braun appears likely to have in fact been "guilty" mean that Laurenzi somehow did his job better than he actually did. Laurenzi was still put in charge of handling the samples in accordance with policy, and still (according to the panel) failed to do so. There's no reasonable way in which Braun's subsequent suspension, for different violations, serves as any kind of vindication for Laurenzi's failure to do the job that, had he done it, would certainly have gotten Braun suspended a year and a half ago.

Finally: as stated in more detail elsewhere, Braun doesn't owe Laurenzi anything. A major, kind of unspoken part of how the criminal procedure system works is that if your rights to having proper procedures followed have been violated, you not only have the right to contest those procedures, you're not only acting in your own rational self-interest, but you almost have a duty to raise those issues; regardless of guilt or innocence or something in between, in making sure the proper procedures were followed in building the case against you, you're a part of helping to police and enforce the integrity of the process for everyone else.

Sure, "things we learned about the collector" could insinuate something unsavory. It could also mean, translated from lawyer-speak into baseball-player-speak, that they learned that the collector may not have handled the sample in strict accordance with the procedures. 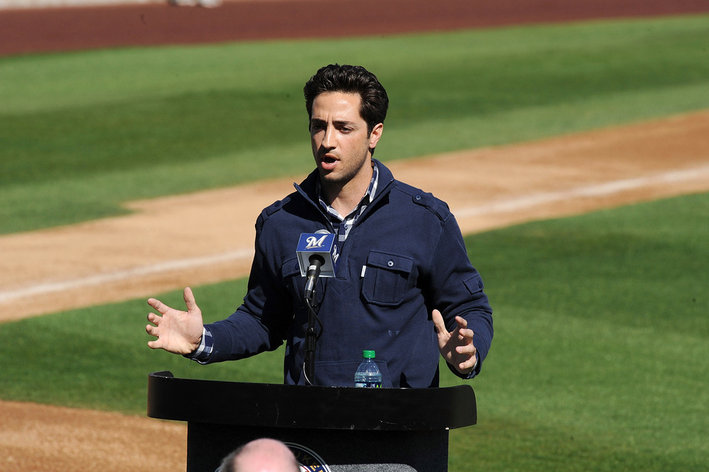 It took a couple of years, but Ryan Braun seems to have finally admitted that, yeah, he did cheat.

Which is ultimately what it did mean. Which Laurenzi didn't. Which is the reason Laurenzi faced media scrutiny and apparently lost his job -- not because Braun made one or two statements that may or may not have vaguely suggested bad things about him, but because Laurenzi did not in fact do his job.

So whatever else you may find in the litany of things Braun is guilty of, the ruination and character assassination of one Dino Laurenzi, Jr. is not on there. Rail at Braun all you like for the cheating he (apparently) did. In that 2011-12 appeal, though? Braun and his lawyers used the criminal procedure rules as adopted by baseball and the MLBPA in exactly the way they were intended to be used, and has nothing to apologize for there.