The history of the exhibition is littered with a fair number of jokers.

In an interview with Jim Duquette and Mike Ferrin on SiriusXM's MLB Network Radio on Tuesday, Phillies closer Jonathan Papelbon was asked about the possibility of Yasiel Puig making the All-Star team. Papelbon, who may well make the All-Star team himself, said, "To me, it's an absolute joke. It's really kind of stupid if you ask me... The guy's got a month, I don't even think he's got a month in the big leagues... To me it really does an injustice to the veteran players that have been in the game for eight-, nine-, 10-plus years. It kind of does them an injustice because they've worked so hard to stay there."

In one sense, Papelbon is right -- what we're seeing with Puig is a glorified hot streak. The thing is, it deserves that glory, being one of the great career-starting hot streaks of all time. In this, I am reminded of Andy Cohen, a rookie second baseman for the 1928 Giants. He was replacing one of the all-time greats in Rogers Hornsby, who had been traded to the Braves. When Cohen got off to a hot start, the New York papers started talking about how he was better than his predecessor. "That's a lousy trick to play on the kid," Horsnby said. "I ain't hitting now, but when I start I'll lose him."

Jonathan Papelbon defines "really kind of stupid" for us 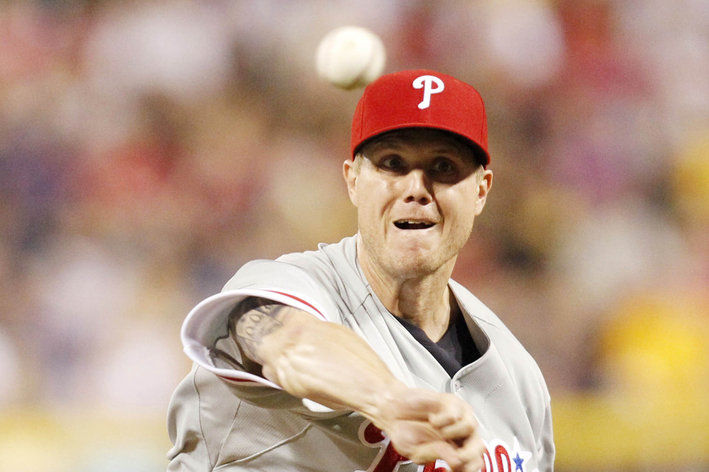 We can argue about the 50-percent thing. But Papelbon's not arguing about that. He's just talking a lot of nonsense.

I suspect that we're all guilty of playing that same lousy trick on Puig, because as good as he's been, it is almost certain that the game will humble him at some point soon. That said, the All-Star Game is an exhibition, "This time it counts!" be damned, and if the fans want to see Puig there, he should be there; if they want to see the Phillie Phanatic bat cleanup, they should get that too. The game is so pointless that back in 2002 the commissioner let it end in a tie, and even with home field advantage in the World Series in play, the game is still managed as a show, not a contest.

But that's not the only reason Papelbon is wrong. He defined the game as some majestic honor bestowed on veteran players, but it's not that, and never has been. Quite often it's simply been about honoring no-name players who had fluke first halves. Here's an All-Star team of lame All-Stars.

2B Tony Womack (1997): Womack brought to mind Ring Lardner's line, "Although he is a very poor fielder, he is a very poor hitter." His main skill was speed on the bases. A rookie in 1997, he hit .272/.318/.357 for the Pirates in the first half. In retrospect, it's amazing that Rich Loiselle or Al Martin never made an All-Star team.

RF Glenn Wilson (1985): Wilson was an excellent defensive outfielder with a great arm, but as a hitter he was a guy who owned a gas station. In 1985 he had the one big RBI year of his career, good enough to get him an All-Star berth and the inevitable MVP votes. He had hit only .266/.299/.434 in the first half, but batting behind Von Hayes and Mike Schmidt meant a good number of opportunities.

LHP Matt Young (1983): There is a nigh-infinite number of pitchers to choose from (Sandy Consuerga? Cal McLish? Barry Latman?) but I'm going with this hard-throwing Mariners southpaw who never could conquer his wildness. Young was the quintessential Puig pick, a rookie who put up a 2.86 ERA with weak peripherals in the first half. His ERA shot up by about a run in the season's second act, and he spent the healthy years remaining to him trying not to lose 20 games. His final career record was 55-95 with a 4.40 ERA.

I chose the foregoing nine at random. You could choose another nine, 18, or 27 players and still not come close to running out of All-Star obscurities. The game has been a haven for "Who?" right from the very beginning, when the National League chose Cardinals' lefty Wild Bill Hallahan to start the inaugural game.

Pro tip: If you want to beat a lineup comprised of the best hitters in the game, do not go with someone whose name begins with "Wild."

Regardless, if Puig was hitting .343 instead of .443, Papelbon might have a point on the merits, even if history is comprised almost entirely of examples which defy his principles. But Puig is hitting .443 . This is something we haven't seen before, at least not in our lifetimes. Heck, during his 56-game hitting streak in 1941, Joe DiMaggio only hit .408. Puig still needs to double his plate appearances before he outdoes the Clipper in anything like the same amount of playing time, but that doesn't make this any less special; even in this amount of playing time, it's not something that most of Papelbon's honored veterans will ever do.