If Yanks fade, Kuroda, not Hughes, is the prize

With the Yankees emerging from a rough June, trade speculation has centered on free-agent-to-be Phil Hughes, but Hiroki Kuroda, the staff's de facto ace, is the real attraction.

Share All sharing options for: If Yanks fade, Kuroda, not Hughes, is the prize

The graduating class of 2013 has only witnessed one season in which the Yankees didn't reach the playoffs, but since they are currently in fourth place in the AL East, six games out of first place and 2.5 of the wild card, they could be on the verge of witnessing their second. Though the deficit isn't insurmountable, things seem to be trending in the wrong direction for the team, which went 11-16 in June and currently has only a 28.6 percent chance of making the playoffs. As they head towards the July 31 non-waiver trading deadline, the team will have to decide if it is a buyer or seller, and if the latter, who they should move.

It's no surprise that the Yankees aren't doing well; in fact, what's surprising is they've remained as competitive as they have given their injury woes. The mainstays of their roster, Mark Teixeira, Alex Rodriguez, Derek Jeter, and Curtis Granderson have spent the bulk of the season on the disabled list. Without them, they've been forced to use replacement-level types like Lyle Overbay, Vernon Wells, and Travis Hafner, all of whom have had their moments but are now showing the weaknesses that led to their being available to the Yankees in the first place. Wells provided an offensive boost in April with an OPS over .900, but since then he's hit. .192/.213/.280 in 188 plate appearances. Like Wells, Hafner was hot in April, but has hit .174/.256/.313 in 160 PAs since. Overbay hit a solid .283/.326/.535 versus right-handed pitchers through the end of May, but went cold against them in June, hitting .191/.240/.319. It's hard to construct a plausible argument that any of these players will stage a strong recovery.

Unfortunately, there is no simple solution for sustaining the sort of offensive boost the Yankees need. A-Rod has begun playing in the minors. Jeter, Granderson, and Francisco Cervelli will all be back at some point, but their return might prove to be too little too late in the competitive AL East. The Yankees do have some offensive prospects in the high minors, but aside from Zoilo Almonte, who is probably playing over his head (.333/.370/.500 in 46 plate appearances) as Wells' replacement, and catcher J.R. Murphy, who has done well in Triple-A since his recent arrival (.305/.406/.492 in 69 PAs; .277/.366/.438 overall), help will probably not come from that direction any time soon. David Adams, brought up from the minors to provide a boost at third base, has been something of a disaster at .189/.250/.279 in 121 PAs.

For more Yankees talk, become one with the Pinstriped Bible

Though the Yankees have generally pitched well, it's hard to find a silver lining in such a damaged roster. Though it's premature to write them off, their position is fragile enough that it is reasonable to entertain scenarios in which they are sellers at the deadline. Should that come to pass, it seems obvious that the organization should focus on reloading, just in case this doomsday scenario of aging and injured stars repeats next season. Perhaps by that time prospects such as outfielders Tyler Austin, Slade Heathcott, and Mason Williams, as well as catcher Gary Sanchez, will be close enough to the bigs that the Yankees will have more depth with which to fill out their lineup card, but that still leaves enough positions potentially open that the club could use more in the way of ready talent.

But getting into a selling mindset can't be easy for an organization that's had such perpetual success for the past 18 seasons. Still, general manager Brian Cashman might be willing to part with some players to make the team stronger. The names that have come up the most often so far have been pitchers Joba Chamberlain and Phil Hughes, both free agents after the season. While those fundamentally uneven pitchers may still be attractive change-of-scene candidates -- particularly Hughes, who is still just 27, retains good stuff, and has a 3.38 ERA away from Yankee Stadium this year (4.04 career versus 4.77 at home) -- the Yankees are sitting on one really attractive trade chip that could bring a bigger return, veteran right-hander Hiroki Kuroda.

This year, like most, the hottest commodity as the trade deadline approaches is starting pitching. The obvious sellers -- the Marlins, Cubs, and White Sox -- have already been fielding interest for Ricky Nolasco, Matt Garza, and Jake Peavy, respectively. In terms of present value, Kuroda compares favorably with all of them.

While Kuroda's raw talent might not be as good as some of the available pitchers this deadline (Peavy, for one, had a higher peak), he has a better idea what to do with it than most. He's a consistent pitcher with a strong track record, not overpowering, but he has above average command most of the time; though his fastball sits around 90 or 91 mph, he throws pitches how and where he wants them, inducing grounders and keeping the ball in the park. He's performed in both leagues and in the postseason.

His status as an imminent free agent will make him appealing to teams that need a short-term loaner. Many of the pitchers that might be available at the deadline-Cliff Lee, Yovanni Gallardo, Kyle Lohse, and Peavy among them-come with commitments lasting at least another year. Even if Kuroda's status as a short-timer cuts into the potential return on a trade, he should bring more than potential free agents Hughes and Chamberlain in that his value is actual, not speculative. 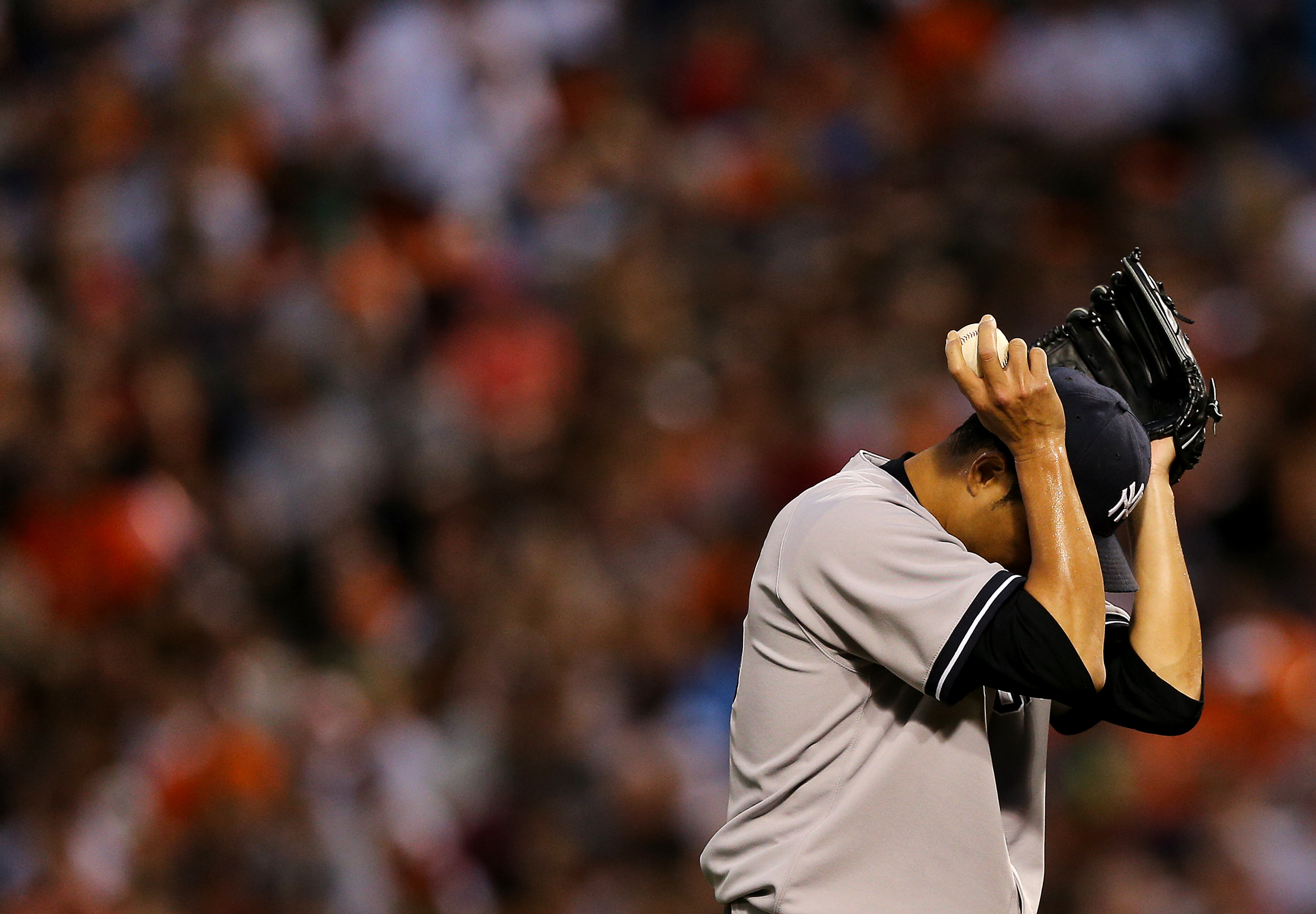 The biggest obstacle for a trade is any no-trade language attached to Kuroda's one-year, $15 million deal. He vetoed trades to the Tigers and Red Sox at the 2011 deadline and, at least at the time, was perceived to have an attachment to the West Coast. There are also some questions about his health. Before Sunday's start in Baltimore, he felt tightness in his left hip flexor. His MRI came back clean, but the Yankees decided to skip his start on Friday as a precaution. Kuroda hasn't been placed on the disabled list, and according to manager Joe Girardi, it's possible that he will be ready to start early next week. Obviously an injury is something that interested buyers would watch closely, but it doesn't necessarily mean he won't garner interest if it's minor. Peavy is currently on the disabled list with a rib injury, and he's still expected to be traded, just as he was when he was dealt to the White Sox in 2009.

Still, trading Kuroda isn't a decision that will be made lightly, as his departure from the rotation would be tantamount to conceding the season. C.C. Sabathia has shown a drop in velocity and has been a rollercoaster of outcomes this season. Phil Hughes had a good start against the Twins on Monday, but has fluctuated between average performances and tossing batting practice for the opposition. It's unclear how much productivity Andy Pettitte has left (a question that's asked every year). David Phelps has been just okay, which might be his ceiling.

Though the decision to move him will be unpopular with fans who have come to enjoy Kuroda's flinty effectiveness, moving him would be the right reaction for a team looking to rebound quickly from a difficult year. Again, it's still unclear whether or not the Yankees will be in a position to sell -- if they can stay close until the wounded return, and the recovered players subsequently perform at a high level, they'll still have a chance worth pursuing. But if they find themselves in the position where their chances of making the playoffs have diminished, there's value in recognizing that teams will overspend for the short-term gain of a seasoned pitcher.