Figuring out the best trades of yesteryear on the trade deadline day.

What was the best trading-deadline deal of all-time? In It Ain't Over ‘Til It's Over, the Baseball Prospectus pennant race book, I argue that it was the six-player deal from 1964 in which the Cardinals acquired Lou Brock from the Cubs for three players led by pitcher Ernie Broglio. The reasons for picking that trade are many. Brock had an immediate and dramatic impact on the Cardinals' fortunes that season. The Cardinals went on to win the World Series that year. Brock, who tuned 25 three days after the trade, went on to have a Hall of Fame career, ultimately retiring as a Cardinal with the single-season and career stolen base records and 3,032 hits to his credit. Also significant is the fact that the trade occurred long before the advent of free agency, meaning the Cardinals not only acquired a future Hall of Famer, but did so at a time when they (and the Cubs) could expect to own him for the rest of his career.

According to Baseball-Reference's Wins Above Replacement (bWAR), Brock was worth 41.7 wins above replacement to the Cardinals. Broglio and company (pint-sized lefty Bobby Shantz and extra outfielder Doug Clemens) were actually a combined 0.7 wins below replacement over the remainder of their careers. Adjust for the sub-par performance of lefty reliever Jack Spring, who went to the Cardinals from the Cubs along with Brock and a minor leaguer who never made the majors, and the total net in bWAR for the Cardinals in that trade was 42.2 wins above replacement.

However, if we credit teams for the remaining careers of the players acquired, the Brock trade was not the most lop-sided deadline deal of all time in terms of long-term outcome. I illustrated this with a chart in It Ain't Over, but I'd like to revisit it here for a variety of reasons. First, that book came out six years ago. Second, I used Baseball Prospectus's Wins Above Replacement Player (WARP) in my calculations for that Baseball Prospectus book. WARP is every bit as valid a statistic as bWAR, but the latter has become the industry standard, largely because of how easy it is to use thanks to the fantastic interfaces at Baseball-Reference.com. Third, I included eight waiver-period trades on my chart in the book (seven of them occurring in August and one occurring in September).

With the exception of the switch to bWAR, however, I will use the same method that I used in the book. Teams are credited for the remainder of each player's career from the time of the trade, regardless of how much of that time was spent with the team that acquired him in the trade in question. The idea here is to credit teams for acquiring players at certain points in their careers, without complicating the matter by docking them for their inability to retain them into their free-agent years or for subsequently trading them too early, or, for that matter, crediting them for knowing when to trade them during their declines. It's imperfect, to be sure, but it is simple, clear, and presents what I see as a snap-shot of the trade at the time it was made. Now that we know what remained in each player's career, we can evaluate these trades without having to estimate any player's potential.

One other note, I've only considered trades that happened during the season prior to the non-waiver period (through June 15 from 1923 to 1985, through July 31 since 1986). I've also eliminated trades made in April as I believe that is too early in the season for a team to be motivated to make a deal by its on-field performance that season. In fact, the earliest trade on my list happened on May 25. That trade also happens to top my list. Speaking of which, here is my top 10:

Players in italics are active in the major leagues as of this writing. Teams in bold made the playoffs in the year of the trade.

None of the three trades on that list involving still-active players made my list in the book in 2007, for obvious reasons. For example, Grady Sizemore didn't become a big-league regular until 2005, Brandon Phillips didn't become the Reds' everyday second baseman until 2006, and Cliff Lee didn't emerge as a star pitcher until 2008. All three obviously have the potential to move further up the list, though Bartolo Colon's comeback is creating some drag on that Indians deal from 2002 as he was the player Cleveland dealt to the Expos (along with RHP Tim Drew) for those three studs and veteran slugger Lee Stevens.

Going further down the list, the only other trade involving an active player to have netted the winning team more than 20 bWAR thus far was the 2008 trade that sent CC Sabathia to the Brewers. Sabathia has been worth 26.8 bWAR since the day of that trade, while the players the Indians received for him-OF Michael Brantley, 1B Matt LaPorta, and RHPs Zach Jackson and Rob Bryson-have thus far been worth a combined 5.2 bWAR with Brantley the only one above replacement level. That's a net of 21.6 bWAR for the Brewers, though with Sabathia struggling this season, Brantley is actually shrinking that number.

MLB Trade Deadline: If the Nationals want to sell, what do they have? 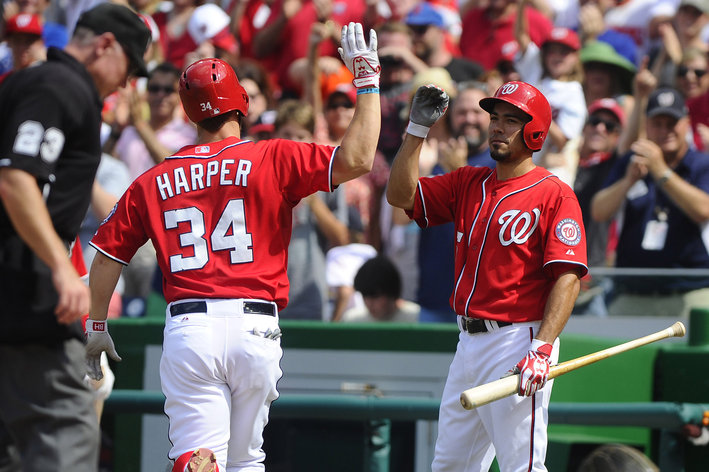 Less than you think.

Trades further down on the list with the potential to bump Jon Lieber, who had yet to make his major league debut when the Pirates acquired him and Dan Miceli from the Royals for Stan Belinda, off the list are the 2009 deal that sent Cliff Lee from the Indians to the Phillies (18.9 bWAR gain thus far for Philadelphia), the 2008 deal that sent Mark Teixeira from the Braves to the Angels (17.7 bWAR gain for the Angels), the 2009 deal that sent Matt Holliday to from the A's to the Cardinals (17.0 bWAR gain for St. Louis), and the 2010 deal that sent Lee, who is the subject of rumors again at this year's deadline, from the Mariners to the Rangers (15.2 bWAR gain for Texas, thus far). Of that lot, the 2009 Lee deal has the best chance given Lee's continued excellence, its lead on the others, and the lack of a breakout player in the Indians' return, which included IF Jason Donald, C Lou Marson, RHP Carlos Carrasco, and RHP Jason Knapp, who hasn't pitched since 2010 due to a pair of surgeries and is now out of baseball at the age of 22.

Knapp, who was considered the key player in that deal, is a fitting bookend opposite Randy Johnson, who threw just 55 2/3 innings for the Expos before being just one of four players sent to the Mariners for Mark Langston. Those two represent the absolute extremes when it comes to trading for prospects. Every now and then one of them turns into an inner-circle Hall of Famer, but there are far more Jason Knapps in the world than Randall David Johnsons.

• Michael Young will only accept trade to Texas