Rodriguez, once again healthy after suffering a strained quadriceps, is hoping to return to game action soon.

While Alex Rodriguez continues his attempts to fend off a suspension from Major League Baseball, he is still working on a return to the Yankees' lineup. Rodriguez will play in a simulated game on Thursday and anticipates beginning a rehab assignment on Friday, reports ESPN.com.

Rodriguez has missed all of the 2013 season after undergoing hip surgery in the offseason to repair a torn labrum. He began a minor league rehab assignment on July 2, but was shut down again after suffering a strained quadriceps.

Yankees General Manager Brian Cashman was hesitant to say where Rodriguez would play on Friday. Cashman told ESPN, "We have a schedule and we'll be checking the weather...We don't want to say yet." 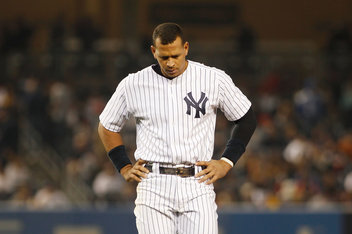 Facing a lifetime ban if he did not cooperate, Rodriguez has instead reportedly chosen to work with the league

However, Rodriguez's efforts to return may all be for nought. Reports earlier suggested that Rodriguez -- along with other players implicated in the Biogenesis scandal -- could be suspended as soon as Friday. Early reports Wednesday indicated that the MLB would impose a lifetime ban on Rodriguez if he chose not to cooperate, but reports Wednesday night say Rodriguez and his representatives are working with the league on a settlement.