Sometimes, trying to honor the game just results in embarrassing everyone involved.

Call it the Pity Rule: in baseball, every team in the league must be represented by at least one player in the annual All-Star Game.

The popular explanation for the Pity Rule is twofold: (1) it prevents large-market teams from dominating the game, and (2) it gives fans in markets with bad teams a reason to watch the game. To me, it seems to fall short on both fronts. On the first point, there were serveral years in the middle of last decade during which, despite the Rule, the entirety of the AL squad seemed dominated by Yankees and Red Sox. At the same time, though, it's often not the "big market" teams that appear overrepresented; Oakland fans famously stuffed the ballot box in 1988, and it's pretty clear that there were some rigorous get-out-the-vote efforts in Baltimore this season. On the second point, as a fan of a team that's been the "beneficiary" of the Pity Rule in the past, I can tell you that the fans in that market who watch the game will watch to see the superstars on other teams, not to see the local empty-.300-hitting first baseman or hit-lucky middle reliever get his unearned moment in the sun -- and historically, many of the true Pity Rule types haven't played in the game, at any rate.

More to the point, the Pity Rule removes the game one more step from its presumptive goal of celebrating the game's best players; it's a celebration of the players who are best or have performed the best for three months, as determined by an easily manipulated voting and decision process, so long as those players are healthy and willing to play and the pitchers didn't start too recently, and so long as every team is represented, regardless of whether they have a deserving player on the roster. Some of these things can't really be avoided; the last one certainly could.

The Pity Rule doesn't seem to have come into play significantly this season, at least: I count eight players who were selected as their team's sole All-Star (not counting Mike Trout, who was elected by fan vote), and all of them have a pretty good case to be there. The Dodgers' Clayton Kershaw, of course, is a no-brainer. The A's, Braves and Rays certainly deserved more than one selection (Josh Donaldson? Andrelton Simmons? Evan Longoria, fercrissakes?), but Bartolo Colon, Craig Kimbrel and Ben Zobrist are solid choices -- though, maybe not so much for 2013, in Zobrist's case, as for the fact that he's been one of the game's best for five years and has made only one prior appearance.

The Astros and Marlins are terrible, but Jason Castro is second to Joe Mauer in wins above replacement (either version) among American League catchers, and Jose Fernandez entered Sunday in the top fifteen among NL pitchers, as did the Cubs' Travis Wood. The Padres' Everth Cabrera over fellow shortstops Simmons and Ian Desmond may be the most questionable, but he's second among NL shortstops in Fangraphs' wins above replacement (fifth in Baseball-Reference's, thanks to some defensive-value disagreement) and leads the majors in stolen bases, which can't be a bad thing for a game that's still mostly about entertainment.

So, this year, I don't think the Pity Rule has necessarily created any All-Stars. There have been some doozies in the past, though. I went back through the past 25 years, to the 1989 game, and here, in chronological order (and with apologies to two of my favorites, extremely-light-hitting first basemen Ron Coomer and Ken Harvey, who just miss the list), are what I see as the Rule's ten least-deserving beneficiaries:

The Tigers went from a division title in 1987 to 103 losses in ‘89, but it's hard to blame this pick on the Pity Rule. In an exceptionally tough year for hitters, Henneman entered the break with a 4.17 ERA in 45 relief innings. He'd had 22 saves in 1988 and would repeat that number in ‘90, but in ‘89 he was just a barely-serviceable middle reliever. I can't find any indication of why Henneman made the team over should-be Hall of Fame second baseman Lou Whitaker, who had 18 home runs at the break and was in the midst of one of his greatest seasons.

Olson was a rookie catcher who'd put up a lovely 123 OPS+ in the first half... but in only 164 plate appearances. He put up just a 64 OPS+ in even fewer tries in the second half, and had only one more full year in the big leagues. This one can probably be blamed on roster construction needs more than the Rule: emerging Braves outfielder Ron Gant was hitting .318/.367/.597 with 17 homers at the break.

Didn't think you'd see a Yankee on here, did you? The ‘91 Bombers were a thoroughly dull, 91-loss squad, and Sanderson was selected for his 9-3 won/lost record (not his 3.83 ERA, which was around 10 percent better than average). It's surprising (but wouldn't necessarily have been better) that Tony La Russa didn't pick Don Mattingly, who was just a year removed from six straight All-Star Games and was hitting .301/.351/.408.

In their second season post-Barry, the Pirates were pretty dreadful, and Garcia was no exception, with a .267/.302/.332 line (68 OPS+) at the break. While the Pirates almost certainly had better, they didn't have a lot better. 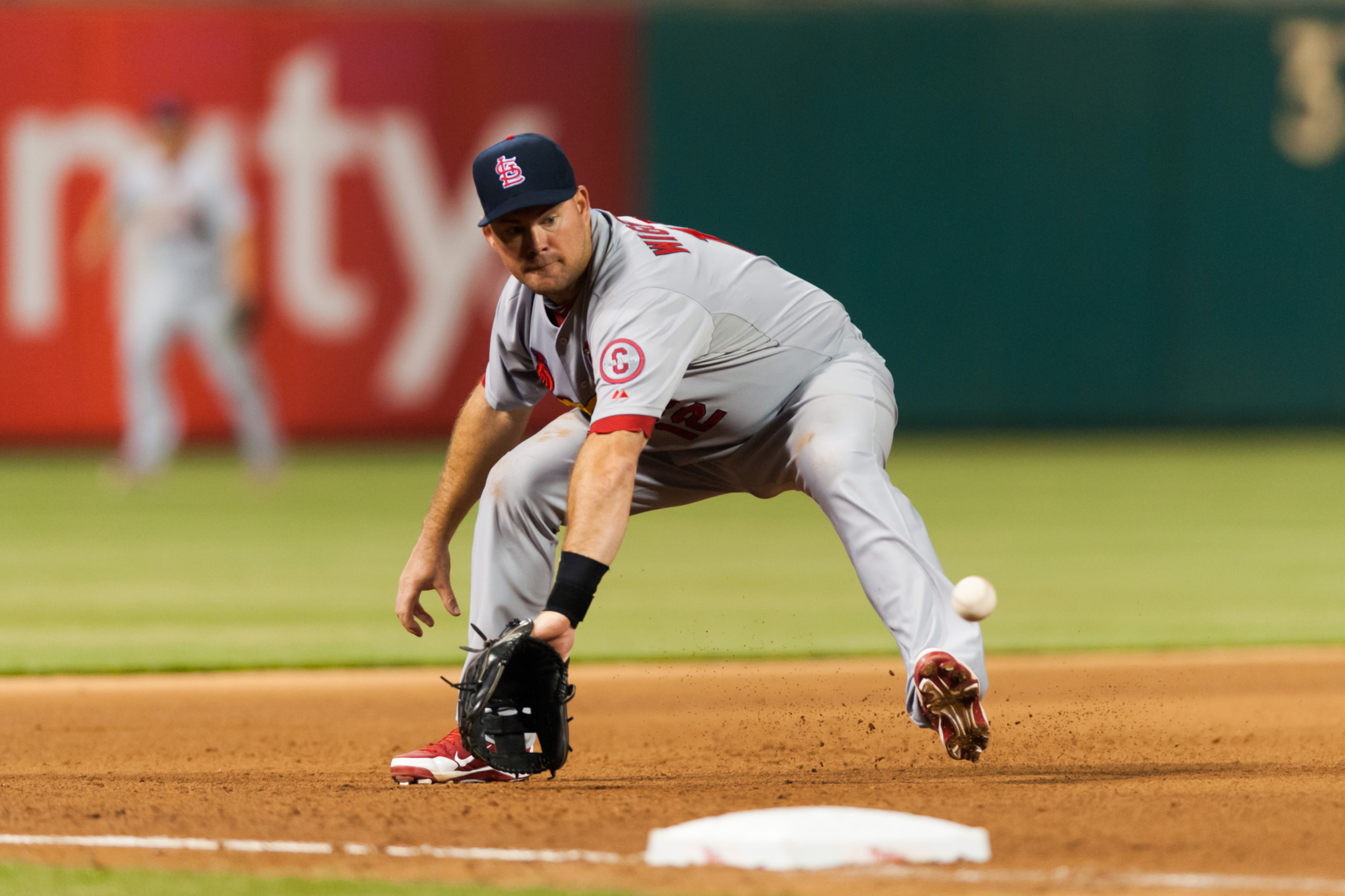 Now, this was Womack's first full season, before I think anyone really appreciated exactly what it meant to be Tony Womack, who for quite a while was perhaps the worst everyday player in baseball. At the break in ‘97, Womack had an okay-looking batting average (.272) but just an 86 OPS+. He'd stolen 28 bases in 31 attempts and wound up leading the NL in that category, so he had that going for him, but both Fangraphs and Baseball-Reference both charge him with an eye-popping 26 runs below average for that season in the field, making him a below-replacement-level player.

Vaughn was an All-Star four times, for three different teams; this one was easily the strangest, and speaks to the 100-loss Rays' utter lack of anything resembling a baseball team. Vaughn was hitting .244/.330/.497 (with 21 homers, but in a year when another guy hit 73), good for a 115 OPS+, while spending most of his time at DH. There had to be dozens of players around the league who deserved that spot over Vaughn, were it not for the Pity Rule.

Brace yourselves for this one. This was Williams' second consecutive selection, and he'd earned the first (inasmuch as a closer can), with a 1.83 ERA and 25 saves. At the break in ‘03, he had the same 25 saves, but with a 6.44 ERA. It's not as though his ERA was inflated by a huge blow-up after the rosters were announced; he ended May at 6.04 and June at 5.58. Williams was traded to the Phillies after appearing in one more post-break game and was used as a setup man, finishing the year with 28 saves and a 6.14 ERA in 63 innings, the last he threw in the majors. 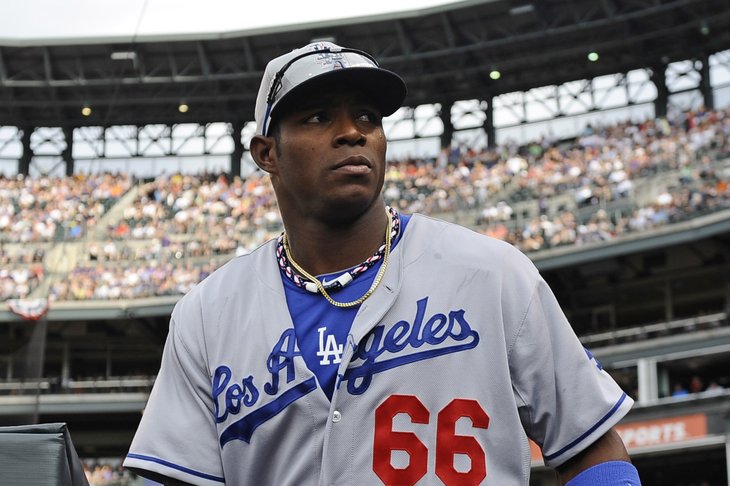 Puig has a chance to become the sixth Dodgers rookie to ever make an All-Star Game.

The great thing about Redman's somewhat famous selection -- he was 6-4, but with a 5.27 ERA -- is that it's hard to point to a better choice on the Royals of that season. The team lost 100 games; of the regulars, only Mark Teahen and Emil Brown ended with an OPS substantially above average, and both were just below average at the All-Star break; of the 17 pitchers to start at least one game for the Royals, 16 (all but Adam Bernero, who threw 13 innings) ended the year with an ERA above 5.00. Redman, like Vaughn above, is an example of the Pity Rule flat-out stealing a roster spot from any one of very many pitchers from around the AL.

Ty Wigginton. All-Star! And recently! Presumably chosen because of his willingness to stand at and butcher positions all around the infield, Wigginton was hitting an almost perfectly average .257/.315/.435 at the break. He didn't get up to bat, but Ty Wigginton, who has probably played and underwhelmed for your team at some point in the last 12 years, appears in an All-Star Game box score. That's a thing that actually happened.

It seems that the frequency of Pity All-Stars may have slowed a bit recently, if only because the constant expansion of the rosters makes it less and less likely that any team, no matter how poor, will have only one representative. All the same, though, it happens, and then these guys are "former all-stars" forever. That just seems wrong, doesn't it?

• Harper serious about telling manager to "play me or trade me"