The goal should be to get all calls right, not just some calls.

Share All sharing options for: MLB instant replay still emphasizes getting it wrong

The bottom of the ninth inning of Tuesday's Astros-A's game at Oakland featured a frustrating scene. With two outs and a runner on first base, Chris Young hit a long fly down the left field line that went into the stands very close to the foul pole. The hometown fans signaled fair; the umpire said it was foul. The game itself was at stake. Fair and the A's had won on a walk-off home run, foul and the game would go on, Young resuming his at-bat with the count against him 0-2.

A's manager Bob Melvin came out and argued that the call should be reviewed. This wasn't just a matter of partisan interest, but of accuracy: The ball was so close to the pole that the call could have gone either way. Melvin faced an uphill battle in getting the umpires to act, because this was Angel Hernandez's crew, and Hernandez's opposition to replay is well known. After the game was delayed roughly five minutes so that Melvin could lobby for a review that should have been de rigueur, the umpires came back with a call that Melvin must have known was inevitable: foul ball. To be fair to the umpires, the replay was stubbornly unclear -- the ball seemed to be on the foul side of the pole, but it also might have just nicked it and changed direction. Still, when you have a combination of a recalcitrant crew and a borderline call, there's a reason to wonder if integrity went out the window on that particular call.

Today, Major League Baseball took a preliminary step towards rectifying such situations by putting the decision as to when calls are reviewed by giving managers three challenges per game, one in innings 1-6 and two thereafter, on all but ball-strike calls and hit by pitches beginning in 2014. Umpires will still initiate home-run reviews on their own, and therefore these reviews will not cost a manager a challenge. This removes one clear benefit of a mandatory replay system, emasculating the Hernandez types who believe that the umpire's first ruling is always the best ruling. Unfortunately, it's also a step in the wrong direction in that Baseball should be pursuing a program to get all calls right, not just some calls.

The problem that Baseball faces when it comes to instant replay, and this has been the situation for decades now, is that the umpire has the worst seat in the house. The fan watching at home has a better look at the play than he does. The coaches and players cannot see the replay from the dugout, but it's a simple matter to send someone scurrying up the tunnel to the clubhouse to get a better look. In prizing "the human element" that is the occasional blown call more highly than games having the proper outcome, Bud Selig and his cartel pals put the very integrity of their games in question -- that same integrity that has led them to an obsessive, self-defeating focus on so-called performance-enhancing drugs.

If a player gets back on the field by using human growth hormone instead of an aspirin, the MLB PED Gestapo will hound him to the sidelines. If that same player is credited with a home run he didn't deserve (or deprived of one he did) because the umpire was watching a pigeon do loop-de-loops over the infield instead of the ball, well, that's just the way it goes.

Apparently Baseball cannot see the equivalence between a player cheating and the umpire failing to render a correct call. The end result is the same in both cases -- the outcome of the game is artificially altered. Moreover, the sequence of cause and effect is much clearer when it comes to the umpires. We can never know for certain what the correlation between a player's drug use and his performance on the field. Maybe the single/walk/strikeout/home run resulted from his swallowing his secret formula, maybe the pitcher just hung a fat pitch that anyone would have hit out. The umpires, however, are faced with binary choices -- safe or out, ball or strike, fair or foul. If an umpire calls a player safe when he was clearly out, a la Don Denkinger in the 1985 World Series, and 47 runs come across as a result, we know exactly how the course of the game was changed.

Just as Baseball was complicit in the PED use of players in the 1990s and early 2000s by not legislating against it, by allowing umpires to make calls that current technology shows are very clearly wrong, Baseball has been complicit in undermining the legitimacy of its own games. 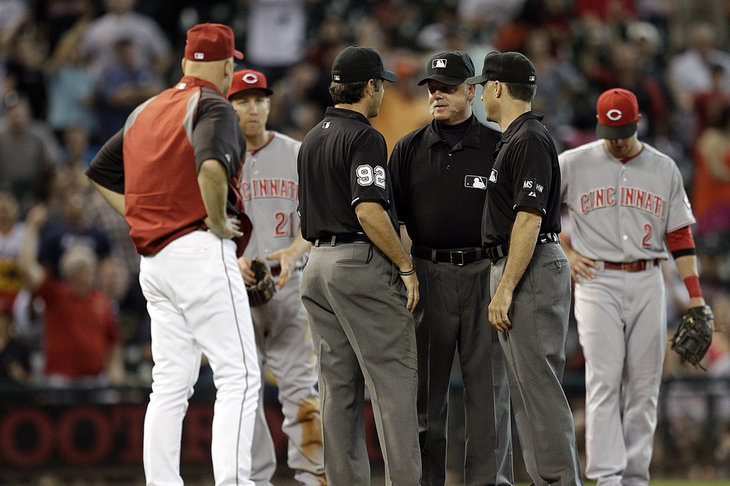 The Lords of Baseball, convening in Cooperstown because of General Abner Doubleday, have finally agreed on a video-review system with some serious teeth.

A challenge system is needlessly complicated. Umpires are, on the whole, very good at their jobs. They get the bulk of calls right, and there are only a few truly controversial calls in most games. Those calls that do need more than light scrutiny could be handled by a remote umpire, just as in the current plan, and relayed to the on-field crew chief via an earpiece. This may seem to be potentially time-consuming, but your standard baseball broadcast gets its initial replay in before the next batter's walk-up song is finished playing, enough time for said umpire to say "Hang fire on that next pitch for a mo'. I want to take another look at this."

Instead, managers will be limited as to which questionable calls stand, meaning that some blown calls will inevitably go on the books.

Perhaps worse, having one challenge in innings 1-6 and two thereafter encourages one of the most pernicious notions ever to infect baseball, the idea that the late innings are somehow vastly more important than the early ones. This has led to $10-million closers like Jonathan Papelbon, Rafael Soriano, and, yes, Heath Bell, as well as managers "saving" said expensive gewgaws to "protect" a three-run lead in the ninth inning. Teams can lose a game in any inning, though, and getting behind 2-0 in the first can be as much a death sentence as giving up two in the eighth or ninth. They all matter.

The first manager to figure this out (something that managers understood as recently as the 1980s) will have a decided competitive advantage. In the meantime, everyone else will toddle on, encouraged in their illusions by the game's self-satisfied lords, who after today will no doubt break their arms patting themselves on the back for their willingness to get some calls right. Inadequacy and misplaced self-regard, they name is Major League Baseball. In the real world, "somewhat right" is just a fancy way of saying "mostly wrong."