Why do so many grumps have so much invested in punishing Yasiel Puig? It has less to do with Puig than them.

Moment to moment, watching baseball is concrete, and as un-abstracted as anyone could ever want. There are humans sitting in seats of various prices watching other humans in their own proscribed places, all following fast on the unpredictable movements and various violent punishments of a regulation-sized baseball as it is obliterated by Miguel Cabrera and manipulated by Matt Harvey and kittenishly batted-at by Paul Janish. Various rituals are embedded and a number of fusty, dourly cop-like unspoken rules -- all of which converge upon Do Not Appear To Be Having Too Much Fun -- are not-quite-posted, but followed all the same. Every game is different, which is the fun of it. Every game is -- outwardly and in its broader design and in general -- similar, which is the comfort of it. If you like baseball, this is part of what you like.

Some enjoy the ritual and the ritualism more than they enjoy sudden surprising departures from it, and others are the other way around.

But this is a continuum, and we've all got our places on it. Some enjoy the ritual and the ritualism more than they enjoy sudden surprising departures from it, and others are the other way around. Each side can, if so moved, caricature the other. The surprise-seekers are know-nothing brats or stat-nerd sophists. The others are butter-churning puritans, stuck on process and order. Their whole pilgrimage, even if it's just from a couch via remote, is primarily about seeing the sites and visiting the various shrines to mouldering, martyred ideas, where they grumble darkly and shuffle on.

These are different trips to the same seats, which is of course totally fine. We watch baseball to have fun, and to have the type of fun that's funnest for us. If the pursuit of a crystalline performance of starchy order is your thing, then enjoy that thing. There's some beauty in it, and even those of us who watch the game for something else -- for the little avant-garde flourishes within those old lines -- can recognize that the old lines have their elegance. Baseball is a good game. Everything works.

But the various longstanding things, the so-specific distances between bases and rules governing conduct within those lines and the whole sepia liturgy sanctifying the informal rules until they look like the other ones -- these are not the only interesting or noble things about the game. The game's meticulously curated history is interesting, and adds depth to the experience of watching a game, but it is also written by the victors.

Which means, here as everywhere else where history is leveraged for brand-building purposes, by bosses and their marketing teams, all looking to create something flat and glossy enough to stick a price tag on. It's good to know the bigger story, to care about what happened before this evening's first pitch. But it's also good to remember that there is, underneath all this weaponized lore, a game, and that the game is protean and weird and alive. Which, finally, brings us to Yasiel Puig, and the people who are not just worried but actively upset about the history he's making, so wildly and heedlessly and awesomely, from one game to the next.

This has been, as baseball seasons go, a pretty enjoyable one. There are awesome young players doing awesome things, and a bunch of intriguing pennant races, and the meta-spectacle of Alex Rodriguez in his Baroque Period. But, for the most part, the baseball has been pretty good, and certainly good enough to make the various ulcer-flares of the baseball discourse look that much stranger in context.

There's not just one way to do this, of course, and if people want to give Ryan Dempster a teary Dead Poets Society ovation when he purposefully fires a fastball at some jerk's ribs or SMDH to beat the band about some ill-defined decline in the game's General Virtue, then that would certainly be their business. It's both easy and wise to tune out the scowl-fart hymnal of the Men's Sports Crustacean Chorus, or at least turn it down -- it has always been with us, and will be as long as editors believe there are people who read about sports in order to find a shape for various angers. Anyway, if there's a choice between watching Yasiel Puig play baseball and reading various veteran columnist types fume in variously loaded language about how much they would like to discipline him -- and there is -- it's clear which option is more likely to remind you of why you like baseball. It's still our choice to make.

This isn't to say that it's not worth rebutting the excesses and pointing out the more lurid silliness of the imaginary controversies surrounding Puig; our own Steven Goldman did just that last week, and quite well. This isn't to say that Puig doesn't screw up in ways that hurt his team. Puig himself knows that he does. The manufactured part is the idea that this -- that is, a 22-year-old rookie who just moved to the United States sometimes wandering outside the various grump-o unspoken rules of his new home -- is somehow a situation that must be dealt with as urgently, sternly and humorlessly as possible.

Of course, all this crustoid huffing and aggrieved fundamentals-humping could just be a manifestation of August being August, and the result of some weary and not-so-interested-at-the-moment columnist types writing with one eye on the golf course or TV hit or a prime nappin' sunbeam. But while a lot of this looks like trolling -- Andrew Sharp could not have written this column any better, for instance, right down to the standalone "Hoo, boy" paragraph -- we also might do well to take it at face value.

So let's assume that there are honestly people who care about baseball -- whether for a living or any of the other reasonable reasons to care about baseball -- who are honestly more dismayed than delighted by the experience of watching Yasiel Puig play baseball. We know who some of these people are -- national baseball columnists at major publications and websites, veteran pros who show up on ESPN's popular fake-argument program Five Men And Sometimes Jackie MacMullan Get Strident. We can guess at the rest. These are those two sides from earlier, the traditionalists and their antagonists, finding a new DMZ across which to lob the old bile-missiles. 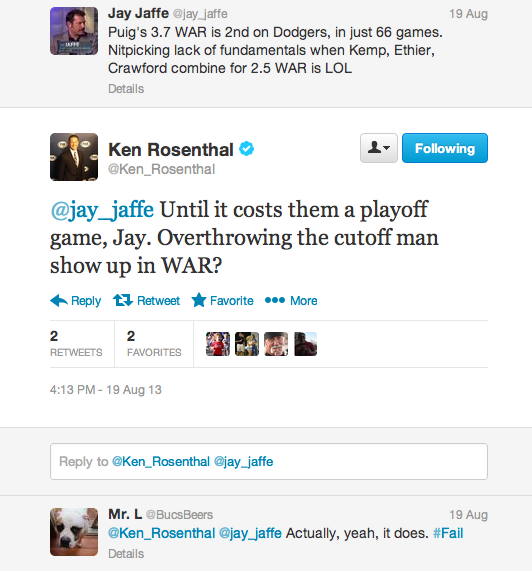 We can, through some of the semi-loaded language used in what's written about Puig, make some other, less-flattering guesses about what some of this is about. All this stuff about "taming" and "teaching a lesson," all the implications that Puig is dumb or unserious or dangerously childlike, all the puffed-up calls for him to be broken down and remade in the poker-faced on-message image of the game -- this may well be harmless, a case of mostly silly thoughts innocently snagging and dragging some seriously heavy historical freight. It may not be, too, but it objectively scans differently when it's written about a 22-year-old black Cuban player than when it was written, some years ago and in slightly less urgent tones, about Bryce Harper.

The associations and the echos are there, if you want to see and hear them -- or they're not, and see you in the comments -- but I think the diagnosis is actually simpler and drearier than that. The whole Puig thing, all this kayfabe-y point-counterpoint, seems less about style (or race, or stereotypes about the relationships between the two) than it does an old, boring baseball proxy war between the game's traditionalists and everyone else -- a new way to have an old, endless argument.

This is the greatest disservice done to Puig. If it seems silly (and, maybe more to the point, wasteful) to take the weirdest, rawest, most mercurial and electrifying talent to debut in some time, the lightning strike catalyst of one of the great in-season team turnarounds in recent memory, and reduce him to a tussle-point... well, it is silly, it is wasteful. Puig looses fresh awesomeness in every game -- even his screw-ups are novel, baroque, utterly odd -- and the familiar rage-barnacles wonder why he can't just be more like Aaron Rowand. The other side, quite reasonably, can't seem to stop itself from pointing out how silly that is.

The debate stinks because it is designed to be circular, and to get louder with each trip around the circuit.

This is, finally, not really a very good or embraceable debate, and it's not improving. That's not just because each side's position by definition can't be disproved by the other side's arguments, although that doesn't really help. The debate stinks because it is designed to be circular, and to get louder each time around the circuit. So with cycle around the track it has less to do with Yasiel Puig and more to do with the circuit itself. That, more than anything having to do with how these narratives get debated, is precisely what's so wearying about the debate.

What's more ridiculous about this still is that, at the center of it, is one of the most electrifying -- and, because he so frequently blows through the game's speed limits and stop signs, surprising -- players that the game has seen in years. He does his thing on that familiar field, at the center of a giant honking beltway that's bumper-to-bumper day and night. There's nothing ennobling about traffic, but it looks even sillier rolling slowly past all these clearly marked exits for the great green diamond at the center of it all, and for all those drivers' persistence in choosing another seething trip around over the opportunity to watch some baseball.

• GIF collection of the slowest pitches thrown this season

• Do the right thing: A plea to Bud Selig

• Max Scherzer should lead Cy Young race (regardless of wins)

• What if the Dodgers and Red Sox didn’t make a supersized trade in 2012?