Matt Harvey reaches what is an unfortunate but seemingly inevitable rite of passage for a young pitcher, and we reach the same point in the regrettable affliction of young-pitcher fandom.

"Raiders of the Lost Ark" isn't best remembered for its incisive dialogue, but there is a line at the beginning of the picture that stays with you. In an inspired teaser segment that sets the tone for the rest of the film, archaeologist Indiana Jones dodges poisonous darts, leaps over chasms, and outruns a giant stone sphere the size of a McDonald's franchise in order to recover a golden idol from a jungle temple -- at which point he is basically mugged by a rival and relieved of his hard-won trophy. "Dr. Jones," the competing archaeologist taunts, "Again we see there is nothing you can possess which I cannot take away."

Baseball is like that when it comes to great young pitchers. The latest case in point is Matt Harvey of the Mets, who, we learned this afternoon, will be shelved with forearm soreness that may be indicative of a turn ulnar collateral ligament of the elbow, an injury that almost inevitably leads to Tommy John surgery. The Mets will idle Harvey in the hopes his swelling can recede and they can get a clearer picture of his innards. At this point you can bid the Mets' ace adieu for the 2013 season and there is every likelihood that some or all of 2014 will be lost as well.

The Mets revolution that was going to be led by Harvey, Zack Wheeler, David Wright, and 22 other guys to be named later was always a longshot to come together, but the odds against it now seem even greater; a top three of Harvey, Wheeler, and next year's messiah, Noah Syndergaard, might have been formidable enough that the team could get by with the kind of flea market offense and bullpen Sandy Alderson has patched together this year. Last season's A's showed that a team with a strong enough pitching staff and an off-brand attack (Yoenis Cespedes had the sole standout full-season campaign, while the team got surprisingly good partial-season performances from Brandon Moss, Chris Carter, and Josh Donaldson) can win.

Scattered pictures of the smiles we used to have: Amazin' Avenue on Matt Harvey's UCL injury

Timing, though, is a bitch, and the Mets don't have it. Whereas catcher Travis d'Arnaud and somewhere-in-the-infield-we-swear guy Wilmer Flores are now in the majors, and sundry minor leaguers such as Brandon Nimmo, Cesar Puello (temporarily vanished via Biogenesis suspension), Dominic Smith, and others look promising, they are all developing on their own schedules and on a slower pace than the pitchers -- as they take their time filtering up to the big leagues, players such as Wright age and pitchers such as Harvey get hurt. Iceberg-like, the roster takes one step forward, two steps back.

Consider this year's Kansas City Royals, who are bobbing about around the .500 mark like a cork off Cape Fear, thanks in part to a breakthrough by first baseman Eric Hosmer and some excellent work in the bullpen from closer Greg Holland as well as Luke Hochevar, Tim Collins and Aaron Crow. All five of those players will be eligible for arbitration this offseason. The Royals' payroll is already the highest in team history. While the likely departure of free agent starter Ervin Santana will free up some cash, it won't be enough to cover all the raises that are going to be due these players. Even if the Royals greatly raise their payroll ceiling, other possibilities will be foreclosed by the financial commitments the team will have to make to retain these players -- and they still won't have a championship-level club. The Royals have talent -- some of it -- but their timing is off. 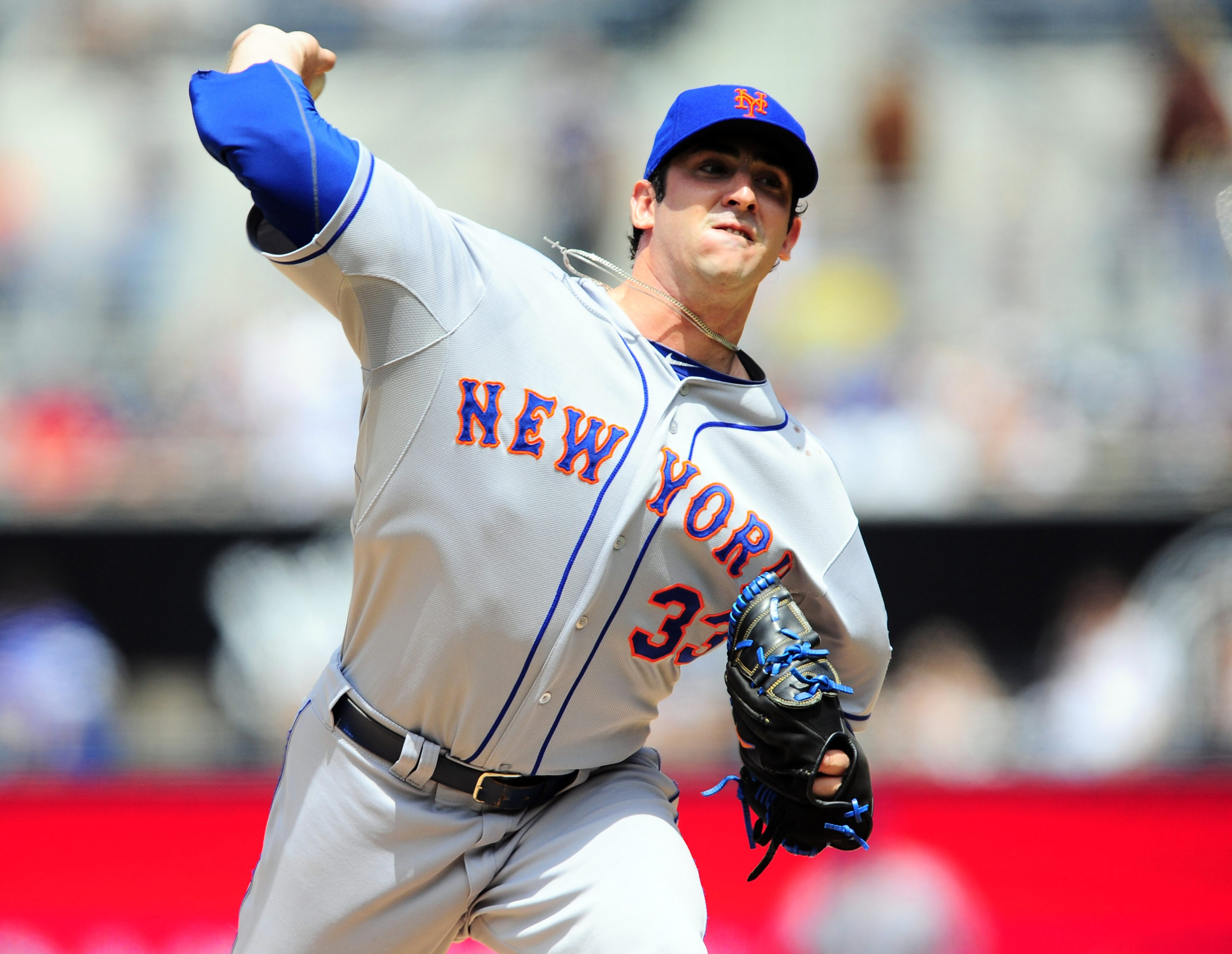 But this is not so much about the Mets' future as to the great unfairness of baseball, the way the most promising young pitchers are designed to dash one's hopes. Every Strasburg or Harvey that comes around is as much or more a candidate for surgery as he is the Hall of Fame. Some recover to go on to Hall of Fame-level careers anyway (Roger Clemens, assuming he ultimately makes it, is the great example here -- he had surgery to repair a torn rotator cuff in August 1985 and was still going more than 20 years later), but most just fade. It has ever been thus. There was a pitcher named Pete Donohue who came up with the Reds in 1921 who, if you're ever flipping through the old record books, might jump out at you -- he had three 20-win seasons by the age of 25. Not a lot was written about the guy at his peak and practically nothing after, but it's clear that he had just okay stuff, great command, and, like all pitchers who are at one point or another are described as a "workhorse," was incredibly durable until he wasn't. He was 103-67 (.606) with a 3.30 ERA and 1443 2/3 innings pitched through his 25th birthday and led the National League in innings pitched a couple of times, 31-51 (.378) with a 5.10 ERA in 668 2/3 innings thereafter.

To update his story to modern times, add between 60 and 80 years and replace his name with that of Dwight Gooden or Mark Prior. Pretty much everything else remains the same. The history of pitching is also the history of pitching injuries, and though it seems like more hurlers than ever are undergoing surgery, it's far more likely the case that diagnostic tools have improved so dramatically that we can see the need for it more clearly than ever before. A pitcher like Donohue was doomed to meatball his sore-armed self out of the majors and eventually out of the pro ranks altogether; a pitcher such as Lefty Grove had to muddle through until he could figure out how to reinvent himself after arm problems (his came in 1934); Matt Harvey has other, presumably better options.

The only problem with resigning ourselves this way is that we have something like causality with Donohue, Gooden, Prior, or all-time disabled-list champion Bret Saberhagen. We can see where their managers might have been more careful in their handling. Conversely, tyro hurlers like Harvey, Stephen Strasburg, and, most infamously, Joba Chamberlain were handled with kid gloves and got hurt anyway. Writing about Chamberlain in the 2012 edition of the Baseball Prospectus annual, I quoted Phillip K. Dick: "There is no perfect defense. There is no protection. Being alive means being exposed; it's the nature of life to be hazardous." This is still the truth of pitching. Like a cardiac patient set loose in a donut shop, their every action is inherently self-destructive. For every Clemens or Tom Seaver or CC Sabathia who can more or less hold up to the strain for a lengthy period of time between surgeries (Seaver's strikeout rate dropped in 1979, the season before he had his first real arm problems since reaching the majors in 1967 -- Sabathia should take note) there are dozens more who can't, even if they have arms touched with a combination of moonshine and lightning like Harvey.

As Strasburg and dozens of other Tommy John survivors have shown over the years, up to and including ol' Tommy John himself, a pitcher can come back from this procedure and still have excellent results -- it just takes awhile, and who wants that? We have shown through our coaches, managers, and general managers that yes, we can have nice things -- give us toys of this quality and we will treat them like the collector's items they are. Alas, they break anyway. The only way to keep a pitcher whole is to not use him, just as the only surefire way to avoid dying is never to have been born. It's depressing, depressing as hell, but it's the reality of the situation. Getting too attached to any pitcher is a recipe for heartbreak -- getting too attached to anything or anyone else, too, but the pitchers go faster. As the man in the movie said, there is nothing we can possess that cannot be taken away.

• GIF collection of the slowest pitches thrown this season

• Do the right thing: A plea to Bud Selig

• Max Scherzer should lead Cy Young race (regardless of wins)

• What if the Dodgers and Red Sox didn’t make a supersized trade in 2012?