The rookie sensation was replaced in the top of the fifth at Dodger Stadium.

The Yasiel Puig story, the heartwarming adventures of a free-spirited refugee from Cuba who just wants to play major-league baseball his own way, took another turn during Wednesday afternoon's contest against the Cubs at Dodger Stadium when manager Don Mattingly abruptly pulled him from the game in the fifth inning.

Criticizing Puig: Get what you want, lose what you had 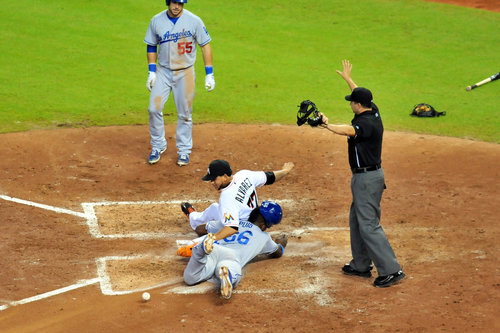 Yasiel Puig's critics want him to master the finer points of playing in the majors now on that theory that he might cost the Dodgers a playoff series they wouldn't have reached without him. Puig is far from perfect, but he is the latest in a long line of flawed winners, and that last part is all that matters.

Puig started the game, playing right field and leading off. He walked to open the bottom of the first and was erased on a ground-ball double play courtesy of No. 2 hitter Carl Crawford. He batted again with one out and no one on in the bottom of the third and struck out swinging. He handled a couple of chances in the field in the top of the fourth. When the Dodgers next took the field in the top of the fifth, utilityman Skip Schumaker went out to right field.

The club confirmed that Puig was removed at the manager's discretion and had suffered no injury. Puig was seen in the dugout "pleading his case," but this has not been confirmed, nor has the suggestion that he failed to slide aggressively on the first-inning double play.

Whatever the explanation, it will wait for Don Mattingly's postgame press conference. Stay tuned for updates.

• The best bullpen in the world, two years running

• Why don't we trust Jim Crane?