MLB vs. Alex Rodriguez: Who is overreaching?

Someone is overplaying their hand in the A-Rod suspension talks, but who?

Share All sharing options for: MLB vs. Alex Rodriguez: Who is overreaching?

One of the great tragedies of literary history is the Oscar Wilde libel trial. You don't have to have read Wilde or even to have heard of him to appreciate the way he destroyed himself. Wilde was a bisexual male living in England at a time when same-sex relationships were against the law. In the early 1890s he began a relationship with Oxford student Lord Alfred "Bosie" Douglas, the son of the Marquess of Queensberry. The Marquess, a cantankerous, disagreeable personality, learned of the relationship and was upset by it -- he was upset by a great many things, but Wilde was particularly distasteful to him. 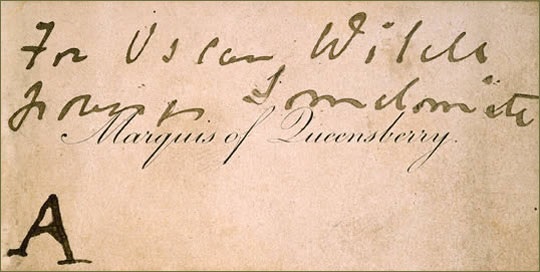 After trying to find various ways of publicly embarrassing Wilde, an internationally famous poet, playwright, novelist, and short-story writer, he finally left his calling card at Wilde's club with the note, "For Oscar Wilde, posing sodomite." First of all, as you can see from the picture at right, the Marquess had extremely poor penmanship, and I am not wholly convinced that he did not write, "For Uscan Wilm, jo obispi Tomdomitu." Everyone at the time read it as "posing sodomite," however, which presented an embarrassment for Wilde because this was a wholly derogatory thing to say about a person given both the prejudice against homosexuality at the time and that such conduct was against the law. These were, in short, fightin' words.

Wilde could have let it slide, but he was goaded by Bosie into suing his father for criminal libel (Bosie had some issues of his own to work out). The one defense to an accusation of libel is to show that you have written truthfully, and it was true that Wilde was a frequent and enthusiastic participant in homosexual activities. It was a relatively simple matter for the Marquess to demonstrate this with letters, witnesses, and Wilde's own flippant testimony. The Marquess was found not guilty, which meant that Wilde, having brought the suit, was liable for his legal expenses and bankrupted. In short order Wilde was arrested, charged with gross indecency and sodomy, convicted, and sentenced to two years hard labor. He emerged a broken man and died just over three years later.

Alex Rodriguez expected to be in Yankees lineup Monday, but suspension looms 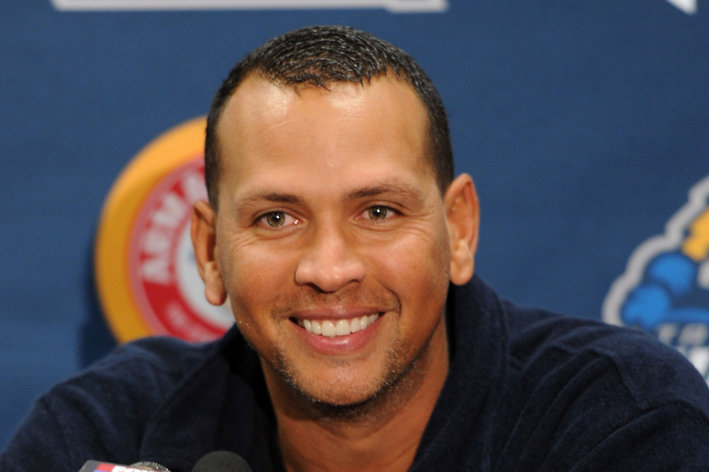 The third baseman plans to file an appeal immediately so he can play against the White Sox Monday.

The Wilde-Queensberry confrontation is a tale of great hubris and overreach. Wilde gave his enemies the power to destroy him and they took it. Fast-forward to the present, and head across the Atlantic, and we find someone in the collision between Bud Selig's Major Lawyers of Baseball and Alex Rodriguez's Legion of Super-Attorneys is making the same mistake. It appears it's going to be some time before we learn which side is playing the part of Oscar Wilde.

There is actually a third candidate for the Wilde role here: Tony Bosch. According to a New York Times story published Sunday, Porter Fischer, Bosch's former investor, was inspired to turn over the Biogenesis documents that began this whole imbroglio to the Miami New Times when Bosch reneged on payments on a $4,000 loan. "He stood up and walked right up to me and said, ‘I'm Dr. Tony Bosch, what are you going to do about it?'"

People playing the part of a doctor without a medical degree should really know better than to ask questions like, "What are you going to do about it?" There is a whole universe of possible answers, none of them good.

So put "Doctor" Bosch in his own special corner, but there is still plenty of room among the remaining actors for the Most Overreaching Player award. At the most basic level, either Major League Baseball has overstated its case or Alex Rodriguez is delusional and/or receiving very poor advice. Think about the parameters that have already been laid out: The standard punishment for a first violation of the Joint Drug Agreement is 50 games, and that appears to be what most of the players on the Biogenesis list will receive. Ryan Braun, who failed a test, successfully appealed on a technicality, and then (to borrow from Monty Python) danced about on the JDA's grave singing "Hallelujah!" was given only 65 games off. For Alex Rodriguez to deserve an even greater sanction than Braun, one that departs from the 50-100-life scheme laid out in the JDA so drastically that something between 200-plus games and life has been contemplated, he must have done something far worse than fail a test -- especially since insofar as we know he hasn't failed one.

We then move over to the Collective Bargaining Agreement, which states that the Commissioner can discipline a player "for just cause for conduct that is detrimental or materially prejudicial to the best interests of Baseball." This decision can be brought before an arbitrator and "the issue to be resolved shall be whether there has been just cause for the penalty imposed."

For Rodriguez's case to be ported over from the JDA to the CBA, it would seem likely that he either (a) recruited other players to Biogenesis, as has been rumored, or (b) attempted to obstruct MLB's investigation through the purchase and destruction of documents or the intimidation of witnesses, as has also been rumored. There is also (c) all of the above. Either or both would seem sufficient to justify a penalty in excess of the JDA's schedule of punishments, but it's unclear how an arbitrator might look at the matter. 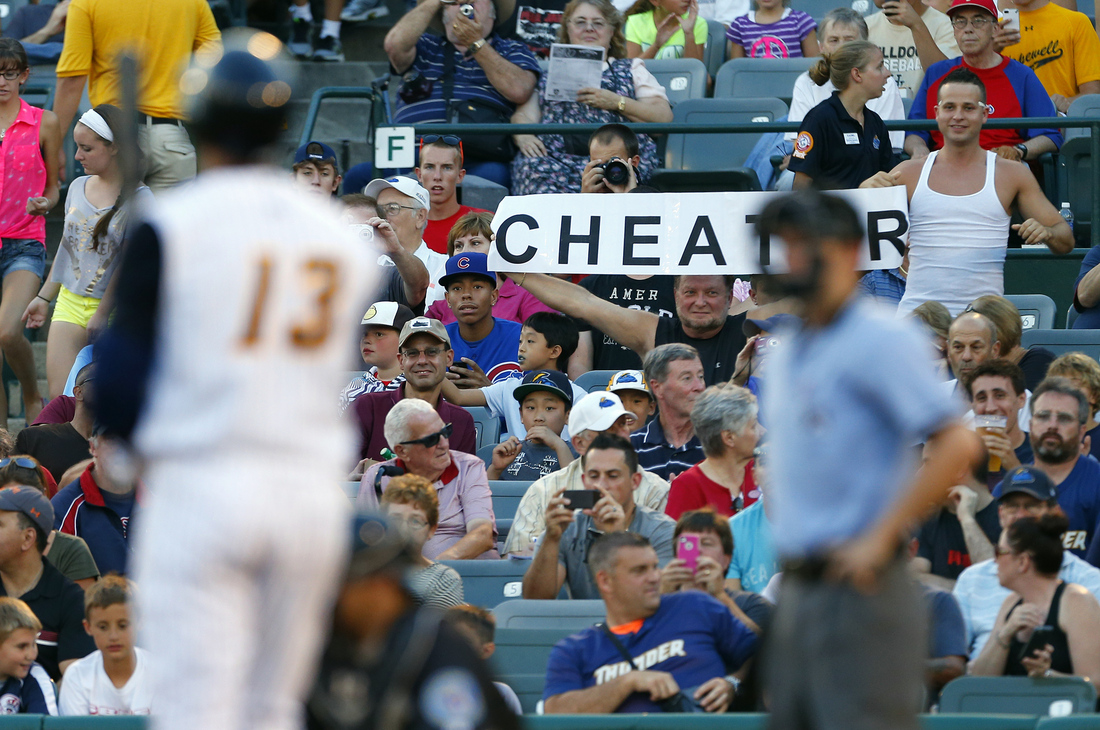 Now let's consider MLB's motivations, which include maintaining the appearance of a clean game, ensuring the JDA is respected, and getting this whole damned thing over with. Suspensions of 50 games, issued as soon as Monday, would allow the players to finish with the suspensions before the 2013 season is over, and even for those players to return in time for the playoffs. These players could go through the offseason, and in some cases free agency, without the specter of banishment hanging over them. We're getting all this information third-, fourth-, and likely sometimes fourteenth-hand, so perhaps Baseball's motives have been prettied up somewhere in the telling, but their most basic desire seems to be to get through all of this with as little pain as possible, but to get through it nonetheless.

Given that, ask yourself this: Would they make trouble for themselves by indulging in some longshot persecution of A-Rod? The logical answer is no. If they didn't have cause, they wouldn't pursue him in this way. They don't need him to serve as the star-level example -- Ryan Braun has already done so. If they could have dispensed with Rodriguez in the same manner as all the other players, they would have. They must have evidence, strong evidence, and confidence that they can make the case and have it stick.

Alex Rodriguez and his cadre of lawyers and flacks have been presented with this information. Yet, he seems to see the case primarily in terms of a conspiracy to defraud him of his contractual rewards. While it is true that any extended banishment of Rodriguez would come as an undeserved windfall to the Yankees (they're the idiots who signed such a self-defeating contract in the first place), it is difficult to believe that MLB's motivation is in any way related to New York's profit-and-loss statements. Indeed, given that a great deal of MLB's negotiating position vis-à-vis salary and bonus caps has been designed to constrain teams like the Yankees, you would think that having the dead weight of Rodriguez's contract acting as a drag on the Steinbrenners' check book would be viewed as a positive.

I'm as eager as the next member of the proletariat to read evil motives into everything Major League Baseball and its undead Commissioner does, but this particular accusation seems farfetched. By departing from the carefully bargained-for routine, they risk consequences in future negotiations with the Players Association which was already twitchy about the Commissioner's historic powers to levy discipline outside the boundaries established in the JDA or for on-field violations. The CBA includes a provision for the Players Association to reopen negotiations on the CBA purely based on the Commissioner's use of those powers. Whereas it seems unlikely that A-Rod's case would be the nail that deflates our era of labor peace, you really don't want to be playing Jenga with that particular pile of bricks.

Alex Rodriguez to be banned by MLB without further negotiation 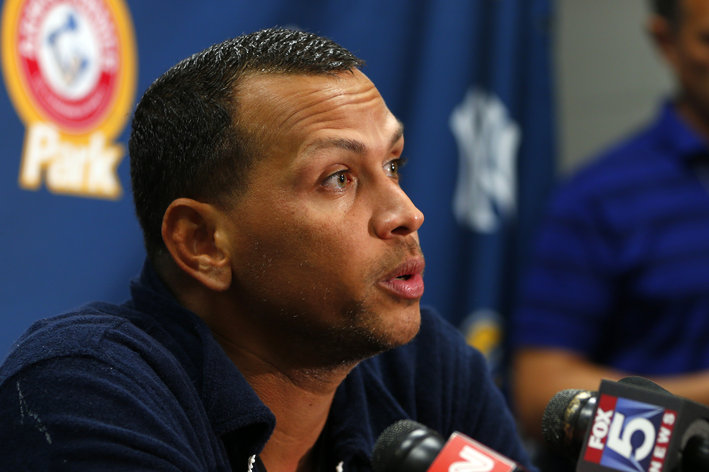 Alex Rodriguez contacted MLB and the Yankees, but his request to negotiate a suspension settlement was rejected. ESPN now reports A-Rod will be banned for the remainder of 2013 and all of 2014.

Which brings us back to MLB's evidence. Rodriguez will be gambling his future on an arbitrator seeing his crime as merely a first-time violation of the JDA, and therefore only worthy of a 50-game ban. Alternatively, an arbitrator might see that the JDA is purely concerned with the enforcement of a regime of drug prohibition, and its penalties only consider the use of banned substances. Its design did not contemplate a player trying to subvert the entire system by leading credulous fellow players to a promised land of undetectable chemicals or conducting a cover-up of same.

I'm no lawyer, but it seems to me that such activities are properly the concern of the Commissioner's powers "involving the preservation of the integrity of, or the maintenance of public confidence in, the game of baseball," and that Rodriguez's grievance is, therefore, doomed -- at which point it's off to the courts we go to watch A-Rod spend millions to protect the millions that he had coming to him.

In short, it may well be years before we find out who the official Oscar Wilde MLB '13 is, but at this moment it seems likely to be Rodriguez -- unless, that is, someone on Baseball's table has really misread the cards they're holding.

• The anatomy of a one-pitch strikeout