Alex Rodriguez should be allowed to take all of the drugs

Share All sharing options for: Alex Rodriguez should be allowed to take all of the drugs

I have never seen Alex Rodriguez play baseball, nor watched an entire baseball game in over 20 years. The last baseball I watched at all was the end of the Braves one-game playoff in 2012. I don't remember who they were playing because I cared about watching people throw garbage on the field in Atlanta. On the scale of great events in Atlanta history, this is where it falls in terms of importance: 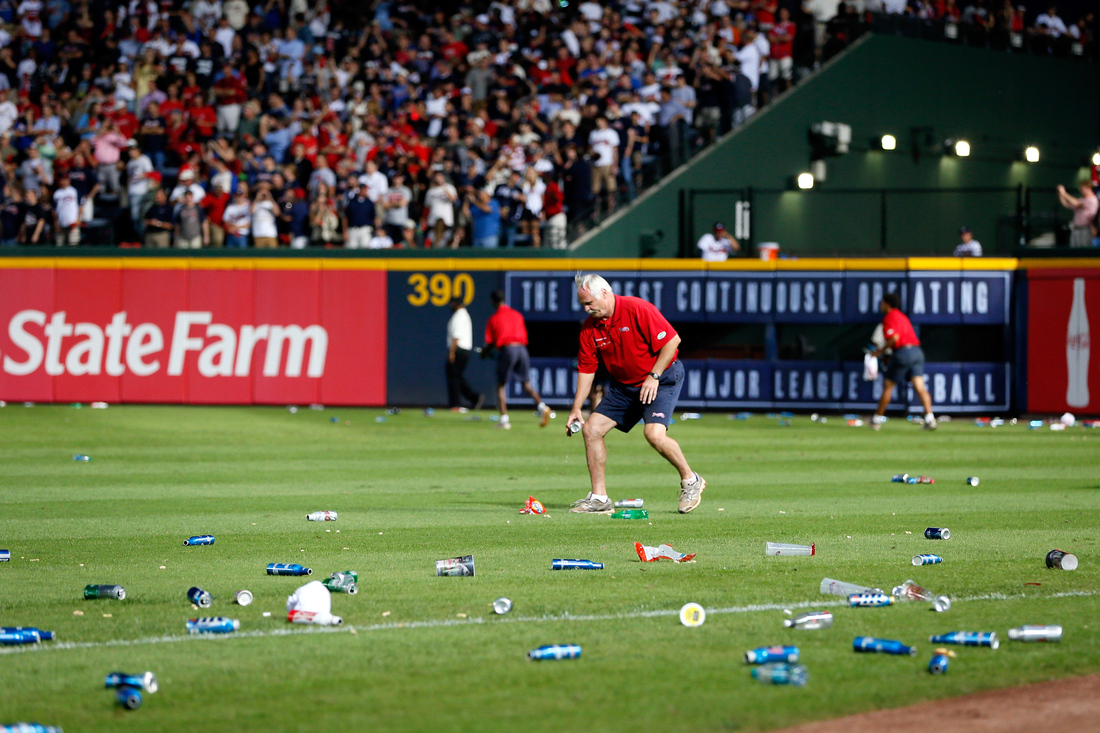 This field-littering brought to you by Drinkability (and Getty Images).

I also did this that night:

I will need Alex Rodriguez to be allowed to take as many drugs as possible, for as long as he likes, and in combinations that would kill professional cyclists and banned powerlifters. I will need him to be allowed to play baseball under the influence of these drugs. Finally, I will need you to allow Alex Rodriguez to play baseball as our forefathers did: with whatever equipment they liked, and cutting as many corners as they want on the way towards home base and glory.

I'm not saying this will be fair. I don't know much about Alex Rodriguez, but I do know this: he really, really likes taking steroids. So would you, if you could. Modern steroids are amazing, and can turn a middle-aged man into a giant clump of indestructible veiny grapefruits arranged around the supersized skeleton of what was once a normal human being. They can keep you in playing shape long after your natural expiration date has passed, and can turn you into Alex Rodriguez. And being Alex Rodriguez is awesome, because he's very rich, talented and has accentuated that by taking a tremendous amount of awesome, expensive and powerful steroids.

And I want to see what happens when we maximize the Alex Rodriguez experience. Namely, I want Alex Rodriguez to be immune from the strictures of our mortal world, and the petty rules of baseball. I want him to be what baseball fans desire most: not just a villain, but a supervillain for the entire sport to blame for everything, a universal bulletproof scapegoat. Baseball needs a Dark Knight, and somewhere on the hot corner in the Bronx, he waits, probably sweating something so tainted with bootleg pharmaceuticals he's not allowed near open flame or pregnant women.

He will take drugs. Not necessarily the performance-enhancing ones, mind you. Alex Rodriguez will be granted immunity from all federal and state narcotics laws. He will be allowed not only to work with labs like Biogenesis, but to serve as their consultant and human guinea pig, providing live data and feedback as he uses their products in the field. He may turn blue and start screaming about fireflies eating his brain in the middle of an at-bat, or start eating a base mid-inning. This is both a bug and a feature of the program.

Furthermore, Alex Rodriguez may take them in the dugout, and if logistically possible, while striding to the plate. A Bane-type mask pumping pure nandralone into his lungs or a belt-mounted HGH pump are possibilities. He may also be permitted the use of an IV stand for supplements provided the stand has rugged performance tires provided by an appropriate sponsor. A caddy will be permitted as an assistant for at-bats featuring the IV stand.

In response to all queries about Rodriguez's flagrant drug use, Bud Selig will shrug his shoulders, sigh, and say "Someone's gonna have to rein that guy in one of these days."

He can, if he likes, become terribly obese. Or should, immediately, balloon to somewhere around 350 pounds. A-Rod will be allowed to hit with the immediate substitution of a pinch runner from home plate, and if necessary use a custom vehicle of his choice to get to the plate. Bud Selig, when asked about this unusual rule exemption for the morbidly obese Rodriguez, will shrug his shoulders, tug at his weird compression socks, and say, "Man, that guy. Just, yeah."

He can use a giant, superlight bat, and a special rubber ball thrown by a pitching machine. Rodriguez will be permitted the use of this ball-and-bat combination. He alone will be allowed to use it. All Rodriguez at-bats will take place under home run derby rules except those involving the Golden Globe Ball, a special LED-lit baseball allowing Alex Rodriguez to grab as many spectators from the front row as he can carry around the bases. Thanks to his intense use of illegal steroids and inhuman lifting schedule, this could be up to four people at a time.

He will be allowed to use a very large glove. The glove will be big enough for Rodriguez to relax in, and contain pockets and chambers for snacks. Fielding interns will perform his duties as he berates them for poor effort and sloppy technique. He may stop the game for a smoothie break at any moment, and will. Rodriguez will offer the pitcher to Selig, and as Bud's frail, terrifyingly spindly fingers reach for it, Rodriguez will dump it on his head. Then he will laugh. Oh, how will he laugh!

He will be allowed to make out with Miss Betty during games. Alex Rodriguez's sidekick Miss Betty will be allowed to sit in his lap, chew gum loudly and wave to the crowd throughout the game. This will take place in his luxury suite, a tower mounted on a pillar above third base, accessible by elevator. The luxury suite will have a lap pool, sun deck and a full bar. The shower will accommodate four. Bud Selig will comically attempt to enter A-Rod's "treehouse" and be rebuffed by a feisty Miss Betty every time! Rodriguez has the right to sublet the "treehouse" to his boy James "P.D" D'Angeles, a producer, childhood friend of Rodriguez and unlicensed chiropractor.

• Bryce Harper gets beaned, teams get in Twitter fight

• Biogenesis: Agents speak out against ACES